September 05, 2013 10:00 AM
AdBlock's anti-advertising crowdfunding campaign meets its goal, and then some.

In an irony almost too rich to be real, AdBlock, the much-discussed browser extension that strips ads from web sites, is about to launch an ad campaign.

Less than a week ago, AdBlock founder Michael Gundlach, posted video asking AdBlock fans to donate money to "bring AdBlock to the world." 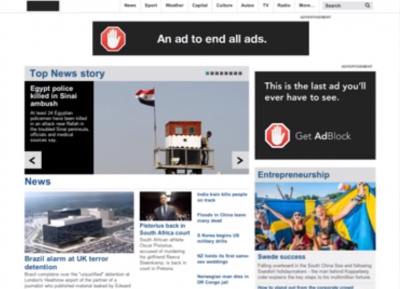 And so far the internet has not let him down, raising over $55,000 dollars to date, far surpassing its original goal of $25,000 dollars. The funds will help AdBlock run conventional online ads, and place a billboard in Times Square as well.

AdBlock is actually a pretty good use case for mass marketing. A common knock on ad-blocking software is that it's adopted only by a niche, tech savvy user base. AdBlock tacitly acknowledged this arguement in its video, bemoaning the fact that 7 of 10 people "don't even know that an ad-free internet exists." The campaign plays on that lack of awareness, asking its fans to help bring Adblock to the rest of the internet.

AdBlock's adoption is already significant in some ways. The extension is used by 80 million people and, according to Mr. Gundlach, downloaded over 100,000 thousand times each day. The downloads per day have increased by 20% since the start of the campaign, said Mr. Gundlach. "People are spreading the word already," he said.

Aiming for the Super Bowl
At over $55,000 dollars raised, the campaign has surpassed funding goals to both get the campaign up and running, and to purchase the Times Square billboard. Next on the list? A full page ad in The New York Times and a Super Bowl TV commercial. While the Super Bowl commercial seems out of reach at over $4 million, the Times ad seems achieveable at just $150,000.

When reached for comment, a Times spokeswoman declined to say whether the paper would accept the ad, telling Ad Age it would have to meet its "advertising acceptability" standards. Assuming the ad is not profane or overly aggressive though, it may indeed be accepted. In which case, we may be in for a spectacle, watching a newspaper still trying to figure out its digital business run an ad for a company seeking to cut off a signficant source of that revenue.

Anti-advertising crowdfunding campaign meets its goal, and then some.