Coders Compete at Manhattan Event to Hack the Trackers

Ghostery, a subsidiary of Evidon which offers a browser extension that exposes tracking technologies and allows people to opt-out from them, aims to change that. 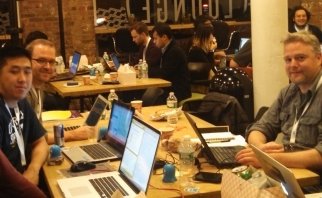 The company corralled a roomful of coders tasked with crafting new tools that highlight digital data tracking on a recent Saturday in WeWork Lounge, a co-work space on the edge of New York City's Chinatown.

Winning teams developed applications that make data tracking more tangible to everyday users. But it was a long time getting there.

"I do a lot of managing and I like to write code," said Reed O'Brien, principal at tech consultancy Koansys (above, right), explaining he'd rather be writing computer lingo than in business meetings. Hence, his decision to spend his Saturday at a hackathon. "I figured I could come and write code for 12 hours."

He didn't have quite that much time. Hack the Trackers contestants had around eight hours to come up with ideas for privacy tools then build preliminary versions of them.

At the end of the day teams presented their final work as coders, Ghostery staffers and event judges nibbled on hors d'oeuvres and sipped an electric-blue vodka concoction inspired by Ghostery's azure logo.

Visualize privacy
One group built a tool that visualized the number and types of ads served during a browser session. The application launches a vibrantly colored web page cluttered with squares and rectangles representing actual ads, each in a hue attributed to the company that served the ad.

Another team offered a service that alerts people when online registration forms collect data the user isn't aware is being gathered. If people have auto-fill enabled in their browsers, it is possible for publishers or ecommerce sites to grab auto-fill information even if registration forms don't show fields for that information.

Mr. Powell's team Toto -- named after the terrier who pulls back the curtain in the Wizard of Oz -- was among the two top vote-getters. The team's browser plug-in exposes companies tracking user data online by surfacing photos of the firm's top execs. For instance, if Google tracking is detected, the face of Google Executive Chairman Eric Schmidt appears on the page.

The other top-rated entry came from team Falcon. Rather than focus on the privacy aspects of data tracker proliferation online, their tool measures the amount of time that tracking technologies add to page load time. The system works in conjunction with the Ghostery app, allowing users to opt-out from tracking by particular companies.

For the next month, the Ghostery community can vote for Toto or Falcon. The winning team scores a visit to South by Southwest next year, accompanying Ghostery.