What a Publicis-Omnicom Merger Means for Media Companies

July 29, 2013 12:15 PM
The merger of Publicis and Omnicom will likely change how media is bought, but TV networks and publishers are downplaying the possible impact on their leverage.

Publicis Groupe and Omnicom Group executives are clearly looking forward to wielding enhanced power in the media business after they merge their companies into one new behemoth. 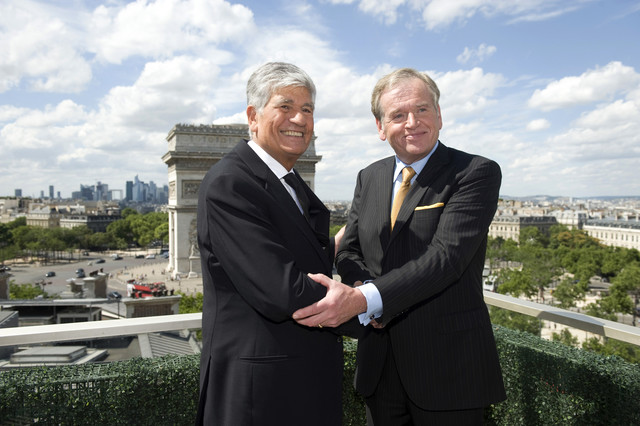 "I think we'll be the first stop, whether you're starting a new company or you're media company coming to try to sell out the Grammys or the Super Bowl," Omnicom CEO John Wren said on a call with analysts Monday afternoon. "I think the first place they will come every single time every single day is to us."

And media executives are putting on a brave face so far, arguing that the massive scale created by the marriage won't automatically undermine them in rate negotiations. The media business is too big even for a Publicis Omnicom Group to truly dominate, one TV executive said. "I am not worried right now about the leverage it could use in negotiations," the executive said. "I don't see any one person being able to handle all of it. It would take a miracle worker."

Publicis Omnicom Group agencies are also expected to negotiate autonomously at least at first, much as Publicis-owned ZenithOptimedia and Starcom MediaVest Group often buy media separately from one another now.

But if Publicis Omnicom eventually bundles the media scale of its affiliated agencies -- much the way WPP's Group M approaches the market -- it could drive down media prices, according to Pivotal Research analyst Brian Wieser. GroupM typically negotiates for large amounts of media and then fits the inventory into clients' plans, he said. On broadcast TV, where executives are already struggling with fragmenting audiences, further consolidated buying would make business that much harder for networks.

"There will still be unique media properties such as sports programming that are 'must-have' and which specific clients want," Mr. Wieser wrote in a research note. "But we see it getting incrementally harder for media owners to bundle those properties with inventory that marketers are going to be increasingly indifferent towards."

He estimated that Publicis Omnicom and GroupM together will account for as much as 70% of a given broadcast TV network's ad revenue.

Information sharing is another area where the combined entity may threaten ad sellers' pricing power. "It's daunting the size and amount of information the combination wields," the TV executive said. "It's scary. The two will have a very good sense of spending in the entire market, across categories and TV, print and digital, while we are left guessing."

Outsiders are already thinking about ways to help media companies handle the new giant -- by selling them services and insights. "On the media owner front, they will need leverage of their own to get more value for their media," Simulmedia CEO Dave Morgan said Monday in a memo to staff, "very good news for us and our Audience Network and for Open Access tools and services that enable them to drive better yield from their audience."

An executive at another TV network found a silver lining, though, suggesting that the merger could actually help with negotiations because it would undermine the leverage that now belongs to GroupM.

There's also such a thing as too much size, argued Bill Koenigsberg, CEO of Horizon, the largest independent media agency in the U.S. "You get to a point where you are too big and can't move so I think they will be captive by their own size," he said. "You can't beat the market when you are the market. You set the market, and everyone tries to tuck in below where the market is set. You can't take $1 billion off table and walk across the street to someone else. They can't afford to take it."

And GroupM sounded skeptical after the merger was announced, questioning whether Publicis Omnicom would consolidate buying in practice. "They are making it clear that a primary motive for the merger is achieving scale in media buying," said Dominic Proctor, global president at GroupM, in a statement. "However, neither Omnicom nor Publicis was able to bring their investment teams together effectively as individual companies, so it will be fun to see if they can now do it together. Getting scale in media investment management is critical for clients, but it only works if it all joins up."

Michael Clinton, president-marketing and publishing director of Hearst Magazines, sounded a positive note, calling the merger "two first class companies joining forces" and saying both Omnicom and Publicis are big supporters of magazine brands. He also suggested that publishers aren't without leverage of their own.

"Magazine brands have lots of valuable customer data that will continue to allow us to work with key media agencies," Mr. Clinton said in an email.

The merger should have less impact on traditional media than on digital media, a fragmented marketplace being increasingly bound together by automated, algorithm-fueled buying, some observers said. "The reality is there is a fair amount of scale on the part of GroupM already today," said David Bank, analyst at RBC Capital markets. "The merger doesn't change much for traditional media because it is scaled already."

Digital is more ripe for change, according to a TV executive. "This is about the agencies figuring out how to make digital a scale model," the executive said. "Digital video is currently fragmented and labor intensive. This could put some efficiencies in place."

Omnicom's Mr. Wren and Publicis Groupe CEO Maurice Levy took pains Monday to say they won't take under advantage of their new clout at the bargaining table. "It's in our interest that the media can bring to us the connections that we need and we need to compete on a very fair basis," Mr. Levy said.

The merger creates a new behometh, but TV networks and publishers argue that they can keep their leverage -- and even find silver linings.