Tool has signed John X. Carey, the director of this year's Cannes Titanium prize winning Dove's Real Beauty Sketches, to its roster. A Los Angeles-based director of branded documentaries and commercials, Carey has 21 Cannes Lions to his name and has also won a CLIO for his narrative-based eBay work. Other awards include an AICP award for short film for The Anti-Drug, Harlem Elvis, while his other clients include Google and Goodwill. 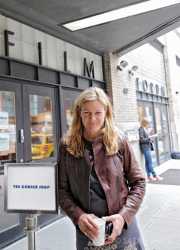 The Corner Shop, the new production company formed by by Anna Hashmi and Peter Thwaites, has signed Oscar-nominated director/cinematographer Ellen Kuras to its roster, its first signing. Her first feature documentary 'The Betrayal' (Nerakhoon) received an Academy Award nomination for Best Documentary, an Independent Spirit Award nomination and won the Primetime Emmy for Best Documentary in 2010. She has directed commercials for Nike, AT&T, Delta and Honda amongst others. As a cinematographer she has collaborated with Martin Scorsese, Spike Lee, Jim Jarmusch, Dave Chappelle, Sam Mendes and Michel Gondry, (the latter on Eternal Sunshine of the Spotless Mind.) 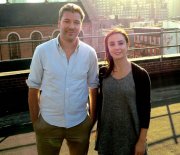 Bossa Digital, a digital sister production company to Hornet, has opened in Brazil. Bossa, founded by Andrezza Valentin and Hans Weiss (pictured), will be represented by Brazilian live action and animation studio Lobo. In the US, the company has worked on interactive digital projects for the likes of Coca-Cola, Hyundai, the Walking Dead, and Lexus. Lobo's clients have included Volkswagen, Ikea, Target, FIAT and Diesel. 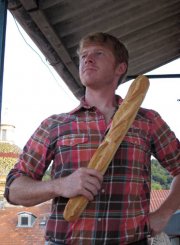 Passion Pictures has signed director Jon Saunders to its roster, based out of its New York studio. Saunders moves from Psyop where he spent six years directing and creative directing work for clients such as Amex, TED, Mio and Converse as well as creating gaming trailers for the likes of Wolfenstein and Dishonored. Saunders' work also includes game development and illustration work for apparel.

London-based live action production company th2ng has added directing duo Scott & Jon to its roster. The pair have been directing together for over seven years, with their work including commercials, digital media, gaming, documentary and film. They won a Gold Revolution award for "Listerine Mouth Vs Life," which received 4 million hits on YouTube. Other work includes "Cell', a Cannes C21 award-winning made-for-mobile drama series, which went on to be aired in America on FOX.

London based production company Knucklehead has signed director William Armstrong for international representation. The London-based director, who has directed work for Jaguar, will maintain his existing representation in Germany and Ireland, where he owns his own production company. 28-year-old Armstrong last year won a Young Director Award in Cannes and Best New Director in Kinsale.

Uber Content has added director Matt Shakman to its commercials roster. Shakman is has directed TV shows including Mad Men, Revenge, House, The Good Wife and It's Always Sunny in Philadelphia (as co-executive producer and main director.)He is currently in post-production on his feature debut, Cut Bank., starring Liam Hemsworth, John Malkovich, and Billy Bob Thornton. He made his debut in the commercial world with a comedic holiday spot for Tide out of Saatchi & Saatchi NY and several promo spots for ESPN.

TV and film editor Mark Everson has joined the Whitehouse for commercial projects. His TV reel includes the Bafta award-winning Peep Show and The Mighty Boosh while he has also edited numerous documentaries for the BBC, ITV, Channel 4 and Sky Atlantic. His film work includes Noel Clarke's 4321 and Alan Partridge: Alpha Papa.

The Cavalry Productions, a commercial and digital production company headquartered in L.A., has signed director Gil Green for exclusive spot representation in the U.S. Green is known for his music video work for artists such as Usher, Diddy, Lil Wayne and Robin Thicke in addition to spot campaigns for Bud Light, Timberland and Pepsi and short films for the Miami Heat. DNA will continue to represent Green for music video work in the States.

New York and LA-based Schrom has signed specialiast food storytelling director Anneke Schoneveld for commercial representation. Her work has appeared in such feature films as Tenure, Blue Valentine , and Night Catches Us. She manages her own culinary blog, Balsamic Reductions where she has developed a series of short food films.

Sonic branding company Man Made Music has promoted Lauren McGuire to senior vice president, client services and brand development. McGuire joined Man Made Music in 2011, following three years with Kaplan Thaler Group focused on the pharmaceutical industry. Since she joined the company, McGuire and her team have managed a portfolio of clients including AT&T, FX, and Hertz.

Comma Music has promoted Becca Major to executive producer based in Santa Monica and hired Andy Lykens for the new position of integrated producer, based in New York. Major was previously senior producer in Comma's Chicago studio. Lykens was previously manager of independent music publisher Imagem and has also worked as director of Non-Stop Music.

All The Latest Production Moves From Around The Industry