A new creative hot shop came onto the scene in 2012, even though it's been around for 64 years. DDB New York might be one of the old timers in the industry, but its exciting output over the past twelve months makes us eager to see what more it has to offer in 2013. 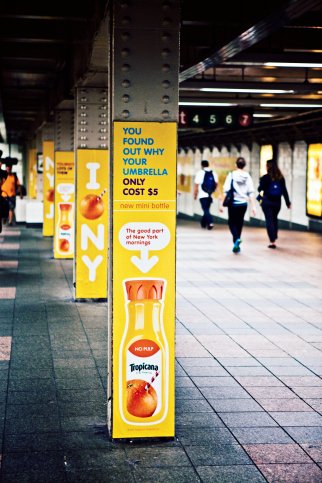 Under the leadership of new chief creative officer, Matt Eastwood and ECDs Menno Kluin, Janet Guillet and Joseph Cianciotto, the agency has turned out a series of standout moves on a variety of platforms. One early bright spot was Tropicana's morning commute campaign. Vibrant out-of-home and print work with pithy copy perfectly encapsulated the small trials and tribulations of quotidian life, from getting on to the wrong train, to figuring out just why your umbrella was so darn cheap. The cure to these annoyances? Some orange juice, probably.

The agency also pulled off some masterful work for not-for-profit organizations -- like the popular campaign for Water for Life, which gathered #firstworldproblem tweets and had them read out -- to heartbreaking effect -- by people in Haiti. In another pro-bono project for the same organization, the agency placed drinking water cups near New York City's most polluted water sources, dripping pipes and stagnant, fetid pools, to highlight that in many parts of the world, people actually consider that their regular drinking water.

But perhaps our favorite work was for New York Lottery, a series of television spots and print ads based on the organization's "That Kind of Rich" tagline, featuring wildly implausible and hilarious scenarios like having Cyndi Lauper as your own personal radio, how you might use the Lincoln Tunnel -- and this delightful ad featuring a very long reverse-drive.

Having a talented typographer on staff, Juan Carlos Pagan, the Pinterest-logo designer who joined the agency as head of design and was one of Creativity's "Creatives You Should Know" last year, also led to some cool font work. For the New York Lottery, the agency designed a new font using real $100 bills that was then used to spell out OOH ads.

With a mantra of reinvention, we're excited to see what this shop gets up to in 2013