Yahoo Has Seen Its Future; In One Word, It's Products

Tech Company vs. Media Company? It Must Be Both -- Media Alone Isn't Good Enough

July 23, 2012 01:00 AM
Yahoo needs to build the tools and services that bind its 700 million users into its world, services such as Mail, Yahoo Finance, and Sports.

Yahoo's courtship of Marissa Mayer began in May at a dinner at incoming board member Michael Wolf's Manhattan home. It proceeded in extreme secrecy -- so extreme that while Yahoo's top execs started to suspect a candidate was in the wings, they didn't know who it was. 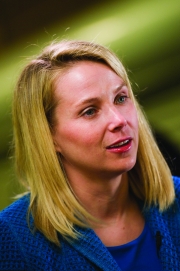 The board was terrified that news of the courtship would leak to AllThingsD's Kara Swisher, like it had for the last two outside candidates Yahoo had seriously considered, News Corp.'s Jon Miller and Hulu's Jason Kilar. Both of those candidates publicly withdrew, an embarrassing setback for the board, which was concerned the publicity would poison the process.

But the board was unconvinced that Mr. Levinsohn's deal-making and media savvy would be enough to save Yahoo. The economics of content aren't good enough, and Yahoo doesn't have the firepower to pony up, say, the $100 million YouTube is spending on original channels or the hundreds of millions more Netflix is spending to acquire rights to TV and movies.

Yahoo needed to be a product company again, and media alone isn't a good enough product. Rather, Yahoo needs to build the tools and services that bind its 700 million users into its world, services such as Mail, Yahoo Finance and Sports. The debate of Yahoo as a tech company vs. a media company has been settled: It must be both.

By all accounts, Ms. Mayer wowed the board in interviews. While Mr. Levinsohn made a case for maximizing what Yahoo is today, Ms. Mayer represented what Yahoo could become, a company that builds products instead of chasing search -- as it did for nearly a decade -- and social, which is now sapping the company of its once-formidable engagement with users.

Ironically, Yahoo is spending less of its resources on product than at any point in its recent history. Pivotal Research analyst Brian Wieser calculates that Yahoo spent 18% of revenue on product development in the first quarter, compared with the high-water mark of 27% in the third quarter of 2009.

Major upgrades to the user interface of core media properties such as Yahoo Sports and Yahoo Finance seem to be low-hanging fruit and were scheduled to go live before the drama of the past few months unfolded, according to a person familiar with the matter. But product investment is needed elsewhere, especially when two Yahoo products that have shown little innovation over the years are perhaps the company's two most important traffic drivers.

"Yahoo's entire value is built around starting points -- the home page and email," said Bill Wise, who was the president of the Right Media ad exchange when it sold to Yahoo and stayed at Yahoo for three years post-acquisition. "The only reason [Yahoo] can afford all the good content is the scale of the homepage and email."

With those two products growing increasingly stale, and today's youngest generation of internet user gravitating toward social networks instead of portal pages or even email, Yahoo is facing a not-so-distant future in which it'll need to replace the core traffic-driving engines that create value in its media properties.

A Facebook integration has produced promising early results, but no one honestly believes that partnership alone is enough. Instead, the assumption is that Yahoo will have to create new, powerful products in areas such as mobile, where the company's efforts up until now have largely been poorly timed or poorly conceived.

The mobile newsstand app Livestand—which Yahoo hoped to monetize with beautiful interactive ads dubbed "Living Ads" -- launched into an already crowded field in the fall and was killed less than seven months later. "It was the right idea but at the wrong point in the market," said Group M Next CEO Chris Copeland.

In a telephone interview, Blake Irving, Yahoo's former product chief who left the company in March, disputed the notion that Livestand's issue was its timing. "Tablets are a brand-new category," he said. "The number of folks using them is still minuscule." Instead, he said two other factors derailed the product: One, the first release did not live up to expectations; and two, there was an internal battle over whether the product should be a platform for other publishers in addition to Yahoo or a Yahoo-centric technology.

"As soon as we determined not to go down the path of being a platform -- that was one of the things Scott [Thompson] determined -- it just wasn't as valuable," he said. Mr. Irving acknowledged that that difference of opinion was a main reason he resigned. He was not aware that Yahoo had shuttered Livestand.

The jury is still out on another product, three-month-old Axis, a mobile-search app and desktop-browser plug-in that focuses on displaying search results as images. And, of course, there's Flickr, the widely adored photo-sharing product that Yahoo acquired in 2005, which has since lost its way along with its core user base.

The flops and missed opportunities are easy to identify. The solutions, less so.

Looking at the state of the company, one has to wonder if the tech and media sides of the business ever complemented one other. Insiders say yes, but the revolving door in the C-suite and Yahoo's inability to retain engineering talent made matters worse. In the summer of 2008, for example, engineering, product management and marketing for global products such as Mail, Yahoo Search and the Yahoo homepage were centralized, creating a disconnect between that group and the media side of the business. "That's where things got lost," one insider said.

Last year, Mr. Levinsohn, the media boss, and Mr. Irving, the product chief at the time, attempted to establish more regular contact between the two sides of the business. The two organized a working group of execs from each side to try to create alignment and to hash out differences of opinion on key matters. It's not clear what progress, if any, was made.

Putting aside its consumer-facing products, Yahoo's ad-tech technologies have largely fallen behind its competitors as well. Over the last few months, top Yahoo execs have had discussions with Google and AppNexus about selling off or leasing out Right Media. Those discussions, complex in nature, were put on hold while the company waited for the board's CEO choice.

As far as advertisers are concerned, Yahoo is still important -- but for its reach, not the brand. "Yahoo is not the bright and shining object anymore," Mr. Wieser said.

~ ~ ~
CORRECTION: An earlier version of this story identified Bill Wise as the former CEO of Right Media. He was president.

Yahoo needed to be a product company again, and media alone isn't a good enough product. Rather, Yahoo needs to build the tools and services that bind its 700 million users into its world, services such as Mail, Yahoo Finance and Sports.