June 07, 2012 10:15 AM
Tribune Co. begins its last big court fight today, one of two steps remaining before it exits bankruptcy into a newspaper market where values have plunged.

Tribune Co. begins its last big court fight today, one of two steps remaining before the publisher exits bankruptcy into a newspaper market where values have dropped by half. 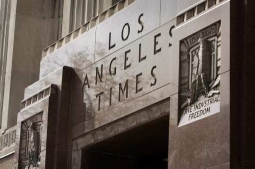 After more than three years, the company is in the final months of its bankruptcy case in Wilmington, Del. When it leaves court protection it will have new owners, including Tribune's senior lenders, JPMorgan Chase, and hedge funds Oaktree Capital Management and Angelo, Gordon & Co.

Should they decide to sell some of Tribune's assets they will confront a newspaper market that 's beset by lower circulation and advertising prices and increased internet competition. Tribune owns the Los Angeles Times, the Chicago Tribune, TV and radio stations in both those markets and investments in cable channels.

Newspapers have fallen in value by at least 50% in recent years, said investment banker Marshall Sonenshine, head of Sonenshine Partners, and media analyst Doug Arthur with Evercore Partners in separate interviews. Mr. Sonenshine arranged the $139 million sale of the Philadelphia Inquirer and its sister paper, the Daily News, while they were in bankruptcy in 2010. They sold earlier this year for about $55 million.

"The real issue for newspapers is we simply have too many of them," said Mr. Sonenshine.

Tribune's new owners will probably put some assets on the market once they gain control of the company, perhaps including the Los Angeles Times and the Chicago Tribune, the properties most likely to attract a so-called vanity buyer. Some buyers may pay a premium to own a prominent news outlet in their region, Mr. Sonenshine said.

Under Tribune's reorganization plan, the company will leave bankruptcy with all of its assets. Tribune and its senior lenders have not said what, if anything, they will sell after bankruptcy.

Chicago-based Tribune is trying for the second time to win approval of a reorganization plan that settles legal claims against the senior lenders that funded the company's 2007 buyout, which critics said left the TV and newspaper company insolvent. Objectors include hedge fund Aurelius Capital Management and other investors that hold pre-buyout debt who are being repaid less than the senior lenders.

U.S. Bankruptcy Judge Kevin Carey narrowed the issues the two sides can fight about when he approved the settlement between a committee of Tribune's unsecured creditors and the senior lenders. The hearing, which may end as soon as tomorrow, will focus on technical questions of bankruptcy law. Should Carey approve the plan after the two sides finish making their legal arguments tomorrow, Tribune would move onto the last step needed to exit bankruptcy. The company must persuade federal regulators to transfer Tribune's TV and radio licenses to new owners, a process that may take several months.

Tribune and its senior lenders have spent more than three years in Wilmington federal court fighting with junior creditors over how to divide legal liability for the buyout.

Billionaire Warren Buffett has been increasing investments in newspapers, buying the Omaha World-Herald last year and striking a deal in May to acquire 63 publications including the Richmond Times-Dispatch of Virginia from Media General Inc.

"Good newspapers with unique content still have economic value and that value may even increase as weaker ones shut down," Mr. Sonenshine said.

But newspapers have lost at least half their sale value in recent years, an investment banker and a media analyst said.