Why is Arianna Huffington in a Toyota Ad on TechCrunch?

Makes a Cameo in One of AOL's Content-Laden 'Devil' Ads

July 19, 2012 04:37 PM
Seems TechCrunch can't escape from Arianna Huffington that easily. Today, we're seeing her influence on the site in the form of a Toyota ad.

A few months back, Arianna Huffington's role changed at AOL when she lost oversight of non-Huffington Post properties at the company, ending a stint that saw her famously clash with TechCrunch founder Michael Arrington after a dispute over what he called "editorial independence."

Seems TechCrunch can't get away from Ms. Huffington that easily. Today, we're seeing her influence on the site again -- literally. This time, it's in the form of a Toyota ad.

The unit (seen below) is one of AOL's so-called Devil ads that wrap content, such as video interviews and maps and social streams, in a big, bad rectangular ad unit. This specific ad features Ms. Huffington front-and-center as the host of a series of video clips.

Why? Turns out that the ad is part of a big Huffington Post-Toyota sponsorship dubbed "Becoming Fearless," which includes a dedicated page on the Huffington Post filled with a video series and other content that fits that ideal, a HuffPo PR rep tells us. Projects such as this one are part of a continued push by the Huffington Post to help brands integrate editorial content into their marketing efforts. (The project's name originates from Ms. Huffington's own book: "On Becoming Fearless ... In Love, Work, And Life.") 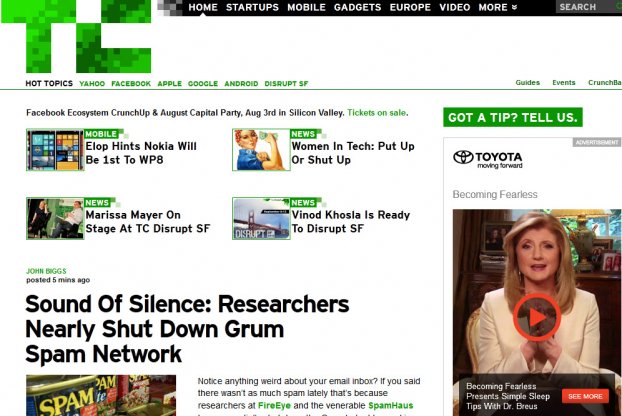 which ensures that I'll never consider buying a toyota for the rest of my life.

Seems TechCrunch can't get away from Ms. Huffington that easily. Today, we're seeing her influence on the site in the form of a Toyota ad.