The political conventions, which kick off on Sunday when Republicans will gather in Tampa, Fla., will be a battle for more than just the presidential candidates. Cable news networks are making major pushes to use the quadrennial events to expand, shore up or win back audiences for the rest of the campaign. 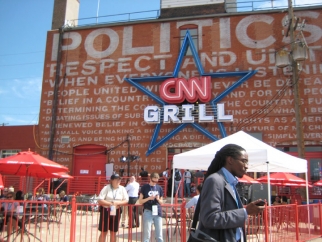 The CNN Grill at the Democrats' 2008 convention in Denver
Credit:
Ken Wheaton

The stakes for all cable convention coverage have been getting bigger: Cable news networks nearly doubled their convention audiences between 2004 and 2008. They've also been closing the gap with broadcast TV, which has continued to shrink the amount of time it dedicates to the gatherings.

But the conventions may matter most this year to third-place CNN, whose ratings hit a 21-year low in the second quarter. The conventions could prove critical to the network's effort to regain viewers heading into the election.

CNN will kick off its coverage of both conventions with a pair of new 90-minute documentaries, one on Mitt Romney and another on President Obama, including interviews with the candidates and members of their inner circles. The network is also bringing back its CNN Grills, which serve as diner-themed home bases for CNN at both conventions and as social hubs for delegates.

CNN anchors Wolf Blitzer, Anderson Cooper, Erin Burnett, Piers Morgan, Candy Crowley, Soledad O'Brien, John Berman, Brooke Baldwin and Suzanne Malveaux will be on the ground in Tampa and in Charlotte, N.C. the following week for the Democratic convention. The lineup will include a midnight edition of "Piers Morgan Tonight" live from the CNN Grill.

CNN will supplement its on-air coverage of the conventions with a robust digital strategy that includes topical blogs, web shows, viewer content via the iReport program, live streams for web users who prove they pay for cable or satellite, and a partnership with Facebook for an "I'm Voting" app.

The network will also be hosting live Cisco Election Roundtables at each convention, where users will be able to go face-to-face with Mr. Blitzer by participating in the chat online.

"As the only cable news channel that has not picked sides in this election, CNN has a unique lens with which to cover these conventions," said Sam Feist, CNN Washington bureau chief and senior VP, in a statement. "In Tampa and in Charlotte, we will give both parties an opportunity to showcase their platforms while also asking tough questions of Republicans and Democrats."

But the network's non-partisan strategy has also been blamed for its loss of viewers to Fox News on the right and MSNBC on the left.

Fox News, the most-watched cable news network, will kick off its convention coverage on Sunday at 9 p.m. with the one-hour program, "America's Election Headquarters," featuring Megyn Kelly and Bret Baier. The two will continue to anchor the show -- a campaign-season program that previously appeared in 2008 and 2010 -- throughout the week at 10 p.m. Commentators will include Brit Hume, Juan Williams, Bill Kristol, Charles Krauthammer, Kirsten Powers, Mara Liasson and Stephen Hayes, along with analysts Karl Rove and Joe Trippi.

Aside from the top-tier cable news networks, channels such as HLN and Current are also stepping up activity for the convention. HLN, a sibling to CNN, is focusing on the delegates and voters rather than on the politicians. Its "Moms Matter 2012" initiative, a partnership with the website CafeMom, will convene a panel of delegates who are also mothers.

But it's not just traditional cable news networks looking for their opportunity. Comedy Central will once again take "The Daily Show with Jon Stewart" on the road for its ongoing political coverage, "Democalypse 2012." "The Daily Show" has been broadcasting from the conventions since 2000. Coverage will also be available on the network's Indecision blog.

For third-place CNN, whose ratings hit a 21-year low in the second quarter, the conventions will be especially critical in regaining viewers going into the election.