It's Twitter's Party, and It Will Make Twitter App Developers Cry If It Wants to

February 25, 2011 02:07 PM
This week's Top 10 Trending Topics on Twitter chart was rocked by a bit of drama within the Twitter ecosystem itself.

This week's Top 10 Trending Topics on Twitter chart -- produced, as always, with our editorial partner What the Trend -- was rocked by a bit of drama within the Twitter ecosystem itself. UberMedia, the company behind the popular Twitter apps UberTwitter and Twidroyd, found its apps briefly blocked by Twitter for violations including, "but not limited to, a privacy issue with private Direct Messages longer than 140 characters, trademark infringement, and changing the content of users' Tweets in order to make money," per a statement released by Twitter. UberMedia scrambled to deal with the various compliance issues and get back into Twitter's good graces. Among the concessions it made: changing the name of UberTwitter to UberSocial.

The whole saga errupted on Twitter -- with the topic taking the 8th place on our chart -- in large part because it inconvenienced tons of Twitter users (the exact number isn't known, but UberTwitter alone is believed to be used by millions). The message was clear: Twitter can and will suddenly turn on even the biggest players in its ecosystem. It's Twitter party, and it will make you cry if it wants to, app developers. Or as I put it back in September, in regard to the overall app ecosystem:

What's increasingly becoming clear is that Facebook and Twitter will happily let barnacle-like startups cling to their hulls ... for a while. These startups, flush with VC cash, busy themselves figuring out clever hacks and complementary services that satisfy unmet consumer demand. Facebook and Twitter watch and learn, and then, if it serves their purposes, they stoically move to scrape the barnacles off while absorbing their ideas and business models, while cheerfully saying, "Hey, barnacles, we're still friends, right?!" 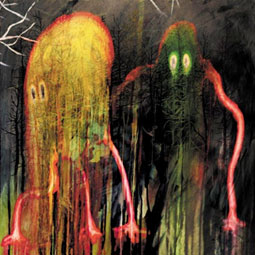 Appropriate soundtrack for this week's Twitter drama: Radiohead's 'The King of Limbs'

Fast-forward to this week: Forget about keeping up appearances of "friendship."

Twitter users, meanwhile, chose an eclectic soundtrack for this week's Twitter party, including Tween Pop (Justin Bieber, in our No. 2 spot), Dance Pop (Lady Gaga, No. 3), and Pretentious Pop (Radiohead, No. 7). I kid! I love Radiohead, the world's leading jam-band for moody snobs (like me). Really, it's totally unfair that there's not yet a Thom Yorke Pudding flavor of Ben & Jerry 's.

By the way, in regard to the rank of our Top 10, Liz Pullen, trend analyst at What the Trend, tells me she really thought Sunday's NBA All-Star Game would be No. 1 this week. "It had a zillion subtrends," she says. "But, like the Super Bowl, the All-Star Game is of interest primarily to Americans, and Twitter is increasingly becoming a global network. Musical artists transcend national boundaries, while most sports competitions are grounded in a sense of place. They are regional interests even if the game is played out on a national stage."

And to the Twittersphere's credit, the No. 1 topic of the week is the one that played out on the international stage: the Libyan uprising.

This week's Top 10 Trending Topics on Twitter chart was rocked by a bit of drama within the Twitter ecosystem itself.