February 03, 2011 11:31 AM
Savvy brands understand that working with startups means more than a media buy.

NEW YORK (AdAge.com) -- Name a hot media app or web service and you'll likely find Union Square Ventures behind it. The New York-based venture capital firm is invested in more than a few of the social-media properties that have been obliterating the communications world as we knew it, including Twitter, Foursquare, Zynga, Etsy and GetGlue. 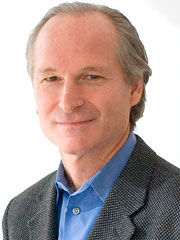 More than ever, brands are scouring the startup world for opportunities and clues to how technology is changing communications and buyer behavior. Ad Age checked in with Brad Burnham, partner at Union Square Ventures and board member for the likes of Tumblr, Meetup and Indeed, to talk about structural challenges marketers need to overcome to work with startups.

He'll elaborate as a keynote speaker at Ad Age's Digital Conference April 6 and 7.

Ad Age: So what can marketers learn from the VCs getting those startups off the ground?

Mr. Burnham: We live in a very specific niche within venture capital that essentially focuses on web services. Most of those services are more and more differentiated by the networks they create, and the relationships they create with users and between users. It has a lot to do with human behavior and motivation. Watching how a service like Twitter, Tumblr or Foursquare engages users, grows, becomes important to them and creates an environment in which users promote the service to their friends -- there's something advertisers can learn from.

Brands should think about their relationship with consumers as more of a network. If you look at it as: "I produce a product, I market a product, consumers buy that product, I'm done," that's not what's happening in these networks we work with. This changes not just the way you package and promote, but the way you think about product development and design, how you engage consumers in that product development. If you look at this phenomenon of social media as just another channel, then you're not understanding the full consequences of what's happening.

Ad Age: Any advice for marketers on working with startups? Are there structural challenges?

Mr. Burnham: In a packaged-goods company you've got some people in research and development, some people in product management and some people in product marketing. Where we're going is that the people in the lab need to be directly connected to consumers because consumers are expressing their likes and dislikes in ways that could be fed back into product development. Right now the interface between the consumer and the product team is mediated through many layers of product marketing and management. The best companies in the future will try to reduce that mediation layer and connect the product innovators more closely with consumers.

Ad Age: Any examples of how brands are working with startups beyond a typical media buy?

Mr. Burnham: An interesting example is Tumblr, a blog network that we're investors in. The way that network works is that users collect things that amuse or interest them on the web and package them in a sort of stream of consciousness, which is then consumed by people who chose to follow them.

A typical brand says, "It sounds like a very active community, lots of page views, I'd like to get my brand in there." Turns out that Tumblr doesn't, first of all, intend to be a typical advertising platform. But the most creative, innovative and forward-looking brands are engaging in Tumblr by creating their own Tumblogs and their own presence within the network. Instead of thinking of this as a space where, for a few bucks, you can buy ads to get people to click and get sent to a website outside the network, they stay inside and are more organic participants.

Ad Age: How important do you think it is for brands to get in on the ground floor with new media companies?

Mr. Burnham: I don't know how important it ultimately is, but we as venture capitalists have seen examples of people very early in a space that build something meaningful, but we've also seen fast followers build some very interesting businesses. I'm not sure it's fatal if a brand wasn't the first. But there is an interesting phenomenon that takes place in this web services marketplace.

We were early investors in Delicious, a social tagging engine which was sold to Yahoo. There were probably 18 knockoffs of Delicious within the year that we were investors prior to the sale and none of those knockoffs gained traction. Some had better features, some had better experiences, but Delicious became established, and as the knockoffs arrived, people said that Delicious was the original innovator, and even though others did a really slick job, they said they're knockoffs and we're not going to move.

Ad Age: Do you expect to see a new Twitter or Foursquare to emerge from SXSW Interactive this year?

Mr. Burnham: I think that it may be hard for a single company to pop out the way Twitter popped out, or the way Foursquare did later. We are now talking about a marketplace where there are a lot more services, there's a lot more noise.

Users already have two or three screens of apps on their iPhones. One more app is not going to have the same kind of impact that Foursquare and Twitter had. I will be interested to watch what happens, but it will be hard for somebody to capture that kind of attention.

NEW YORK (AdAge.com) -- Name a hot media app or web service and you'll likely find Union Square Ventures behind it. Ad Age checked in with Brad Burnham, partner at Union Square Ventures and board member for the likes of Tumblr, Meetup and Indeed, to talk about structural challenges marketers need to overcome to work with startups.