A little more than two months after Newsweek completed its merger with The Daily Beast, landing Beast Editor in Chief Tina Brown to edit Newsweek as well, the latest issue will include 32 ad pages, the most in two years. But a lot of ad buyers still aren't sold on the most-watched media mash-up going. 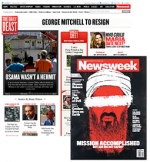 "We're not rushing to put money into Newsweek," one ad buyer said recently. "They have their work cut out for them."

You might ask what it takes to get advertisers and their media agencies excited these days. There's little doubt Ms. Brown is in charge of what may be one of the most-watched experiments in media and journalism today, marrying a fledgling website with a stalwart but flagging print institution, all under the aegis of two unlikely owners, former U.S. Congresswoman Jane Harman and IAC chairman Barry Diller. (Ms. Harman's husband, Sidney Harman, who purchased Newsweek from Washington Post Co. in August and pushed for the Daily Beast merger, died last month at 92.)

Newsstand sales since the March 14 issue, the first one bearing Ms. Brown's stamp, have increased 57% from the period a year earlier, according to the company. With covers on Kate Middleton ("Kate the Great") and the Olsen twins ("America's Next Billionaires") interspersed among those on Hillary Clinton, "The Beached White Male" and international catastrophes, she's redirected the magazine from a prior attempt to make it a variation on The Economist.

Media buyers, to be fair, aren't unmoved. Newsweek's ad pages have declined 34% this year from last year, but fell less sharply -- 22 .5% -- in the first nine issues from March 14 onward, according to the Media Industry Newsletter data.

Ray Chelstowski, the publisher since January, pointed out that his staff only started pitching Ms. Brown's version of the magazine in late February. "We closed 40 new accounts in 40 business days," he said, citing advertisers including Omega, David Yurman, HTC Phones, MSNBC, HBO and Paramount, the kind of lucrative fashion and entertainment brands this version of Newsweek especially wants, and which, perhaps not incidentally, have been editorial and advertising mainstays of the Daily Beast.

But Newsweek is also competing with its bigger rival, Time , whose ad pages have increased 7% year to date and are more than double Newsweek's. And there's a big question about whether combining the Beast with Newsweek actually creates a stronger sell for advertisers, a chief hope of the merger.

"There's some crossover potential here," said Stephen Colvin, CEO of the Newsweek Daily Beast Co. But he also said the two publications have separate advertising ambitions, which may be a function of the fact that , for all the talk about integrated ad buying and breaking down the so-called silos between media, advertisers still set their budgets by discrete categories whether "print" or "digital.""At this point in the marketplace, budget allocations are still done by media channels, not so much by content," said John Nitti, senior-VP at ZenithOptimedia. "That's the challenge."

It wasn't advertising considerations that originally pulled Newsweek and the Beast together. After Mr. Harman's closely watched purchase of Newsweek last year, he approached Ms. Brown to edit the title. Ms. Brown, however, initially demurred, saying she was too married to the Daily Beast to leave it behind. "I'd have to come with the Beast, and I said it kind of as a joke," she recalled last week. "Sidney teasingly said perhaps we should get these two organizations together, and we laughed, and then we really began to think about it."

Given then the lack of an immediate advertising upside to a combined online and print operation, it's unclear how the fused newsrooms will bring in more dollars.

Mr. Colvin said there's a clear economy of scale to achieve in consolidating both outfits, and although he declined to describe headcounts, insiders said editorial staff has shrunk in the past year, mostly through attrition and buyouts. The Daily Beast's staff has gone from 65 to 60 and Newsweek's newsroom dwindled from more than 200 editors and reporters to just over 80 today.

The Beast itself has been on track to be profitable in 2012, Mr. Colvin said, and he further disputes reports that Newsweek lost $20 million last year and the Beast $10 million. "Those aren't accurate figures," he said. "But, yes, there was some loss to both companies."

Critics argue that the merger welded together two businesses but not particularly complementary ones.

"I don't see how the merger was supposed to grow the top line," one person familiar with the negotiations said. "Sidney offered Tina the world, and Barry usually lets her have her way."

"I don't know how anyone can think that ," Ms. Brown said. "Barry supports me, and I feel very fortunate for that , but he doesn't simply let me have my way."

Mr. Diller, who is known for his whimsical business tastes, has built an unusual hodgepodge of internet and media businesses in IAC, a holding company that has gone through a raft of digital enterprises. "He pretty much buys whatever personally interests him," one executive familiar with his workings said. IAC's portfolio currently includes AskJeeves, CollegeHumor and online studio Electus, but it is the dating site Match that drives a significant chunk of IAC's revenues, accounting for a quarter of its income. (Mr. Diller recently stepped down as CEO and handed leadership over to Match's Greg Blatt while remaining chairman and still holding the biggest ownership stake at 34 percent.)

The Newsweek Daily Beast company, by contrast, is too small to show up on the company's earnings report, leading some to point out that no matter what its business worth, the Daily Beast (and now Newsweek) holds personal value for Mr. Diller.

One IAC insider described how the company's various business lines would report in to Mr. Diller and his top officers every month, a formality by some measures, but also a way to hold referendum on each business's ongoing performance. "The Daily Beast always escaped much more unscathed than others," this person said. "It was like [Mr. Diller] gave the Beast a free pass." When asked why Mr. Diller would continue to hold onto a property slow to generate significant revenue, this person suggested, "He probably realized the upside is limited but also that the downside is limited."

According to several interviews with people familiar with the Beast's editorial operations, Ms. Brown can be a demanding editor who doesn't always outline a clear editorial direction or participate in general editorial meetings, which sometimes led to on-the-ground chaos.

"At any given moment, there's mass confusion going on," one person said. "One writer would be working on a story that another person would be working on in from a different bureau. It's an organization where the left hand doesn't know what the right hand is doing."

Ms. Brown counters, "Have you worked anyplace else? Of course, sometimes things like that happen. In a fast-paced, evolving news staff, start-up situation, there are sometimes collisions of purposes. But if you talk to the New York Times, they would tell you that every so often there's a big conflict between the Washington bureau and the New York office. This is true of any journalistic enterprise. But it's clear what the editorial direction is to the readers."

As Ms. Brown sees it, the Beast is designed to be the fast-moving news critiquer as well as a place to break news on world events and entertainment. Articles with a longer shelf-life, meanwhile, are a better fit for Newsweek. "There's a great synergy between the two," she said.

"This is the fourth time I've been in this position," Ms. Brown added, referring to her relaunches of Tatler and Vanity Fair and starting Talk magazine and the Beast. "So I've been in that pressure cooker before. I kind of know the process. It's messy. At the same time, it's exciting. Some people are up for it, and some people aren't -- it's important to know that about yourself."

This is a longer version of an article that originally appeared in the May 16 issue of Advertising Age.

A little more than two months after Newsweek completed its merger with The Daily Beast, landing Beast Editor in Chief Tina Brown to edit Newsweek as well, the latest issue will include 32 ad pages, the most in two years. But a lot of ad buyers still aren't sold on the most-watched media mash-up going.