It's the Best Media Writing of the Week

February 04, 2011 09:14 AM
Everyone had an opinion about The Daily, a rather large and expensive news organization whose wares will be delivered only to the iPad for rather a small fee.

Rupert Murdoch and some high-level folks from Apple who are distinctly not Steve Jobs released what may or may not be the future of media this week. Everyone had an opinion about The Daily, a rather large and expensive news organization whose wares will be delivered only to the iPad for, conversely, rather a small fee.

Mostly people liked it aesthetically but questioned the content (it's a tad light), its distribution and its raison d' etre, which is French for "Why the hell do we need another big news organization to create what's essentially a digital daily newspaper?"

I thought Scott Rosenberg, on his blog Wordyard, did a great job of summing up the challenges:

The Daily's designers are eager to show off sparkling graphics, integrated video, and the swipe-ability that the iPad allows. Unfortunately, they are defining "interactivity" the way the lost pioneers of the 1994-era CD-ROM "multimedia revolution" defined it. They have built a gleaming but limited set of interfaces for users to interact with static, prepackaged content. The web taught us that true interactivity was the interaction between people moderated by the network -- along with the personalization you could build into the network based on those people's behavior.

Speaking of 1994, AOL made the news this week, when a ridonkulous deck describing "The AOL Way" was leaked to Business Insider's Nicholas Carlson. The 58 slides need to be read to be believed, but, basically, they map out all the things AOL plans to try to make its original-content operation work. Let's just say that source development and FOIA training aren't among them. But mantras, north stars, road maps, towns, reviews (both post-natal and plug-in) and pixel perfection are.

Some of AOL's journalists, editors, content creators aren't all happy with the training. "AOL is the most f-----up, bull---t company on earth," says one, who joined AOL in what he calls, "the worst career move I've ever made." Others are more positive, but asked not to be quoted. 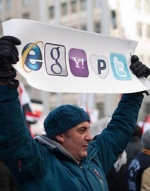 Malcolm Gladwell, citing the blown-out-of-proportion so-called Twitter Revolution in Iran, has argued that the role that social media plays in social action is overrated, a line of thinking that caused Twitter's BFF's to fire up the torches and bust out the tar and feathers. Don't for a second think the goings-on in Egypt have changed his mind, as he relates in a grumpy but good post on The New Yorker blog:

Right now there are protests in Egypt that look like they might bring down the government. There are a thousand important things that can be said about their origins and implications: as I wrote last fall in The New Yorker, "high risk" social activism requires deep roots and strong ties. But surely the least interesting fact about them is that some of the protesters may (or may not) have at one point or another employed some of the tools of the new media to communicate with one another. Please. People protested and brought down governments before Facebook was invented. They did it before the internet came along. Barely anyone in East Germany in the 1980s had a phone -- and they ended up with hundreds of thousands of people in central Leipzig and brought down a regime that we all thought would last another hundred years -- and in the French Revolution the crowd in the streets spoke to one another with that strange, today largely unknown instrument known as the human voice.

Kenneth Cole, on the other hand, took Gladwellian thinking to the next level: He actually used social media to scoff at revolutions. After joking about the unrest in Egypt on the company Twitter feed, Mr. Cole apologized for his offensive tweet and deleted it. That didn't stop a parody Twitter feed from popping up lickety-split.

It takes the awful punning approach from Kenneth Cole ads and, of course, the Kenneth Cole corporate Twitter feed and turns it on its head. Go anonymous, clever tweeters! Here's a sample from @KennethColePR:

You're gonna want to Abu Ghraib one of our hoodies before they're gone. #KennethColeTweets

Apps and HTML5 are increasingly in competition for dominance in the minds and hearts of large-scale content creators. Ken Doctor wrote a dense but clear post for Nieman Journalism Lab laying out the issue and describing the challenges before news organizations that want to keep up. Techy and inside baseball, to be sure, but important stuff for anyone who cares about the future of news delivery:

Apps are still a big news rage in 2011 -- most would pay the price of admission to both the tablet and the paid reader content games -- so the app creation companies are doing land-office business, and big news companies are creating apps even as they focus increasing people power on HTML5. ... That twin development is costly, a headache for smaller publishers, and still another factor separating out the big news boys -- the Digital Dozen I identified in the Newsonomics book -- from the rest of more local, smaller, more struggling news companies. Further, it's just one more example of how the future of the business of news is rooted in technologies, from HTML5 to vastly improved analytics, which, among industry leaders, are now starting to drive strategy and execution.

Rupert Murdoch and some high-level folks from Apple who are distinctly not Steve Jobs released what may or may not be the future of media this week. Everyone had an opinion about The Daily, a rather large and expensive news organization whose wares will be delivered only to the iPad for, conversely, rather a small fee. Like: "They are defining 'interactivity' the way the lost pioneers of the 1994-era CD-ROM 'multimedia revolution' defined it."