How Agencies and Others Donated Time, Money to Help Others

To celebrate the holidays, companies in advertising and marketing around the country decided to forgo traditional holiday gifts, cards and employee parties in favor of giving to those in need. 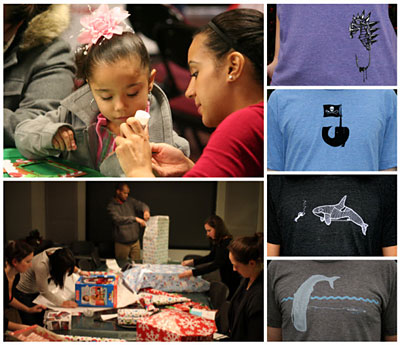 Here's a sampling of some of the good works from this past season:

In its holiday card this season, Cohn & Wolfe asked people to create a ripple effect raising money to help the nonprofit Project Kaisei rid the north Pacific Ocean of the Plastic Vortex, a mass of plastic debris that covers an area the size of France and Germany combined.

The card was inspired by a sculpture created by an eco sculptor who used more than 500 used plastic bottles and dozens of tweet-activated lights. The lights are activated when someone tweeted a trigger word?such as recycle, plastic or oceans?and Cohn & Wolfe pledged to donate $1 to Project Kaisei whenever someone retweeted the trigger words up to $5,000.

The Holiday Twitterball helped generate more than 1 million tweets of the trigger words and saw 337 retweets of the Cohn & Wolfe holiday message, with the agency increasing the bandwidth of its microsite twice to accommodate the activity. The PR agency is donating $5,000 to Project Kaisei as part of its ongoing pro bono commitment to the project.

In place of the traditional holiday gifts, San Francisco-based Hub Strategy made a donation in its clients' names to Sea Shepherd Conservation Society, a nonprofit dedicated to protecting marine life around the world. The creative agency also licensed four original T-shirt designs to Sea Shepherd.

The shirts?depicting a sperm whale firing a harpoon from its blowhole, a seahorse made of twisted and dangerous-looking metal, a narwhal flying the Sea Shepherd flag from its tusk and a diver offering a tulip to a killer whale?will be produced and sold on the Sea Shepherd website. The organization, featured on the Animal Planet cable TV series "Whale Wars," is best known for its aggressive protection of whales and dolphins.

"This is sort of a gift that keeps on giving" said DJ O' Neil, founder and creative director at Hub Strategy.

In lieu of its traditional employee holiday party, Mindshare threw a bash for the residents of the 1,200 units of New York's St. Nicholas Projects, located in one of the toughest, poorest neighborhoods in Harlem. Mindshare volunteers also brought gifts to kids living in the projects.

Joining the agency in giving the party were Mindshare clients and agency partners Macys, Microsoft, AOL and Radio Shack.

The Dec. 15 festivities kicked off a larger partnership between the New York office of the GroupM media services agency and Harlem youth. The agency recently announced a diversity initiative to identify and work with college students interested in careers in the advertising industry. This initiative will include sponsoring internships for several City College of New York students, participating in summer programs and providing guest speakers to schools in the Harlem Children's Zone, an organization dedicated to ensuring that each child in Harlem's worst areas has a proper education and a path to a better life.

Mr. Youth decided to give to students in Laos instead of its clients and partners this holiday season. Working with the nonprofit Pencils of Promise, the New York-based social marketing agency launched Youth4Youth, an initiative to raise $25,000 to create and maintain a preschool in the village of Pa Suk in Southeast Asia.

The agency committed to matching the first $10,000 raised and asked clients, vendors, suppliers and partners to give money to the program instead of any gifts they might have planned to send to the agency. Clients began donating computers, software and other supplies to help the school.

"Here at Mr. Youth, we are lucky to do what we do, and we are all privileged to have received the education, support and mentorship that got us here," said agency CEO Matt Britton. "With Youth4Youth, we're exercising the same diligence, creativity and social networking expertise we deliver for our clients to make a real difference in the lives of the Pa Suk youth."

Instead of holiday cards, Point to Point, an advertising and interactive marketing agency based in Cleveland, handed out $20 to each of its employees and told them to use it to make a difference. The third-annual Change for 20 campaign challenges staff members to change someone's life with the money and document the experience through video, photos and print posts to inspire others to do the same.

Among other initiatives, employees used the money to buy sandwiches for the hungry; diapers and baby supplies for needy expectant mothers; and hats and gloves for the homeless.

"When we started Change for 20, we were amazed at the impact it had on our employees," said agency President-CEO Mark Goren. "We think that if Change for 20 could catch on this year?if we could really inspire people by showing them the impact it has collectively?we could do and be something greater."

Chicago-based Schafer Condon Carter decided to forgo client presents this year and instead went caroling. On Dec. 16, the independent agency raised almost $10,000 for WGN-TV's Neediest Kids Fund through its "Carols for Kids."

"For 21 years we've given a gift to our clients and friends," David Selby, managing partner and president of the agency, told Williams. "This year, we said there are so many people in need of so much help here in Chicagoland and beyond that, what the heck, let's do what we can?take our energy and partner with WGN's Neediest Kids Fund to raise some money for some very special young people."

Vevo, an online video platform, decided to play Santa over the holidays, with more than 30 staffers answering "Dear Santa" letters. Employees chose one or two letters through the New York Cares Winter Wishes campaign and bought the gifts the children asked for, writing a letter to each child.

The New York-based company hosted a gift-wrapping party and sent the packages on to New York Cares to be delivered in time for Christmas.

To celebrate the holidays, companies in advertising and marketing around the country decided to forgo traditional holiday gifts, cards and employee parties in favor of giving to those in need.