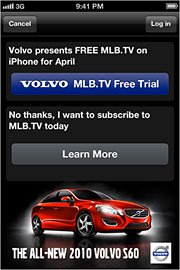 To kick off baseball season, MLB Advanced Media has announced that access to MLB.TV in its iPhone, iPod Touch and iPad apps is free for all of April, thanks to the Volvo sponsorship. (Android users will get one free game per day.) That's up to a $25 value for one month's subscription to the streaming service; users will still have to pony up $14.99 for the apps.

MLB was early to launch iPhone and iPad apps for fans to stream games live and, at last count had 1.5 million subscribers to apps and MLB.TV. It is a leader in streaming mobile video, and it white-labels its technology to other publishers and broadcasters such as ESPN, Turner Sports and CBS Sports.

This isn't the first time the MLB at Bat apps will feature ads. For the sponsorship, Volvo has secured pre-rolls ads during the live stream and banners between innings.

This also marks the second recent auto advertiser to provide consumers free access to content under lock down: After the New York Times announced its new digital paywall, Lincoln offered some readers free access for the rest of the year.

For Major League Baseball's Opening Day today, an advertiser is unlocking a paywall for rabid baseball fans: Volvo is presenting free streaming games on Apple devices for one month.