Survey: Dad's the One to Like in Social Media, Gaming, Entertainment

June 17, 2011 04:06 PM
Dads believe they're spending more time with their kids these days than their parents did, but it skews heavily toward the fun stuff.

Dads, even more than moms, believe they're spending more time with their kids these days than their parents did. But how dads are spending that time skews heavily toward media, entertainment and the internet, according to a new broad-ranging survey by Ipsos. 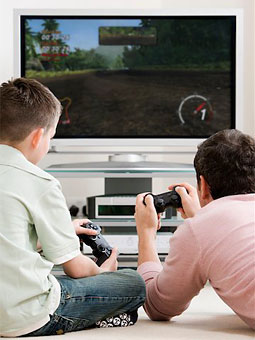 The Ipsos LMX Family survey of 715 parents of kids 12 and under conducted this winter found dads are spending 50% or more time than moms with kids online, playing video games and going to movies, live theater or sporting events.

Overall, by a 72% to 67% margin, dads are more likely than moms to say they spend more time with their kids than their parents did, Ipsos found.

What dads are making time to do, however, is largely the fun stuff.

"Moms are still more than responsible for the cleaning, cooking, shopping and staying on top of everyone's practical needs and wants," said Donna Sabino, senior VP-kids and family insights for Ipsos. "But it is definitely a change, and one for the positive psychologically, that dads are participating more in all aspects, although not to the same level as moms in that day-to-day practical stuff."

As for the fun, 73% of dads said they'd played a video game with their kids in the past week, vs. only 38% of moms. Not surprisingly, the balance was heaviest in favor of dads on "shooter," action and sports games. Moms were also less likely than dads, but by slimmer margins, to play racing or strategy games with kids.

"Dads realize what they do now with their kids has a payoff through their kids' lives in creating good memories," Ms. Sabino said. "I think it's just a smarter generation of dads, and more sensitive to the needs of their kids."

To that sensitive point, more dads in the survey (53%) than moms (45%) said they try to "always find good family movies to watch as a family at the theater."

Dads, even more than moms, believe they're spending more time with their kids these days than their parents did. But how dads are spending that time skews heavily toward the fun stuff.