All the World's a Game, and Brands Want to Play Along

NEW YORK (AdAge.com) -- What's saving the current crop of virtual games from becoming the next Second Life? The humble leaderboard, say some.

Digital games, whether on Facebook or on mobile phones, all employ what developers call "game mechanics," incentives such as points, badges, next levels and achievements that motivate players to keep playing. And a gaggle of brands, from 7-Eleven to JetBlue, H&M and Tesla Motors are counting on people's attraction to competition to get them to be more engaged. 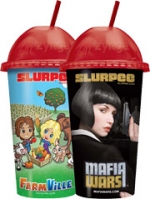 7-Eleven and Zynga connect for a campaign with FarmVille and Mafia Wars.
"Basically game mechanics are a way to get consumers addicted to things," said Tim Chang, principal at Norwest Venture Partners, which has backed many social mobile game companies. "They keep people engaged to keep doing things, as opposed to what goes viral quick: You click, you watch and then never see it again."

One of the best examples is, of course, mobile social game Foursquare, which awards badges as users "check in" via their phones at physical places. Accumulating badges -- and achieving statuses such as the "mayor" -- are motivations to get people to check in.

Mr. Chang plots this trend on what he calls the "game-ification of life," where competition and points are increasingly a part of offline activities, such as shopping with services like Gilt Groupe and Groupon and health and wellness with NikePlus.

Recently H&M ran the first-ever brand integration on MyTown, a mobile game like Monopoly set in the real world, created by developer Booyah. During the campaign, H&M was the most searched location within the game, 700,000 users checked in to its retail stores, and 8 million saw its virtual goods. The game, which has 2.3 million users since launch in December, has since worked with brands such as Travel Channel, Olay and Microsoft Windows.

Keith Lee, CEO of Booyah and creator of MyTown, argues such services are not bound for the fate of Second Life because of their competitive aspect."The difference is that there was no higher level engagement or depth," said Keith Lee, Booyah CEO, of Second Life's popularity decline. "It never gave long-term value to users. Our DNA has been long-term value. In this case, it's real-life benefits and opportunities to do things with friends."

Another small app that motivates users through points, GateGuru, just signed JetBlue. A navigational app for airports, it rewards users for checking in to terminals and rating businesses. Since it launched in December, 125,000 users have vied for points simply to see their name on the leader board -- the road warrior equivalent to being the "mayor" at a given airport. In June, JetBlue will launch a program to reward those frequent travelers and point leaders with airline freebies like plane tickets and vouchers. But what motivates users to launch apps, play games and check in while they're out in the first place?

"You cannot underestimate the power of an increasing integer," said Seth Priebatsch, CEO and founder of mobile game SCVNGR. The Google Ventures-backed game has users complete tasks in the real-world for points. Tesla Motors ran a brand challenge on SCVNGR where users, when visiting dealers, could snap photos of the electric auto brand's roadster or answer quiz questions for a branded badge and, of course, points.

"Our brand activations are not banners and clicks," said Manny Anekal, director of brand advertising at Zynga, whose properties include social games such as FarmVille, Mafia Wars and YoVille. The first branded crop in FarmVille, a game built around raising crops, is coming soon, but Zynga has to be selective about advertising and marketing partners, since brand integrations have to be an "additive experience" for its users, he said. To illustrate, one FarmVille advertiser is Green Giant frozen vegetables.

For now, the publisher is intimately involved with designing brand programs to preserve game play, especially since advertising only represents a sliver of Zynga's revenue. The game company is predicted to pull in $1 billion in 2010, primarily from fees for virtual goods.

Zynga is currently seeking out distribution channels beyond Facebook with sites such as MSN and Yahoo, and even in the real world. Last week it announced graphics from its games will grace Slurpee cups and food packaging in 7,000 convenience stores in the U.S. and Canada. For its part, 7-Eleven is increasingly trying to draw in younger shoppers and hopes partnering with Zynga will help it appeal to millennial gamers.

NEW YORK (AdAge.com) -- Digital games, whether on Facebook or on mobile phones, all employ what developers call "game mechanics," incentives such as points, badges, next levels and achievements that motivate players to keep playing. And a gaggle of brands, from 7-Eleven to JetBlue, H&M and Tesla Motors are counting on people's attraction to competition to get them to be more engaged.