Why Tiny Tresemme Is Rising to Top of Hair-Care Heap

August 30, 2010 01:00 AM
Alberto-Culver's Tresemme keeps gaining share and is mounting a credible threat to become the No. 2 overall brand in a crowded $6 billion U.S. mass hair-care market.

BATAVIA, Ohio (AdAge.com) -- Its unimpressive headquarters adjoining one of the company's shampoo factories in Melrose Park, Ill., looks from the outside a lot like a retro 1960s schoolhouse. It's a space certainly less grand than the headquarters of L'Oreal in Paris, Unilever in London or even Procter & Gamble in Cincinnati. 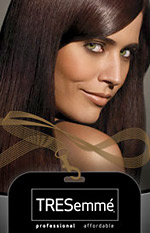 But this relatively humble abode is home to Alberto-Culver's Tresemme brand, which accounts for about a third of the company's sales and is posing a palpable threat to rivals many times its size. Tresemme just keeps gaining share -- to the point where it is now mounting a credible threat to become the No. 2 overall brand in a crowded $6 billion U.S. mass hair-care market this year.

Of course, that's a place L'Oreal's Garnier Fructis won't surrender easily. But one thing is clear: Tresemme, a 63-year-old brand acquired by Alberto-Culver in 1959 and a distant also-ran for most of its life, is showing remarkable spunk in the face of much younger brands from much bigger marketers. Led by Tresemme, Alberto-Culver blew away the competition in organic sales growth last quarter at 12.7%, backed by a 20% increase in ad spending. The brand received $56 million in measured media support last year and $32 million through May of this year, according to Kantar Media. Tresemme works with Mullen, Winston-Salem, N.C., after switching agencies from Campbell-Mithun, Minneapolis in June.

In a hair-care market that's fared poorly during the recession and at-best weak recovery, Tresemme may have found the perfect niche. It's priced between the entry level bargain brands, such as Unilever's Suave or Alberto's own declining VO5, and premium brands Pantene and Fructis.

"Our positioning of professional performance at an affordable price is really hitting a sweet spot right now for women," said Casey Keller, president of Alberto-Culver U.S. The positioning has been around more than 10 years, but since the recession "I think that positioning is even more relevant to women."

Most recently, Tresemme's "professional affordable" positioning has taken the best P&G, almost 50 times Alberto's size overall, could give. A major restage and overhaul of P&G's Pantene, backed by a big increase in ad spending and promotion, delivered a 0.5-point share gain for P&G in the $3.3 billion mass hair-care market (excluding colorants) for the four weeks ended July 11, according to Symphony IRI data, the first full month of the restage. For the same four weeks, Tresemme also gained 0.5 points, backed by a big increase in advertising and promotion too.

As the promotion cooled off during the four-week period ended Aug. 8, Tresemme appeared to hold its ground better than Pantene, per SymphonyIRI data from Deustsche Bank, which showed Alberto-Culver gaining and P&G losing market share in shampoo and conditioner.

Those data don't include Walmart or club stores. And Deutsche Bank analyst Bill Schmitz said the Pantene restage might actually have helped Tresemme at Walmart, where he said Pantene got a slimmed-down product count and shelf space, opening room for Alberto-Culver.

Tresemme remained around $10 million behind Garnier in the 52 weeks ended July 11 and had less than half the sales of Pantene. But it's been growing faster than either. Tresemme is already the clear leader in hair spray and styling products and was the only of the leading brands to gain share in all four major segments of mass hair care, also including shampoo and conditioner, in the past year in SymphonyIRI data.

One of the brand's most successful new products for this year, Fresh Start, a "dry shampoo" at mass, let's women forgo the time -- and expense -- of a full shampoo for a while longer. "We find women are skipping shampoo occasions, either for color preservation or hair preservation," said Mr. Keller. "They're able to spray it in their hair to freshen it up and make it feel nice, look nice, smell nice."

Mr. Schmitz believes Tresemme's former branded-entertainment tie-in with "Project Runway" and current deal with Bravo's "The Fashion Show" has played a big role in the brand's success. Alberto-Culver expects to continue the latter relationship, as well as further bolstering its styling credentials by increasing digital support around Mercedes-Benz Fashion Week in New York next month.

Even so, uneasy lies the head that wears the hair-care crown: The U.S. has had a tendency to anoint a new leader in the mass category about once every decade. Pantene has been an exception, now entering its third decade at the top as challengers such as P&G's own Herbal Essences or Garnier Fructis either stalled or slowed short of a serious threat.

Tresemme is the only challenger that keeps chugging along, and P&G veteran Mr. Keller sees no reason why it can't ultimately claim the title -- though he's making no firm predictions either.

BATAVIA, Ohio (AdAge.com) -- Alberto-Culver's Tresemme brand, which accounts for about a third of the company's sales, is posing a palpable threat to rivals many times its size. Tresemme just keeps gaining share -- to the point where it is now mounting a credible threat to become the No. 2 overall brand in a crowded $6 billion U.S. mass hair-care market this year.