PepsiCo, Tyson, Among Those Teaming Up With Gowalla, Foursquare, Checkpoints to Offer Rewards for Purchase

November 15, 2010 12:00 AM
Consumer foods players are following in the footsteps of retailers like Gap and starting to acknowledge the potential location-based apps have for them.

NEW YORK (AdAge.com) -- The next hot place to check in might just be your grocery freezer aisle.

Consumer foods players are following in the footsteps of retailers like Gap and starting to acknowledge the potential location-based apps have for them. PepsiCo, Tyson and Seventh Generation are among the major companies teaming up with the likes of Foursquare, Gowalla and CheckPoints, promoting programs that reward consumers for picking up products and giving them added incentives to put that product in their cart. 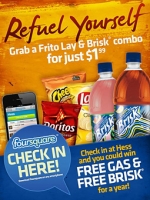 CHECKING IN WHILE CHECKING OUT: Consumers have been rewarded with recipes, sweepstakes and gift cards.
The potential for location-based marketing for consumer packaged-goods brands is "massive," said Bonin Bough, Pepsico's global director-digital and social media. PepsiCo, which owns billion-dollar brands like Gatorade, Mountain Dew, Doritos, Tropicana and Quaker, has been closely monitoring the area. Pepsi, for example, did a charity check-in program with Foursquare last December. That experiment served as a precursor to its first check-in programs with retail partners, launched in the last few weeks.

Through the end of the year, customers earn virtual Tazo bottles for checking in at any Whole Foods, as well as the chance to win a gift card. A week into the Whole Foods program, more than 1,000 virtual Tazo bottles had been collected, according to a spokeswoman. Meanwhile, through Dec. 29, consumers can check in at one of 643 Hess gas stations via Foursquare to get a Brisk and Frito-Lay product combo for $1.99. Via the program, consumers are also entered into a sweepstakes to win free gas and free Brisk iced tea for a year.

Tristan Walker, director-business development at Foursquare, said the PepsiCo-Hess promotion is one of the first cases of a CPG company working directly with a retailer to drive in-store purchases. And he expects there will be many more programs like it. Asked whether Foursquare would be doing more such deals, Mr. Walker said, "Yes. Stay tuned. We have big plans for CPG."

Mark DiPaola, CEO and co-founder of CheckPoints, which counts Tyson and Seventh Generation as clients, believes location-based technology will be a "game changer" for brands. "I think mobile will be bigger for brands than the internet was, because mobile goes with you to the store," he said. "We drive feet to the product, wherever it's sold in the store, even if it's all the way in the back on the bottom shelf."

Once a consumer locates and scans the product for points, CheckPoints' advertisers also have the ability to serve up everything from a coupon to a recipe to a sweepstakes. In the case of Tyson, consumers are treated to a comical game where a chicken is flicked over a goalpost and splashes into a tub of sauce. The game promotes Tyson's Any'tizers Dippin Twists as a good snack choice during football season.

"The goal here is to deliver targeted messaging at that precise moment a purchase decision is made," said Mr. DiPaola. "They're holding the [Tyson's chicken] in their hand, and they're either going to put it back on the shelf or in their cart. At that moment, we deliver messaging that the advertisers help us develop."

Shiv Singh, director-digital engagement and social media for PepsiCo Beverages Americas, also talked about the potential for "check-in-ographics." In addition to gathering demographic and psychographic data on its customers, Pepsi expects it will eventually be able to learn about its customers by studying where they check in and how often.

But, Mr. Singh said, the company is well aware that it's still early days for the technology, especially in the CPG space. Because of that, the program at Hess will be promoted in store with signage. Eventually, he said, offline promotion won't be necessary as consumers become conditioned to check in and look for deals.

On these first two programs, with Hess and Whole Foods, Mr. Singh said PepsiCo is looking to measure how many people check in and how many take advantage of offers. Secondly, the company is trying to understand what type of reward inspires behavior.

"We're extremely excited about mobile. We feel that it's different, as we enter 2011," he said. "For the first time digital is not at arm's length from the consumer when they're at the point of purchase. And that's incredibly valuable to us."

NEW YORK (AdAge.com) -- The next hot place to check in might just be your grocery freezer aisle. Consumer foods players are following in the footsteps of retailers like Gap and starting to acknowledge the potential location-based apps have for them.