What Do Marketers Do When Faced With Fake Ads, Fake Press Releases, Fake News Stories?

October 18, 2010 07:35 PM
Chevron has been hit by pranksters hijacking its corporate-PR efforts. The prank may go unnoticed by consumers, but it raises issues for marketers and media.

NEW YORK (AdAge.com) -- First BP was targeted with a satirical Twitter feed, and now oil giant Chevron has been hit by pranksters hijacking its corporate-public-relations efforts. While the prank may go unnoticed by consumers, it does raise issues for both marketers and media.

The hoax that Chevron is now grappling with is far more elaborate and is timed to the launch of an ad campaign from the San Ramon, Calif.-based company and its lead agency, Dentsu-owned McGarryBowen. 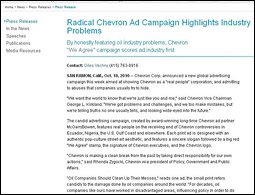 Not only was a fake website created that parodied the real campaign, but fake press releases were sent out, including one posted to a site that looks remarkably similar to Chevron's actual website. That release uses fake quotes by Rhonda Zygocki, Chevron's VP-policy, government and public affairs, and Gordon Bowen, chief creative officer of McGarryBowen.

As part of the prank, there was even a fake story planted on a fake Ad Age site. Ad Age received calls Monday morning from someone purporting to be a Chevron spokesperson saying an erroneous story was posted to the AdAge.com. While the story looked real -- the masthead and frames were swiped from a Marketer of the Year story posted to AdAge.com and the text was replaced with a Chevron story -- the URL was a fake, one that misspelled the "advertising" in advertisingage.com (and there was no byline on the piece).

Between that and all of the fake press releases floating around -- one of which claimed Ad Age had been "duped" by some level of the Chevron spoof -- it prompted confusion not only for Chevron, but for some media outlets that had trouble determining who was spoofing what.

Among those who were fooled by were Southern California Public Radio and Fast Company magazine. An update to Fast Company's post admitting that the magazine was fooled cited activist prankster group The Yes Men as the perpetrators. 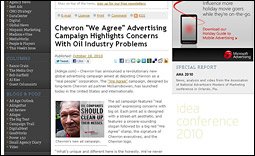 Requests for comment submitted to The Yes Men's website were not immediately returned. McGarryBowen execs also could not be immediately reached for comment. A Chevron spokesman, Morgan Crinklaw, would not speculate on who was responsible, but did say that The Rainforest Action Network, an environmental activist group, has claimed credit in some media stories.

"Unfortunately, there are some out there that are not interested in a constructive dialogue and they have resorted to stunts and it's interrupting the conversation by issuing these fake press releases and counterfeit websites for the sole purpose of attacking Chevron and not engaging in rationale dialogue," Mr. Crinklaw said. Now, Chevron has had to tap staffers to monitor the conversation online so it can immediately address any inaccurate information that appears on blogs or other social-media sites.

The new ad campaign -- the real one -- is the sort of a we're-a-different-kind-of-oil-company messaging that invites the ire of critics decrying past and current business practices and environmental disasters. The spoof seems to be centered on an ongoing legal dispute in Ecuador as part of which Chevron was accused of contaminating the Amazonian rain forest.

The issue of fake PR is one that doesn't seem to be going away anytime soon, and it remains to be seen if marketers and agencies can figure out a way to effectively combat the seemingly greater number of individuals who seem eager to participate in such efforts.

It isn't the first time The Yes Men -- which posted to its 17,400 followers on Facebook today about the prank -- has pulled such a stunt. Describing themselves as a "genderless, loose-knit association of some 300 imposters worldwide" that try to "infiltrate the world of big business and pull off outrageous pranks that highlight the ways that corporate greed is destroying the planet," they've already posed as Halliburton, Dow Chemical and ExxonMobil.

It's the second time in recent months an oil company's PR efforts have been hijacked. In the wake of the Deepwater Horizon disaster, comedian Josh Simpson -- hiding behind the name Leroy Stick -- launched fake Twitter feed @BPGlobalPR. Whether he's now joined forces with The Yes Men isn't clear, but he's certainly interested, having tweeted last week: "I'm at UCLA to hear/meet The Yes Men. Only good things could come from this."

Marketers aren't the only ones being hit by fake PR efforts -- as shown by the website for Heishman Hillard, a spoof of PR agency Fleishman Hillard.

"It's an increasingly troubling issue," said Gene Grabowski, senior VP, Levick Strategic Communications. "We live in a time when some of the most trusted names in news are satire shows like 'The Daily Show,' 'The Onion' and 'The Colbert Report.' We live in an era where satire is now the news source for people. And recently Mr. Colbert testified before congress, so increasingly consumers don't know the difference between satire, comedy and news, so it's only natural that individuals and organizations who want to take advantage of that would launch mock PR campaigns."

Mr. Grabowski said companies will have an uphill battle trying to combat these pranks. "It's like a thumb trap, the more the company tries to defend itself, the more it becomes part of the story and that makes it more interesting. The company being attacked can't effectively fight back itself and that's why these tactics are so effective."

NEW YORK (AdAge.com) -- First BP was targeted with a satirical Twitter feed, and now oil giant Chevron has been hit by pranksters hijacking its corporate PR efforts. While the prank may go unnoticed by consumers, it does raise issues for both marketers and media. The hoax that Chevron is now grappling with is far more elaborate, however, timed to the launch of an ad campaign from its lead agency, Dentsu-owned McGarryBowen.