Targeted at High-School Students, a Rare Effort of Good Advertising for Ad Industry

September 22, 2010 04:35 PM
"Pursuit of Passion: Diversity in Advertising" is a joint project put out by the 4A's and VCU Brandcenter and will make its debut during Advertising Week.

"I had no clue about advertising growing up, didn't think about it much ... didn't think of it as a profession."

That's Frank Cooper, chief marketing officer of PepsiCo, speaking in a new recruitment film designed to address one of the many issues contributing to the lack of diversity in the advertising and marketing industries.

Advertising Age Embedded Player
Dubbed "Pursuit of Passion: Diversity in Advertising," the movie is a joint project put out by the American Association of Advertising Agencies and VCU Brandcenter. It will be screened for New York City public high-school students during a presentation by VCU Brandcenter's Rick Boyko on Sept. 27 and its public premier will be presented by New York Advertising Week Thursday, Sept. 30 at 5 p.m. at the Paley Center for Media.

According to Mr. Boyko, "Pursuit of Passion" is aimed "at exposing, educating and exciting minority high-school and community-college students, as well as their counselors and parents, to the opportunities available in a career in the advertising and marketing industries." Mr. Boyko, along with Cecilia Gorman, VP-director of creative services at Y&R/ Wunderman, Irvine, Calif., served as managing director and producer on the film.

To that end, it lines up a veritable who's who of marketing and ad people, including: Alejandro Ruelas, co-founder and managing partner, LatinWorks; Andrew Hsu, a junior copywriter at Ogilvy; Kenji Summers, strategist, BBH; Rey Peralta, a creative technologist at Mother; Shameka Brown Barbosa, associate creative director, Y&R; Tiffany Edwards, education director, One Club; Emanuel Basnight of Translation; Stanley Lumax, account director, Anomaly; and many others.

4A's CEO Nancy Hill said that when word got out that the film was being made, "people were lining up to be included. Once we started the sentence, 'We're putting together a video of positive role models currently succeeding in the advertising business...' we were barely able to finish before they said, 'Yes!'"

The film is not likely to silence critics who claim that the so-called pipeline problem -- a lack of students and young professionals coming into the industry -- is simply a distraction from bigger issues having to do with lack of opportunity and innate prejudice and racism. And it's certainly not a documentary about adland's woeful past and present diversity figures.

Said Ms. Hill: "If we are truly going to make change, we have to manage diversity on a variety of levels, youth being just one. Attracting multicultural kids and ensuring diversity in the candidate pool for the future of advertising is just one pillar in the strategy. ... We aren't missing or ignoring the perspective that's out there, but the subject of whether there is real prejudice is a more complex issue that will take much longer to tackle."

And the movie doesn't set out to address that issue. It nods toward the need for diversity in the industry and its not-so-stellar past. Faris Yakob, chief innovations officer at MDC Partners, notes: "There has been historical ... lack of representation in all industries rather than just advertising, but particularly in advertising it's important because what we're trying to do is communicate with people."

TBWA/Chiat/Day Chief Creative Officer Rob Schwartz opens the film with the point that the first creative ad revolution -- the one that's about to interrupt Don Draper's world on "Mad Men" -- didn't happen until the industry was flooded by non-WASP forces made of Jews, Greeks and Italians.

Schwartz later ads that "there's work that we never would have done two years ago that we're doing today because we have people from diverse backgrounds."

Overly optimistic maybe, but ultimately this is a recruitment film aimed at students and so it makes the industry seem -- there's no other way to say it -- like a pretty cool and inspirational place to work. In other words, it's the ad industry doing a pretty good job of advertising itself -- which isn't always the case. The project was directed by Charlie Tercek in conjunction with the film-making team Mr. Mr. 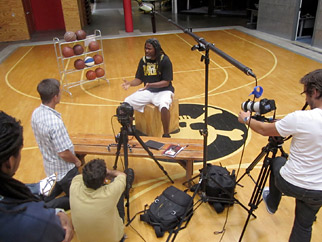 Jimmy Smith being filmed.
There are plenty of award-winning ads dispersed throughout the film, a decent soundtrack, stories about stumbling into the business, about not fitting in and about the creative urge. At one point Jimmy Smith, group creative director at TBWA/Chiat/Day, sporting his trademark dreads, Jordans and a "Sucka Free" T-shirt says, "I hate ties and I hate suits. Can't do it. So if you can come in the office and wear a 'Sucka Free' t-shirt, that's fun. ... And get paid doing it? ... You can't beat that." When he later starts talking about calling in Lil Wayne to cut tracks for ad efforts, it's hard to imagine kids of any stripe not wanting to consider advertising.

Which, again, is the point of the film. "High school," said Ms. Hill, "is the point in which many kids have the serious conversations about their future career plan. Advertising hasn't even been a consideration, so this is what we are trying to change."

Now that it's made, getting out to an audience beyond adland will be the next challenge.

Initial plans for distribution, according to Wunderman, include public and online channels such as the website (which won't be live until Monday), You Tube and blogs. After that, they will make the video available through digital and DVD copies, sending it to art programs, high-school counselors, art teachers and students as well as having more screenings in major U.S. metro areas.

"I had no clue about advertising growing up, didn't think about it much ... didn't think of it as a profession." That's Frank Cooper, chief marketing officer of PepsiCo, speaking in a new recruitment film designed to address one of the many issues contributing to lack of diversity in the advertising and marketing industries. Dubbed "Pursuit of Passion: Diversity in Advertising," the movie is a joint project put out by the 4A's and VCU Brandcenter and will make its debut during Advertising Week. It will be screened for New York City public high school students during a presentation by VCU Brandcenter's Rick Boyko on Sept. 27.