A Year Ago, Early Adopters of Services Like Groupon and LivingSocial Were Young, Male

August 12, 2010 08:04 AM
Turns out the people using mobile coupons today are the same folks clipping them offline: mothers with young kids.

No longer. Today, the demographic embracing mobile coupons is the same one most likely to be clipping them offline: parents with young children. 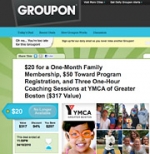 Mobile coupon services like Groupon are now popular with audiences beyond young, affluent males.
A study conducted by Harris Interactive found adults with children at home are more likely to be interested in text alerts about sales and promotions than those with no kids at home. Of people with kids younger than 6 in their household, 35% are at least somewhat interested in getting opt-in text alerts from favorite businesses, compared to 32% of households with older kids and 25% of homes with no children. (The study, conducted in May with 2,000 adults, does not distinguish between childless adults and empty-nesters.)

That's a big shift from last year when the same study found mostly young males were interested in receiving marketing alerts on their phones, which coincided with the demographic most quickly adopting smartphones -- young, affluent males. Mobile marketing firm Placecast funded the Harris studies both years.

The new data also show that parents of youngsters are also more likely to sign up and redeem coupons via e-mail, online or through services such as Groupon. While the difference is less dramatic, it's the same group most likely to clip and redeem coupons from fliers, mailers or newspapers.

In the year between studies, the balance has tilted away from men, as adoption of smartphones such as the iPhone and various Android devices has become more popular. Most receptive to mobile offers are still young adults 18-34, and women's interest has grown year over year.

"Men might do these things first, but women will take it over because they remain the primary shoppers," said Kathryn Koegel, a Primary Impact consultant involved with the study. "Especially when there are children, it all becomes about convenience."

Forrester mobile analyst Julie Ask is less convinced that there's any correlation with having children, just that those interested in mobile coupons are under 40.

"From our data, it doesn't matter if you have kids or not, it's just that they're young," she said of audiences with affinity to mobile coupons. "Parents with young kids are probably also younger."

A 2009 Forrester study on mobile coupons found that 70% of respondents younger than 39 receive coupons or promotions on their phones at least monthly.

NEW YORK (AdAge.com) -- While smartphone users have grown up young, hip and male, one study suggests marketers may be able to snag parents with young children through mobile deals.