The Best Media Writing of the Week

August 20, 2010 11:40 AM
Chris Anderson pronounces the web dead, the web bites back, Foursquare geeks make you sad, but warning labels for bad journalism pick you back up.

Were there a court of memes, a bench where principles of fairness and equity and right and wrong could be meted out to those internet content providers who fill up our days and nights with so... much... stuff, the act of dropping a Chris Anderson-penned piece that proclaims the death of anything, let alone the World Wide Web itself, would raise eyebrows. Doing it in August, when it's so quiet that an Anderson opus faces almost no resistance, would be straight-up criminal. 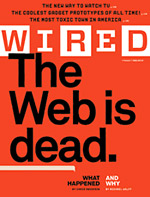 This otherwise slow news week has indeed had the oxygen sucked from it by the Wired editor's "The Web is Dead" piece, which once again displayed Anderson's willingness to make bold statements about big topics. In this case it's the creeping feeling that something is changing in how we consume news and entertainment online as content makers embrace the freemium model that Mr. Anderson -- nice! -- labeled a couple years ago and throw up more walled gardens in the form of pretty iPad apps.

The Internet is the real revolution, as important as electricity; what we do with it is still evolving. As it moved from your desktop to your pocket, the nature of the Net changed. The delirious chaos of the open Web was an adolescent phase subsidized by industrial giants groping their way in a new world. Now they're doing what industrialists do best -- finding choke points. And by the looks of it, we're loving it.

Happily, there remains an entire web full of folks to cast doubt on Mr. Anderson's premises and point out ironies. Two facts that did not go unnoticed or unmentioned were that Anderson does not control Wired's unchoked-off website and that Wired, along with its parent Conde Nast, has made big investments in the apps Anderson sees as driving tiny dagger into the web.

Then there were complaints about the data adduced. BoingBoing, described here as one of Mr. Anderson's daily must-read sites, dug into its fan a bit with an unscientific but appealing-to-the-intuition recasting of the charts provided by Wired to prove out the "Web is Dead" thesis. And Alexis Madrigal,a "Wired" alum who now writes for The Atlantic's website, laid out a cogent, historically-based and nicely-sourced argument that media institutions don't really die off. (The Atlantic has really been beating this drum of late.)

This is the fundamental value of having a historical sense about technology. It leads you away from making grand sweeping statements about how things must go. In July's Technology and Culture, Leo Marx traced the rise of the word 'technology,' as a way of understanding what technology has come to mean in modern society. He pinpoints exactly what makes the Andersonian worldview so compelling -- and so fraught with peril.

If you were glum about the web's reported passing but hopeful about mobile apps' potential, The New York Times' look at those sad souls who are obsessed with Foursquare mayorships offered cold comfort.

It also could make you think that more reportorial rigor was brought to an epic battle between a pair of dorks for the meaningless title "mayor of Stabber Alley" than was devoted to the run-up to the war in Iraq:

For a while, Mr. Lopez lorded over Stabber Alley by simply checking in once a day. Then an acquaintance, Kyle Barry, came out of nowhere and stole his title. What's more, his new rival seemed to be bending the rules by checking in from a remote location. Although Foursquare uses GPS to pinpoint a player's location, most smartphones are still relatively slow and inaccurate, so Foursquare lets users check into places as far as 300 meters (about 328 yards) away.

Just to be sure, Mr. Lopez staked out Stabber Alley to confirm that Mr. Barry was not actually there even though he checked in. Once, he said, he saw Mr. Barry checking in while walking across the street. Under the loosely defined etiquette rules of Foursquare, a "drive-by" check-in is not allowed.

Mr. Barry admitted to The Times that he had checked in from his office a block away; Mr. Lopez went on to program a script that automatically checked him into Stabber Alley every day.

I see a lot of tossed-off or just plain stupid social-media advice in a given week and it's rare that a how-to on the topic of how to use Facebook shines. Veteran consultant John Boitnott, however, wrote a standout piece with his look at how The New York Times breaks the rules of Facebook page etiquette with its RSS-y firehose approach. His point is that yes, this actually can work for The Times, but NO, THIS IS NOT OK for smaller publishers, whom he smartly urges to get away from the rote flinging of links at fans.

...The rest of us can't replicate the Times, and we do at our peril. We have to learn from what the Times CAN do. Smaller publications, which work their butts off to maintain their Facebook community, had better avoid an overbearing, impersonal approach. It could mean a loss of connection to the fans who enjoy personality and perhaps even fun with their information. 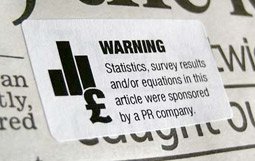 You probably thought that the journalism profession's many ills couldn't be reduced to a sheet of stickers. You would be wrong. Comedian Tom Scott had made a series of Journalism Warning Labels that he's been affixing to London's free newspapers. (Happily, Mr. Scott has provided templates you can print yourself in either the U.K. or the U.S.)

Here are a few examples:

WARNING Statistics, survey results and/or equations in this article were sponsored by a PR company.

WARNING To ensure future interviews with subject, important questions were not asked.

WARNING This article is basically just a press release, copied and pasted.

A smart, simple way to put the figurative scarlet letter on bad journalism, though one wonders whether he is readying a sticker for all those premature, death-of-something articles we see so many of.

Were there a court of memes, a bench where principles of fairness and equity and right and wrong could be meted out to those internet content providers who fill up our days and nights with so... much... stuff, the act of dropping a Chris Anderson-penned piece that proclaims the death of anything, let alone the World Wide Web itself, would raise eyebrows. Doing it in August, when it's so quiet that an Anderson opus faces almost no resistance, would be straight-up criminal.