November 09, 2009 12:00 AM
After five months of near silence on the marketing front, Chrysler Group is roaring back with a new attitude.

DETROIT (AdAge.com) -- After five months of near silence on the marketing front, Chrysler Group is roaring back with a new attitude.

The automaker is ratcheting up advertising this quarter and plans to do so in each of the next two years, Chief Financial Officer Richard Palmer told attendees at an unveiling of its five-year plan last week. It will spend $100 this year for each new vehicle sold in the U.S. at retail (excluding fleet), rising to $170 per vehicle next year and $210 in 2011. By the calculations of Joe Phillippi, president of Auto Trends Consulting, that would put Chrysler's spending at $1.4 billion next year, based on the automaker's sales forecast.

JEEP SHIFTS GEARS: New advertising for the brand aims to appeal to dreamers who are 'time-constrained by family and work.'
Chrysler Group vehicle sales fell 28% last month to 65,803 units vs. last October, and CEO Sergio Marchionne said, "I can give you one reason: the fact that we've been incredibly quiet for the last five months so the marketing positions of all our brands have been incredibly weak." He cautioned attendees not to be pessimistic, citing his success at turning around Fiat. "We would not reinvest $23 billion if your expectation is not to re-establish these brands."

But while the dollars might be up, some observers believe they might be spent too much on traditional mass media and that there's a disconnect in the marketing messages for Jeep, Ram and Dodge that the public will find hard to reconcile.

Chrysler's plan is big -- literally. Three experts who attended the meeting were given a loose-leaf binder 2 inches thick outlining it.

Emphasis on fun
To start with, Chrysler hopes to reposition Dodge cars from rugged to refined and youthful, said Ralph Giles, president-CEO of the brand. He called it "a complete overhaul of our branding and positioning" by the second quarter of 2010. Within that framework, the automaker is also changing its targeting, going after consumer lifestyles rather than age groups or price classes, because, he said, "people are aging gracefully" and "fun is ageless."

Mr. Giles said several ad ideas are under consideration, and he showed a video themed "The Physics of Fun" said to have been created by Chrysler's multicultural shop GlobalHue, Southfield, Mich. The shop referred calls to the client.

The repositioning for Dodge is a stretch, said John Wolkonowicz, industry analyst at IHS Global Insight, noting that "Dodge was never about refined and you can't just suddenly be refined." As a self-described believer in generational dynamics, Mr. Wolkonowicz is not a fan of Dodge cars chasing a mind-set instead of certain age groups.

Jeep, too, is shifting gears, veering away from its established workhorse roots. President-CEO Mike Manley said the brand will be less focused on "sheer capabilities" and more on fuel economy and on-road driving manners. Jeep research found that only 30% of consumers are interested in true off-roading, so the brand aims to appeal to both its traditional "adventurers" and "dreamers, a larger group of people who are time-constrained by family and work, who want authentic gear with the hope that one day they'll be able to do more and dream less." He said the Wrangler will remain "the ultimate expression of the brand" and come with standard 4x4, off-road ability, but the nameplate will get more derivatives and models, some with two-wheel drive.

It's not exactly a new strategy. Germany's Daimler, an ex-parent of Chrysler Group, tried expanding Jeep earlier in the decade with city-street-friendly models like the Compass and Patriot, said Peter DeLorenzo, founder of AutoExtremist.com. Neither model did very well. Mr. Phillippi said Chrysler can expand Jeep into non-off-roaders but the automaker has to be careful "not to sissify" the rugged brand. Styling will be crucial for the new Jeeps, he said. "They got to look like a Jeep."

Chrysler's multicultural shop, GlobalHue, Southfield, Mich., handled Jeep's general campaign with the theme "I live. I ride. I am. Jeep."

Machismo
Richards Group, Dallas, was tapped for the new Ram work after a pitch that included incumbent BBDO Detroit, and it created a spot with an audacious media buy -- 190 times in prime time on its first night alone. The first spot, titled "Manifesto," was narrated by agency founder Stan Richards. The theme is "I am Ram," and it uses a montage of photos as the narrator says things such as "I am fueled by optimism and a can-do spirit," and "I will not yield. I will not coast to a stop. My name is Ram."

Mr. DeLorenzo called it "heavy, old-school macho," and many commenting on the spot at AdAge.com were critical. "It looks like an animatic," commented Producer449, New York. "And secondly, it has more cliches than I've ever heard in 60 seconds. Or maybe it was 30 seconds but just felt like 60 seconds."

"What a waste of marketing dollars. Sending the same message to the same sets of eyeballs over and over and over again, using expensive media placement," said TheD, Troy, Mich. 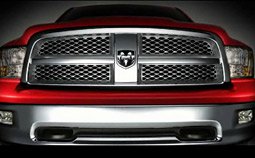 'I AM RAM': New spot shows a montage of photos while narrator says things such as 'I am fueled by optimism and a can-do spirit.'
Massachusetts dealer Tom Barenboim, said, "I didn't get the message or the value of the proposition," but said he's staying openminded because he was told he had to see all three phases of the blitz.

Mr. Manley said the goal of the first phase is to generate awareness for the brand's new philosophy. The narrator in the TV spot for the second phase, which breaks later this month, talks about not living through other people. The campaign's final phase "is a real call to action that will create a pathway to sales that is very different from traditional methods," he said.

The Chrysler vehicle-brand presentation by President-CEO Olivier Francois, tapped months ago to oversee all the carmaker's marketing, advertising and brand development, was the strongest made by any of Mr. Marchionne's 15 lieutenants, said Mr. Wolkonowicz.

Mr. Francois, who keeps his job as the head of Fiat's upmarket Lancia brand, showed an emotional brand vision video for the Chrysler 300 that could easily be transformed into an ad. "Whatever happened to American style?" the video's narrator says. "When going for a drive was a big deal. We turned heads. ... At Chrysler we believe it's time to get it back."

DETROIT (AdAge.com) -- After five months of near silence on the marketing front, Chrysler Group is roaring back with a new attitude.