Burger King's anti-Happy Meals are pissing some people off, but BK is used to that

Global CMO Fernando Machado says all the talk is supporting one of the campaign's main goals: awareness around mental health

Burger King created 'Real Meals' to address people's real emotions, but some people have a problem with them. 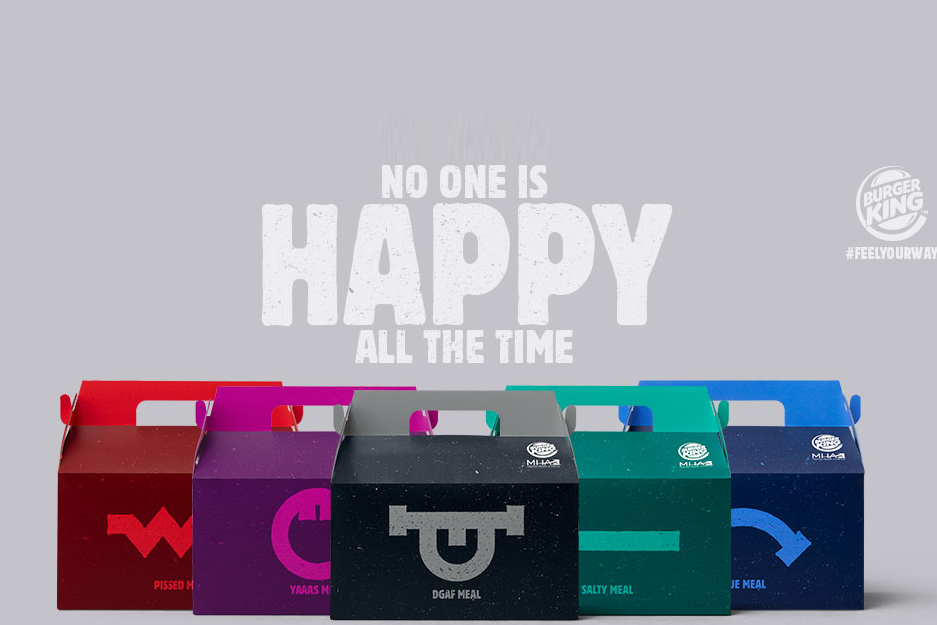 Earlier this week, Burger King introduced a new offering, a set of “Real Meals” acknowledging that people aren’t happy all the time.

Including selections like the Pissed Meal, the Blue Meal and the DGAF Meal, they’re a playful dig at its competitor McDonald's Happy Meals. But, with the tagline "Feel Your Way," they're also meant to raise awareness for Mental Health Awareness Month in May—the brand partnered with Mental Health America on the idea, which was conceived out of Mullen Lowe U.S.

We teamed up with @BurgerKing to bring #mentalhealth awareness to the table. Feelings aren't facts, but they're real and so are you. It's ok to not be ok, so #FeelYourWay this #MentalHealthMonth. pic.twitter.com/99FTQcqCIB

However, like other socially-conscious BK ideas before it, this one's managed to (like the name on one of the meal’s boxes) piss a whole lot of people off.

Just a sampling of those reactions:

BK Employee: "Hey boss, I need an extra day off to go see my therapist."

BK Manager: "Either you work the hours you're scheduled or you're fired."#truestory #feelyourway

Burger King, I eat your food when i’m depressed and it makes me feel 1000% worse. You bring me closer to the brink every time I eat a whopper #feelyourway

Like, when would you ever tell someone suffering from depression to #feelyourway? You wouldn't tell them "yeah feel depressed!"

Not sure who thought this was a good idea.

Burger King Global CMO Fernando Machado says the main point of the campaign wasn’t to sell burgers. “We are not really making money with this campaign,” he says. It’s about “raising awareness to the fact that it’s ok to express your emotions and that you don’t need to be happy all the time.”

As part of the effort, Machado says Burger King is also making a donation to Mental Health America, but that’s “just a plus,” as awareness was the key goal of the partnership.

“Just the fact that people are talking so much about the campaign demonstrates that we are accomplishing part of our objectives,” he says.

Despite the negative responses, reactions from the brand’s fans have been “overwhelmingly positive,”  he says. “Every time you do something that stands out, you will be criticized by some. Fortunately, because of our history as a brand, people tend to understand our positive intentions.”

The idea also has inspired others, like Bernstein-Rein, the agency that helped to conceive McDonald's Happy Meal, to step up for the cause (while bringing a bit of attention to the Golden Arches too).

@BurgerKing’s “#RealMeals” are bringing attention to #MentalHealthAwarenessMonth. As the agency that created the Happy Meal, to keep optimism visible every single day, we’d like to join in and donate $1,000 to the #YouBeYou Program (@JFSKC ) in support of mental health. 😄🍔🤝 pic.twitter.com/IspdUKKj89

BK has long aligned itself with social causes, with the award-winning efforts like the “McWhopper" campaign that brought multiple brands together in a single product for Peace Day, the “Proud Whopper” in support of LGBTQ rights (which saw backlash of its own), a film that raised awareness around net neutrality, the “WhopHer” marking the legalization of female driving in Saudi Arabia and a film in which BK servers punched Whopper Jrs. to teach a lesson about bullying, among others.

Machado says the company does track the effectiveness of its socially-conscious pushes and continues to support causes it has backed. For example, the Proud Whopper idea has led to Burger King’s continued support of Pride parades around the world each year, and the company has seen its Corporate Equality Index rating (which measures a company’s treatment of LGBT employees, consumers and investors) rise from 55 in 2014 to 100 in 2019.

Some might say that this time, with a topic such as mental health, BK may have gone too far.

“As long as the cause and idea can link back to our brand positioning and as long as it feels authentic and is not offensive to people, we are fine with it,” Machado says.

“Believe me when I say that we are very proud of taking a stand with some of these campaigns,” he adds. Such ideas “motivate everyone here in the building to come to work since they know we are actually doing more than just selling burgers.”