A vintage ad invites the question: When was the last time that you trusted an airline?

The Good Life looks at the good old days when airlines strove for service. 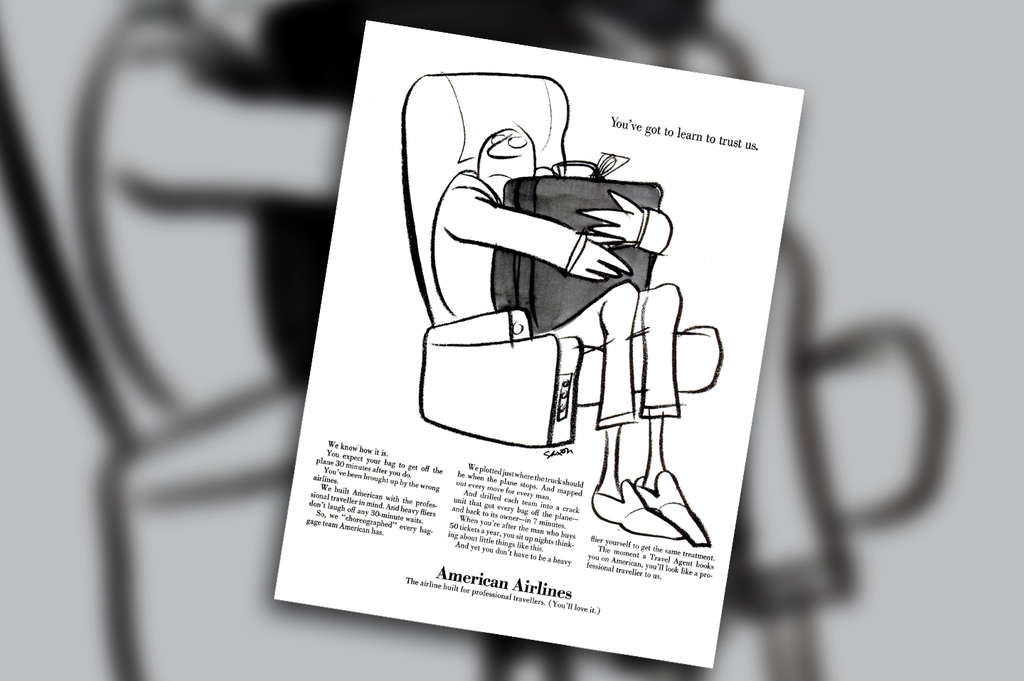 While you’re planning for Cannes next month you may want to ponder that, along with this 1967 American Airlines ad aimed at business travelers. It must have seemed refreshing in the day to admit that flyers had trust issues with carriers—and to illustrate that so boldly with this cartoonish man clinging suspiciously to his suitcase.
It seems he has a fear of checking. How quaint.

Read on and you find out he’s not leery that his bag will end up in Australia and he in Atlanta, nor that someone’s Great Aunt Tilly has hogged the overhead with knitting, forcing him to fork over $30 to check his grey flannel suit-bag. Nope, he’s scared that he won’t be able to retrieve it at the baggage carousel within 30 minutes.
But American has something special in the air. It guarantees his bag won’t just be returned to him—it will be reunited with him in seven minutes. Yes, you read that right. Less time than it would take you to cross the American concourse at O’Hare.

According to the Ad Age Encyclopedia, American had a history of honesty in ads. In 1937 it ran an ad featuring then-CEO C.R. Smith with the headline, “Why dodge this question: Afraid to fly?” As for its business-flyer cred, American created the Admirals Club in 1936 and the first frequent flyer program in 1981. Then in 1992, it pioneered the first value plan for discount fares, starting the race to no-you-can’t-choose-your-seat bottom.

The clinging-suitcase guy was a big, er, departure for the airline, which a year later, in 1968, showed a woman flight attendant with the tagline, “Think of her as your mother. She only wants what’s best for you.” Or the 1965 ad showing women flight attendants seeing people off the plane with the tagline, “The Natives are friendly.” (The capitalization is American’s.) There was also an ad that inexplicably showed an Adirondack chair on a dock to highlight American’s in-flight amenities.

American broke new ground in 1991 when it sought government approval to base ads on maintenance and safety issues. “We think it’s time to put aside the notion it’s OK for airlines to compete on the thickness of their ham sandwiches and the breadth of their wine selections, but that it’s not nice to talk about the quality of aircraft maintenance,” American’s then-Chairman Robert Crandall told the Association of National Advertisers in 1991.

Ah, free food and wine. Remember that? Neither do we.