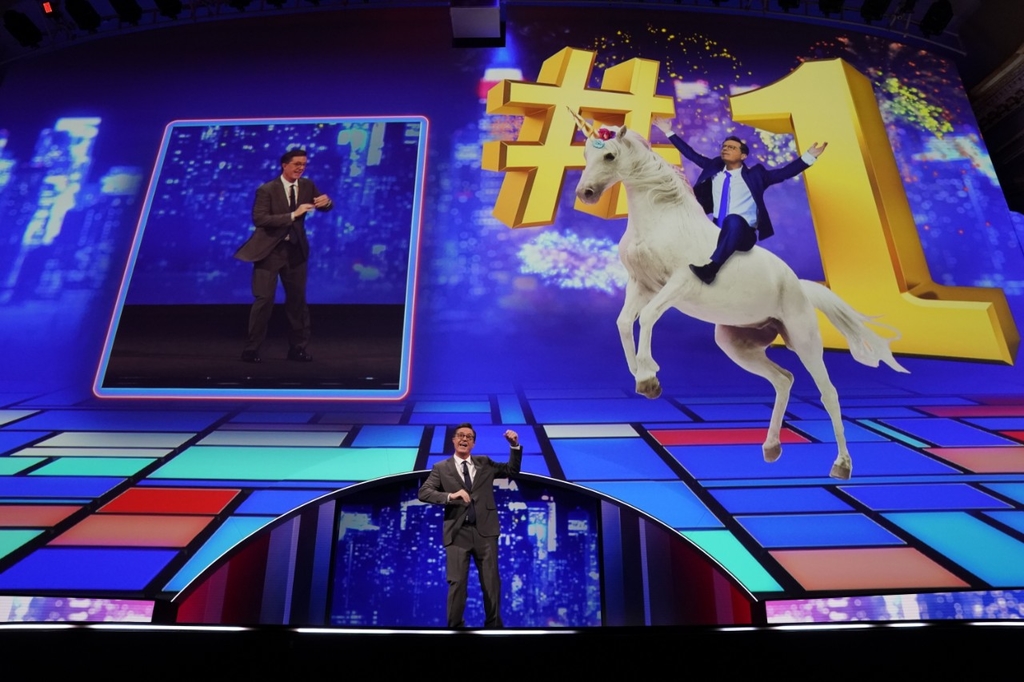 It’s the fourth day of the TV upfronts, with TV networks pitching their shows to advertisers; everyone’s probably a bit bleary-eyed this morning, so let’s start with a joke.

At CBS’s event, Stephen Colbert said the reason the network has been No. 1 for 11 seasons is because “there are a lot of old people who don’t realize the TV in the basement has been on for a decade.” (Related factoid: The median viewer age for CBS’s long-running “NCIS” is 66.2 years, according to Nielsen.)

Joking aside, CBS execs spent the presentation trying to reassure advertisers that the departure of disgraced former CEO Les Moonves hasn't affected the company’s stability, Ad Age’s Jeanine Poggi reports. And it offered up a tribute to hit “The Big Bang Theory,” which will air its final episode tonight after 12 seasons.

More upfronts news: At the WarnerMedia upfront, the AT&T-owned company announced that its comedy-oriented channel, TBS, will diversify its lineup with some dramas next year, Poggi writes. Get more news and details from Poggi’s pop-up newsletter for the upfronts, including a few jokes from Conan O’Brien’s appearance at the WarnerMedia event. His take on the upfronts: “It’s the Oscars for people who love PowerPoints.”

Meanwhile in Washington
The Trump White House has an unusual new campaign asking people to report their grievances if they suspect social media platforms censored them because of political bias. The website reads:

“SOCIAL MEDIA PLATFORMS should advance FREEDOM OF SPEECH. Yet too many Americans have seen their accounts suspended, banned, or fraudulently reported for unclear ‘violations’ of user policies. No matter your views, if you suspect political bias caused such an action to be taken against you, share your story with President Trump.”

Reminder: The website says the effort is non-partisan, but Trump often alleges that social platforms are biased against conservatives. This month, after Facebook banned extremist figures including Alex Jones, Milo Yiannopoulos and Louis Farrakhan, Trump tweeted that he was paying attention to social media censorship. “We are monitoring and watching, closely!!”

Pissing match
Vita Coco, the coconut water brand, has a campaign out claiming its new product is “Impossible to Hate.” In response, someone tweeted at Vita Coco, “I would rather drink your social media persons piss than coconut water.”

The brand says the exchange wasn’t planned and that the hater wasn’t paid. Someone created an official Twitter fan page “for the Vita Coco employee who peed in a jar and blew up on twitter. #BossBitch.” So is this brilliant or beyond gross?

Just briefly:
Peace: A court ruled that that Dentsu Aegis Group, the former financier for Woodstock 50, didn’t have the right to cancel the festival. And so the show might happen after all. Maybe? Read more by Ad Age’s Lindsay Rittenhouse.

‘Neverland’: Jon Forsyth, the former Adam&Eve/DDB founding partner, founded a new agency called “Neverland.” As Ad Age’s Alexandra Jardine writes, the name was inspired by the magical land in “Peter Pan,” though Forsyth says the new Michael Jackson documentary, ‘Finding Neverland,’ has been an issue.  ‘We thought of the name well before, and when the Jackson documentary came out, it was annoying,’ he says.

Sold: Condé Nast magazine Brides “has been purchased by Dotdash, a digital media company that operates as a subsidiary of IAC,” WWD reports. The magazine will go digital-only in the fall.

Brand idea of the day: In Brazil, Coca-Cola got creative with its cans to promote “Avengers: Endgame.” It turned the tabs into collectible pins of the movie’s characters, so people can wear them on their clothes or backpack. The campaign is from WMcCann. Read more by Ad Age’s Ann-Christine Diaz, and check it out here.

Also, the latest development on Woodstock 50