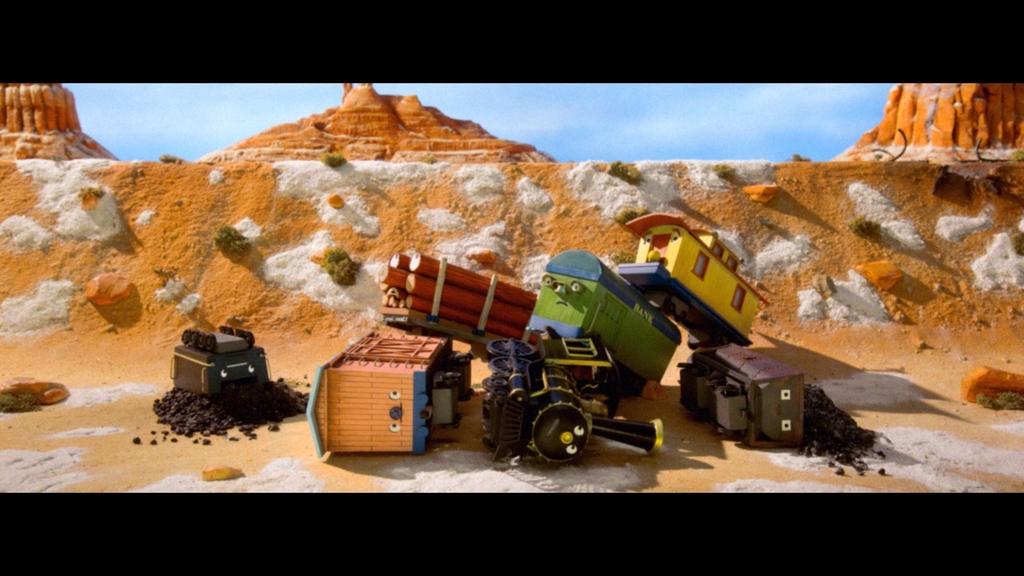 AT&T has turned the dial up on its genre-mixing cinema campaign promoting its “More for Your Thing” platform: It spliced together a Spaghetti Western and a whimsical children’s animation.

The 90-second ad from BBDO, directed by Furlined’s Dougal Wilson, is perhaps the most extreme mashup of the series to date. The campaign, which aims to cement AT&T’s status as an entertainment player, debuted last summer with cinematic spots that unexpectedly morphed from one genre to another—a rom-com became a horror film while an actioner switched to a musical. It went on to feature a feel-good sports film that transformed into a sci-fi thriller.

The new ad will begin airing on May 24, ahead of big summer movies like “Aladdin." It starts off in a classic Western scenario, as a a gang of grizzled bandits blow up a steam train running through Arizona’s Monument Valley. But after the train derails and the smoke clears, we switch to the animated footage, featuring cute railroad cars signing a jaunty melody about how they “gotta get back on the track” as the bandits look on in astonishment, bewildered by their own physical transformation into cartoon figures.

For the latest spot, BBDO hired British director Dougal Wilson, known for his Christmas ads for John Lewis (including "The Long Wait" and "Monty the Penguin”) and more recently, Apple spots, like “Barbers” and "Unlock."

“We wanted someone who could deliver genuine warmth and surprise—the kind you get from the best kids’ films,” says Matt MacDonald, Group Executive Creative Director, BBDO New York.

Wilson says the storyline appealed to him as a fan of both Westerns and animation. “I grew up watching a lot of John Ford films and Sergio Leone movies, like ‘Once Upon a Time in the West,’” he says.

On his turn in the AT&T series, Wilson says he wanted to add an element of the self-referential. This is the first time in the campaign that the characters appear cognizant of the changeover. “I wanted to get that feeling into it of the characters being surprised and bewildered when it switched into a comedic genre.”

Western scenes were shot in the northern Nevada Northern Railway, a railroad museum. A heavy blizzard just before filming began threatened the production. Wilson, who’s used to having to create fake snow for his Christmas ad shoots, says it’s the first job he’s worked on where snow actually had to be painted out (by VFX house Method). The butte peaks from Monument Valley were also added in later (in case you were wondering, there’s no railroad in Monument Valley).

As well as classics like “Thomas the Tank Engine” and “The Little Engine That Could,” Wilson was inspired by the films of stop-motion pioneer Rankin Bass and aimed for a  “charming, naïve” quality to the train characters. The voice cast includes “Futurama” actor Jon Di Maggio, who played Bender in the series.

The music was another crucial detail. Wilson himself wrote the spot’s opening tune as well as the song the engines sing as they’re climbing back on the track. “I just put it together on GarageBand at my mother’s house over Christmas,” he says.