The company plans to test the device with household goods, like toothpaste

The company plans to test the device with household goods, like toothpaste. 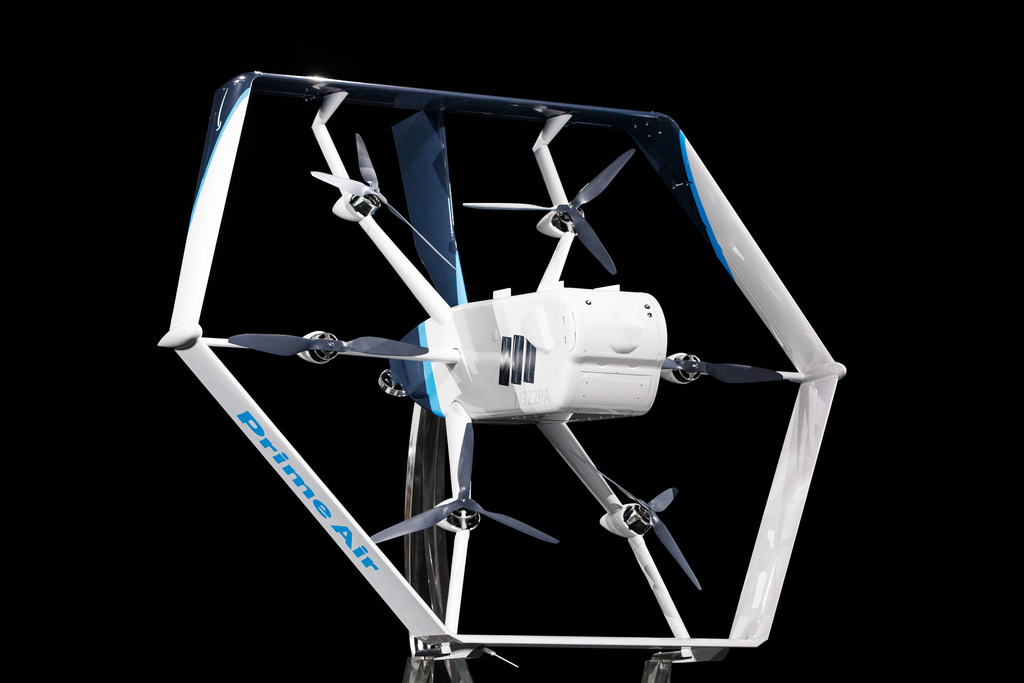 Amazon.com Inc. has unveiled a revolutionary new drone -- part helicopter and part science-fiction aircraft -- that the company expects to use for test deliveries of toothpaste and other household goods starting within months.

The new device takes off vertically, then tilts to fly horizontally like a plane. It also features artificial intelligence, using a suite of sensors the company said will allow it to fly robotically without threatening traditional aircraft or people on the ground.

“We have a design that is amazing,” Gur Kimchi, vice president of Amazon Prime Air, said in an interview in which he declined to say where the device would be tested. “It has performance that we think is just incredible. We think the autonomy system makes the aircraft independently safe.”

After more than a year of relative quiet by Amazon Prime Air in the race to bring drone deliveries to market, the company’s announcement on Wednesday is a sign that it has been aggressively working with regulators to craft a system that can operate under existing aviation rules and those being drafted for the future.

The Amazon announcement was full of drama as Jeff Wilke, chief of the company’s global consumer business, revealed the device at a technology conference in Las Vegas to booming music and theatrical smoke.

“The tech industry is abuzz about drones, but not all drones are created equal,” Wilke said.

Amazon declined to release some specifics on the device, citing trade secrets. And it also didn’t provide information about where it intends to conduct delivery tests, which have been in the U.K. in the past.

It can take years for traditional aircraft manufacturers to get U.S. Federal Aviation Administration approval for new designs and the agency is still developing regulations to allow drone flights over populated areas and to address national security concerns. The new drone presents even more challenges for regulators because there aren’t standards yet for its robotic features.

Shortly after the announcement, the FAA issued a statement saying it was granting a one-year approval to test the devices in limited ways that still won't allow deliveries. The so-called special airworthiness certificate allows Amazon to continue its developmental program.

All that makes it unlikely Amazon’s new delivery drones will be clogging the skies over the U.S. in routine flights anytime soon.

The technology Amazon is using for its drone is improving rapidly, but many complications remain before such devices are approved for routine operations, said John Hansman, an aeronautics professor at the Massachusetts Institute of Technology who has studied robotic flight.

“It’s a bold statement to say that you’ve thought of everything in terms of your safety analysis,’’ Hansman said. “I don’t want to say they can’t do it. I would say I have a lot of questions about all the conditions and have they thought of all of them and can they handle them.’’

Still, Amazon’s confidence in the drone shows this new segment of the aviation industry is rapidly maturing and working closer than ever with regulators.

One of its competitors, Alphabet Inc.’s Wing, in April became the first drone company to win FAA approval to operate as a small airline and is planning its own delivery tests. United Parcel Service Inc. and drone startup Matternet Inc. began using drones to move medical samples between hospitals in Raleigh, North Carolina, in March.

Amazon is competing against Wing, UPS and many smaller companies to create devices capable of delivering emergency supplies and consumer goods within minutes. It was one of the only drone companies that wasn’t chosen last year by the U.S. Department of Transportation for government-sponsored delivery testing, but has been operating at an FAA-sponsored test site.

The company’s new drone, which doesn’t have a name yet, is the best result of more than 50,000 iterations tested on computers. It’s about six feet across and looks like some traditional multicopters with six propellers that lift it vertically off the ground. But the way it flies is unique.

It is surrounded by a six-sided shroud that will protect people from the propellers, but that also serves as a high-efficiency wing so that it can fly horizontally more like a plane. After it gets off the ground, the craft tilts and flies sideways -- the helicopter blades becoming more like airplane propellers.

Other delivery drones can fly horizontally like a plane as well. But they do so with a separate set of propellers to drive it forward. Amazon’s is the only model that tilts its body to fly like a plane.

The Amazon device has only 10 moving parts, its six propellers and the four control surfaces that allow it to maneuver in flight, according to Kimchi, who heads the engineering team that developed the aircraft.

Packages are carried in a square-shaped pod or fuselage in the middle of the drone. It’s designed to come within a foot or two of the ground and drop the package in a marked spot.

All the components are already certified for use on other aircraft or were designed and built from scratch to meet FAA regulations, he said.

“This aircraft was designed with compliance in mind,” he said in an interview. “We’re not telling the FAA, hey, here is something new that you’ve never seen before. We’re saying, this is an airplane that’s built to exacting aerospace standards.”

Amazon’s business model for the device is to make deliveries within 7.5 miles (12 kilometers) from a company warehouse and to reach customers within 30 minutes. It can carry packages weighing as much as five pounds. More than 80 percent of packages sold by the retail behemoth are within that weight limit, Kimchi said.

Its propellers have a slight S-curve designed to lower their noise to make them more acceptable for use in populated neighborhoods, Kimchi said. The craft is far more stable in high winds than more traditional drones, he said.

It’s also designed to be safe around people, he said. The propellers can be easily stopped to limit the potential for injury, for example. One of the critical hurdles all drone operators will face is proving to FAA that devices won’t pose a hazard to people on the ground.

During an interview, Kimchi showed examples of the multiple layers of protection the drone has to ensure it won’t lower itself into a backyard drop zone if a person unexpectedly walks into the way. One camera uses infrared, which recognize a heat signature, while other cameras use traditional light. To add extra redundancy, the drone’s computers use multiple computerized methods to recognize hazards.

By layering different sensors and methods, it reduces the chances that one will fail, he said.

One of the things the drone has mastered, according to the company, is detecting utility wires and clotheslines. They have been notoriously difficult to identify reliably and pose a hazard for a device attempting to make deliveries in urban and suburban areas.

The announcement was made at Amazon’s re:MARS Conference, which was started by company Chairman Jeffrey Bezos to explore the outer bounds of technology. The name stands for “Machine Learning, Automation, Robotics and Space.”