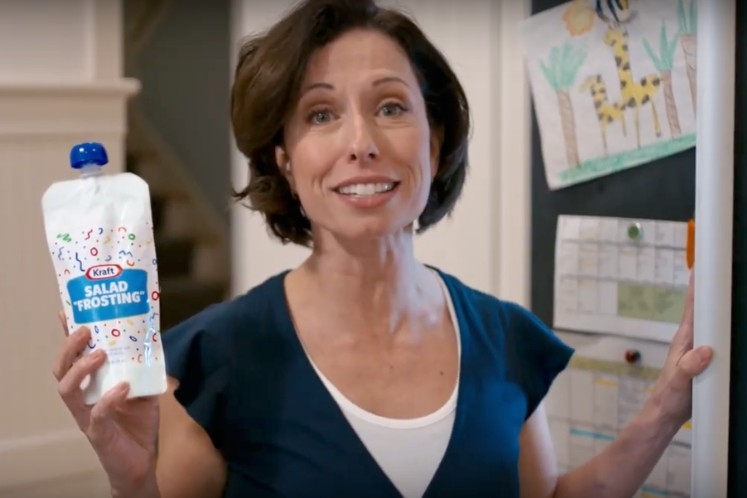 What people are talking about today
How do you get kids to eat salad? Kraft’s idea: Rebrand dressing as “frosting” for salad. Because “sometimes parenting means bending the truth,” Kraft says. As reported in the Ad Age Marketer’s Brief, Kraft is having a contest to choose the best lies that parents tell their kids. The brand will choose 1,500 winners who will get samples of ranch dressing packaged as kid-friendly Kraft Salad Frosting.

The campaign from Leo Burnett is generating attention—partly because some people don’t think it’s a good idea to lie to kids. Check out the Twitter hashtag #lielikeaparent to read parents' tricks. Some are funny but a little twisted: “The best lie I told my kids is when the ice cream truck plays music, it means he's out of ice cream.”

‘Putting it all on the line’
Nike often makes ads congratulating its sports stars after wins. Yesterday it celebrated an athlete after a huge disappointment. The Golden State Warriors’ Kevin Durant just had surgery on a ruptured Achilles tendon, an injury he suffered during Game 5 of the N.B.A. finals against the Toronto Raptors. He had come back for that high-stakes game after a calf injury sidelined him for over a month. “Basketball is my biggest love and I wanted to be out there that night because that’s what I do,” Durant wrote on Instagram, under a photo of himself in his hospital bed. Post-surgery, he’s expected to be off the court for months.

Nike Basketball social media accounts reacted within a few hours of news breaking about the surgery. The brand posted an image of Durant on the court, with the caption: “Crazy is putting it all on the line for the game you love. Just do it.”

Mental health on the job
Are ad agencies helping employees with mental health issues? Not as much as they could. “David & Goliath recently introduced an additional day of paid time off earmarked for mental health,” Ad Age’s I-Hsien Sherwood writes. “But most companies lack codified policies or support systems, and progress is coming only slowly.” Read Sherwood’s full article, which includes the story of a digital agency founder whose own struggles led him to fight for the cause.

Just briefly:
40 Under 40: As you’re gearing up for the Cannes Lions, don't forget to nominate young trailblazers at your company for Ad Age’s 40 Under 40 list. Submissions are now open.

Problematic?: Facebook “uncovered emails that appear to connect Chief Executive Mark Zuckerberg to potentially problematic privacy practices at the company,” The Wall Street Journal writes. The report prompted pushback from Facebook, which said neither Zuckerberg nor any other employee had knowingly violated Federal Trade Commission rules.

Chainsaws: Police reportedly used "chainsaws to tear down installations protesting the treatment of immigrant families at the U.S.-Mexico border,” Ad Age’s Lindsay Rittenhouse reports. The installations were the work of a non-profit, Raices, and agency Badger & Winters.

Podcast of the day: Avi Dan, CEO of Avidan Strategies, talks about risk, creativity and being shot at as a 19-year-old Israeli tank commander. Listen to his conversation with Ad Age Editor Brian Braiker here, on the “Ad Lib” podcast.

Quote of the day: “Of all of our wins, this is the only one that has impressed my teenage daughter,” Terri & Sandy Co-CEO Sandy Greenberg says. The agency was just named U.S. creative agency of record for the Nutella brand. Read more by Lindsay Rittenhouse in Ad Age.

Ad of the day: An entertaining new U.K. spot from Virgin Trains and Anomaly London “imagines train travel being invented all over again,” as Ad Age’s Alexandra Jardine writes. A random guy who needs to get to Wigan imagines a contraption that can take him there, complete with wheels, a drinks cart and a toilet. Watch it here; it looks like this was a lot of fun to make.