Chopped-and-screwed highlights are at the core of the NBA's latest foray into legalized wagering. 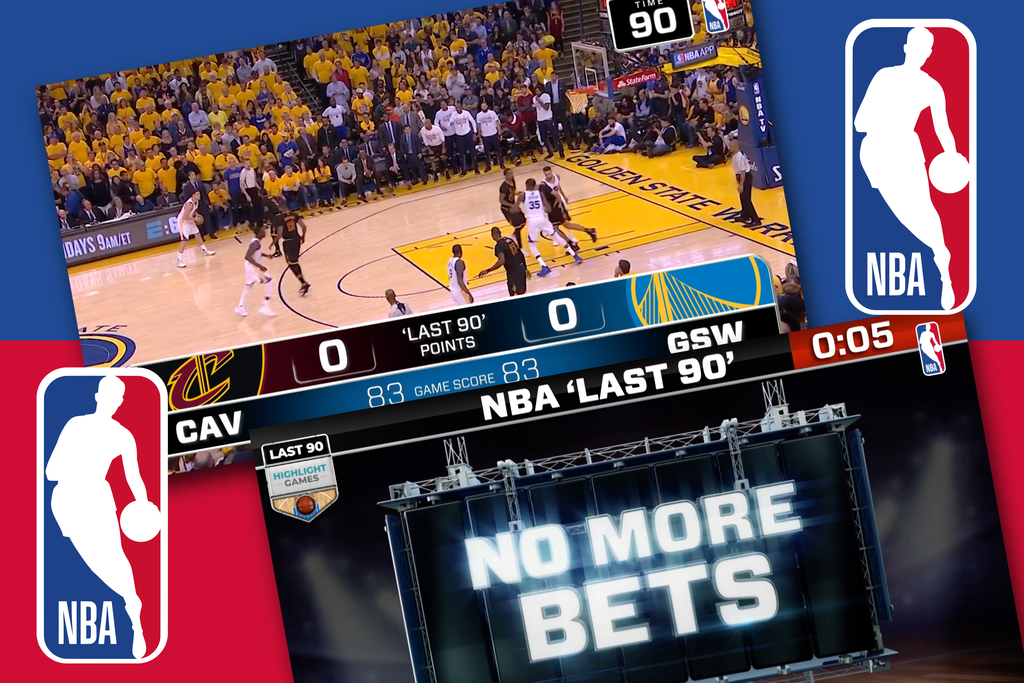 Just days after the completion of the 1,312th and final game of the 2018-19 NBA season, the league has embarked upon a new partnership that will reward fans with even more on-court action. That the upcoming slate of games will be generated by software shouldn’t be a deterrent to the sports bettors who will be encouraged to place a wager or two on the virtual contests.

The league and its players’ union on Wednesday announced plans to develop NBA Last 90, a platform that will stitch together official highlights and footage in order to create a series of simulated fourth-quarter battles. (As the name suggests, the clips will be edited in such a way as to generate a seemingly authentic final 90 seconds of game play.) Gamblers looking for a roundball fix will then have an opportunity to bet on the outcome of each Frankensteined NBA experience.

The virtual sports-gambling service will launch in Europe before arriving in select U.S. markets at some point during the upcoming NBA season. The NBA Last 90 project is a collaboration between the league and U.K. developer Highlight Games.

“Virtual sports betting is incredibly popular in regions around the world and we’re looking forward to giving fans another innovative way to engage with the NBA,” Scott Kaufman-Ross, who heads up fantasy and gaming for the league, said in a statement.

A demo on the Highlight Games site offers a simulation of what users may expect from the NBA Last 90 service. With 90 seconds to go in regulation, the visiting Cleveland Cavaliers are all knotted up with Golden State, 83-83. Bettors can wager on as many as four outcomes, including a money line bet on which team will win outright and an over/under prop on how many three-pointers will be drained during the final minute-and-a-half.

Once the bets are placed (a countdown clock lets users know how much time they have to pony up), the “game” begins. In the Highlight Games simulation, a healthy Kevin Durant sinks a three from the top of the key, while Cleveland’s Kyrie Irving answers with a deuce. Steph Curry dribbles around LeBron James for a layup—at first blush, the anachronistic rosters are a little jarring—and so on and so on.

The cuts are seamless, but fans with the right set of eyes and an elephant’s memory for footwear will surmise that plays from at least four or five Cavs-Warriors games (one of which, without a doubt, was Game 1 of the 2017 NBA Finals) were used to populate the virtual showdown.

Back to the “game.” The Cavs’ J.R. Smith hits a three at the buzzer, giving Cleveland a 92-90 victory. If you picked the Cavs and the over on the three-pointer prop, you’re the big winner! If you went the other way, perhaps betting real money on fake games isn’t for you.

That the NBA will be the first major U.S. sports league to try its hand at virtual sports wagering should come as no surprise to those who’ve kept an eye on Commissioner Adam Silver. An outspoken advocate for dragging gambling from out of the shadows, Silver was instrumental in locking in the July 2018 gaming partnership with MGM Resorts International. The MGM pact was signed shortly after the U.S. Supreme Court struck down the federal law prohibiting gambling on sporting events.

At a 2017 huddle with the heads of the NFL, NHL and Major League Baseball, Silver predicted that gambling would be legitimized, and it was up to the leagues to ensure that they profited from that inevitable development while taking steps to ensure that no funny business would be tolerated. “It’s a multi-hundred-billion-dollar illegal industry … and I think ultimately, as the owners of our intellectual property, we’re going to embrace it and also make sure that our integrity is protected at the same time,” Silver said.

Silver first planted his flag back in 2014, when he wrote an editorial in The New York Times in which he encouraged the government to allow states to offer a highly regulated form of legitimate wagering. Since the Supreme Court’s decision, eight states have legalized sports betting in some capacity and several others have various bills awaiting legislatorial action.