If you want to see what’s driving ad spending, just look for the net gains: The biggest internet companies are propelling the ad market as they double down on their own marketing. A quick take on Ad Age Leading National Advertisers 2019. 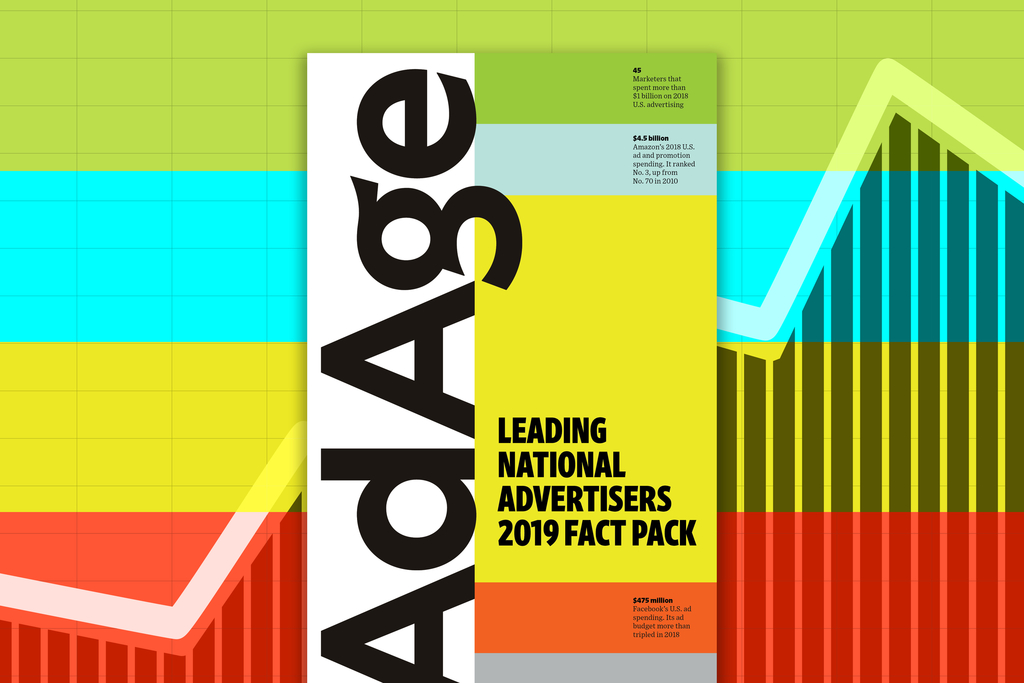 If you want to see what’s driving ad spending, just look at the gains: The biggest U.S. internet companies—including the likes of Amazon, Facebook and Uber—are powering the ad market as they double down on their own marketing.

That’s the key takeaway from the 64th annual Ad Age Leading National Advertisers 2019 report, which tracks trends in national ad spend. Here are 10 quick takeaways from Ad Age Datacenter’s analysis of the nation’s true blue-chip advertisers, who don't always look like last year's (listen to the "Ad Lib" podcast above for all that and more):

The top 200 U.S. advertisers increased ad and marketing services spending 3.6 percent in 2018 to $163 billion
But the devil's in the details. A roster of 19 internet-centric companies, from Amazon to Uber, drove that spending. Factor out the internet companies and spending for the remaining 181 marketers rose a meager 1.7 percent. Spending for the 19 internet companies jumped a whopping 23 percent.

Some internet companies are hugely reliant on advertising to drive business
LendingTree last year poured 61 percent of revenue into advertising. CarGurus spent 53 cents on advertising for each dollar of revenue. Travel venture TripAdvisor spent about 34 percent of net sales on ads.

For the first time, the FANG gang all rank among the top 100 U.S. advertisers
Facebook, Amazon, Netflix and Google parent Alphabet are all major media companies. And they are all spending more than ever on their own advertising.

Among the top 200 advertisers, 125 increased U.S. spending in 2018, led by Facebook
Sharpest decline: Sears and Kmart, whose spending tumbled 43 percent as the retailer sunk into bankruptcy. Sears and Kmart were No. 184 in Ad Age’s ranking. Sears was the second-largest U.S. advertiser as recently as 1983, when it was the nation’s biggest retailer. Sears and Kmart early this year were acquired in a bankruptcy court auction by investor Edward Lampert’s Transform Holdco.

Financial-services marketers had the highest U.S. ad-spending growth
With an 11.3 percent increase in 2018, based on total ad spending including advertising and marketing services, this was the category with the biggest growth among Ad Age Leading National Advertisers. That spending growth was led by 30 percent-plus gains at Wells Fargo & Co., Progressive Corp. and Capital One Financial Corp.

What’s next? One unknown is how long this economic expansion will last.

The Great Recession ended and the recovery began in June 2009. This U.S. expansion will become the longest on record on July 1, breaking the record of the March 1991-March 2001 expansion. (This assumes we aren’t already in a recession, something that won’t be known until the National Bureau of Economic Research makes the call on when the business cycle reached its peak, signaling start of a contraction.)

Ad spending generally mirrors the economy: Overall U.S. ad spending, and spending for Ad Age’s 100 Leading National Advertisers, fell during the recession years of 1991, 2001, 2008 and 2009. U.S. ad spending tumbled 12.8 percent in 2009, according to Publicis Groupe’s Zenith, the sharpest drop since the Great Depression. Spending for the 100 Leading National Advertisers fell 10.2 percent in 2009, the biggest decline since Ad Age began the report in 1956.

Here’s one fact: A recession is coming (at some point). Advertisers once again will grapple with whether to spend more, to defend and grow their brands in a weakening economy, or spend less, to protect (at least in the short term) margins and the bottom line. There’s always opportunity in a downturn.