The latest Barbie is Europe's only female astronaut

Mattel's famous doll has been modeled after European Space Agency's Samantha Cristoforetti as part of the Barbie Dream Gap Project. 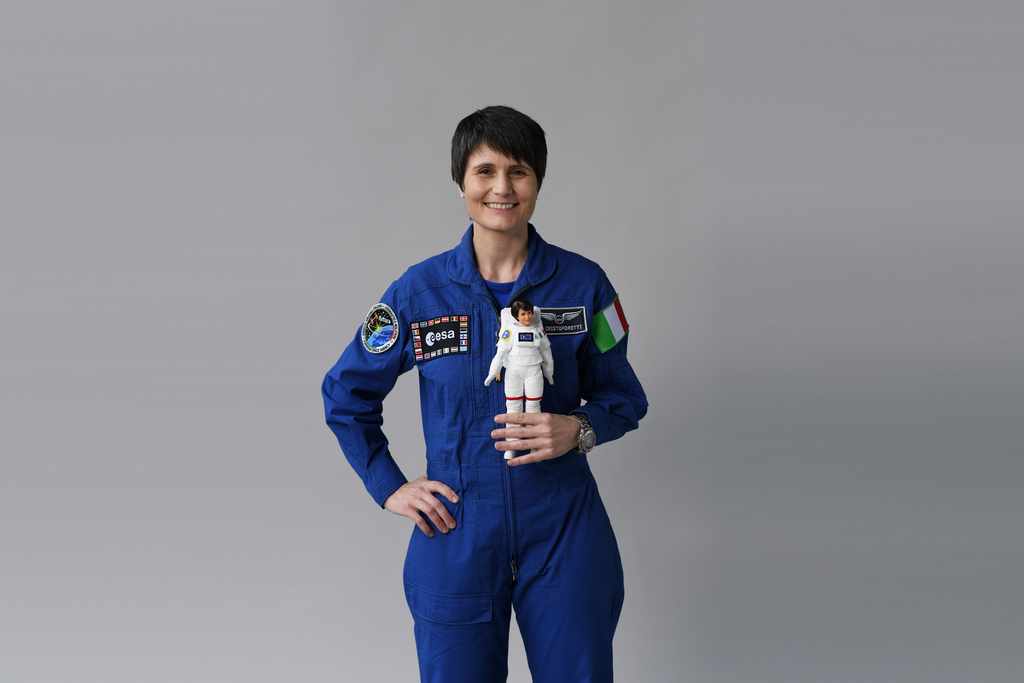 In a new partnership with the European Space Agency, Barbie is going where (almost) no doll has gone before. Ten days before the 50th anniversary of the Apollo 11 moon landing, Mattel is unveiling a commemorative Barbie doll to celebrate the achievements of real-life Italian astronaut Samantha Cristoforetti, the ESA’s only active female astronaut.

The doll will not be made available to buy, yet—though the toy brand has hinted at ongoing collaboration. The Cristoforetti Barbie is, however, the latest installment of the Barbie Dream Gap Project, an on-going initiative started in 2018 that donates $1 from every unit sold to a fund that is “dedicated to supporting like-minded organizations who are leveling the playing field for girls, while raising awareness to limiting factors that prevent girls from reaching their full potential,” according to Barbie’s website.

To launch the collaboration, Cristoforetti will also host a series of videos in which she gives guided tours to girls around the ESA European Astronaut Center in Cologne, Germany.

“We are proud to launch this collaboration with the ESA with a clear goal: to inspire girls to become the next generation of astronauts, engineers and space scientists,” said Isabel Ferrer, Barbie’s European director of marketing, in a statement. Ferrer echoed the idea that Cristoforetti’s doll may act as a stepping stone to increasing exposure of positive female role models for girls.

Following a 199-day mission to the International Space Station in 2014, Cristoforetti became the record-holder for the longest single space mission completed by a woman (which she held until 2017), and also made headlines during her trip for becoming the first astronaut to brew an espresso in space. Cristoforetti says she hopes her new collaboration with Barbie “will help young girls and boys to dream about their future without limits.”

Since her debut in 1959, Barbie has had more than 200 careers, and the brand’s recent collaboration with the ESA won’t be the first time the intrepid doll has gone into orbit. At the height of the Space Race in 1965, Mattel released “Astronaut Barbie,” a silver spacesuit-clad explorer of new frontiers who, according to the toy maker, “showed little girls they could reach for the stars.”

Still, research shows that Barbie's inspirational résumé may not always enough to counteract a lingering gender imbalance, especially in STEM fields—science, technology, engineering and mathematics. A 2017 study conducted by researchers from New York University, the University of Illinois and Princeton, and often cited by Mattel, found that girls may begin to develop self-limiting beliefs as early as age 5.

In a June 2019 survey of European parents of girls aged 3-10 in the UK, France, Germany and Italy, it was found that parents overwhelmingly agree that achievements of females in space need to be given more of an equal footing to that of males within the industry. The research, commissioned by Mattel, also concluded that parents generally know more about the accomplishments of male astronauts versus female ones.

To address the disparity, Barbie worked with UK clinical psychologist Dr. Elizabeth Kilbey to author a series of tips designed for parents of young girls to help spark their interest in STEM, which includes encouraging their daughters’ involvement in team sports, using STEM-related vocabulary from an early age and exposing them to positive female role models.

While Mattel’s latest doll was produced as a one-of-a-kind item to Cristoforetti herself and will not be on sale, unlike some of the brand’s celebrity-based dolls from the past, Barbie is remaining in talks with the ESA about future collaborations, including a possible space-themed doll, for public release.