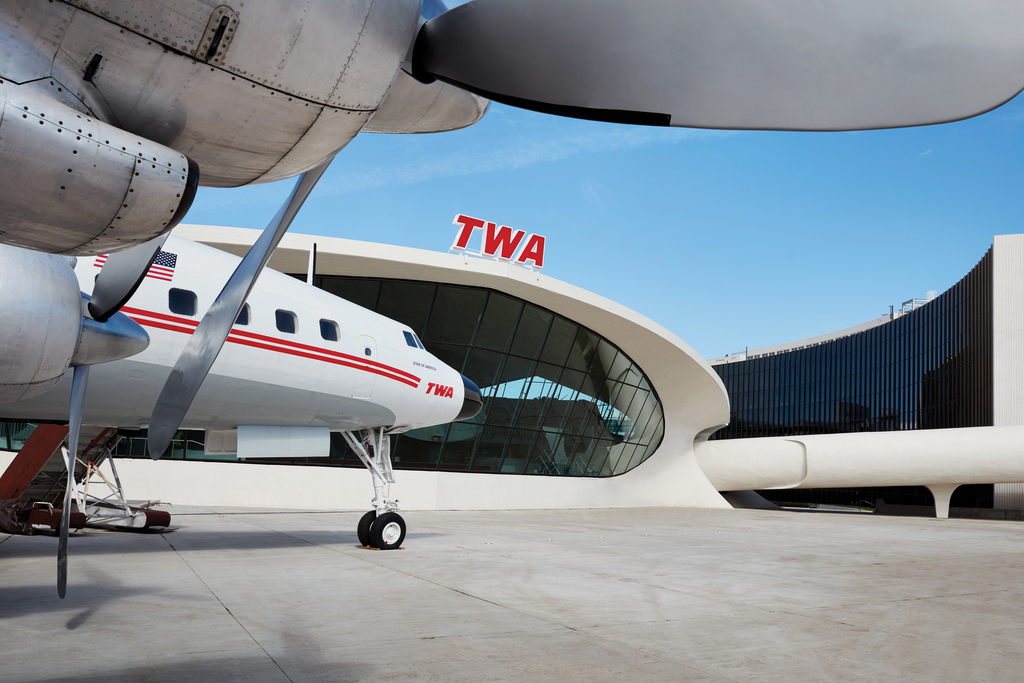 In the elevator, there are only two buttons: “Present Day JetBlue” for the first floor, and “1960s TWA Hotel” for the second. Nestled in a tucked-away corner of New York City’s John F. Kennedy International Airport, this elevator is a time machine.

Ascending to an isolated foyer, visitors exit into an arching tube that spits them out in the TWA Hotel, a sculpted, Instagrammable cavern of unmistakably ’60s curves and “Chili Pepper Red” carpeting. Employees dress in retro uniforms; Solari split-flap departure boards spin with the long-gone likes of Pan Am, Eastern and, of course, TWA. In the Sunken Lounge, ambient Frank Sinatra hits play while martinis and old-fashioneds are served alongside The Howard Hughes, a cognac-based cocktail named for TWA’s eccentric former owner.

It’s a carefully crafted illusion meant to transport guests back to the golden age of air travel, and save for some selfie-snapping visitors and electronic check-in kiosks, the illusion is unbroken.

While the TWA Hotel is among the latest embodiments of corporate nostalgia presented to the public, it’s just one of many examples born of an ongoing trend that has seen brands embrace their histories. In recent years, thanks in part to positive feedback from consumers, nostalgia has seen a resurgence in popularity with dozens of storied names in the hospitality, travel and food and beverage industries, among others. Marketers have been bringing back logos, slogans and campaigns and even long-lost products from their pasts in an effort to connect (and reconnect) with a broad range of audiences.

There are several reasons for this shift: brands hope to attract culture-hungry millennials who crave a product’s backstory; they’re riding waves of pop culture generated by retro-oriented entertainment; they hope to attract attention for their brands by rekindling nostalgia.

“For customers, we know emotional bonds matter, and nostalgia is a strong driver of emotion. When effectively tapped into, it can be a successful marketing strategy,” says Connie Birdsall, global creative director for brand consultancy Lippincott.

Taking flight
Dreamed up in the 1950s by architect Eero Saarinen at Hughes’ behest, the TWA Hotel began its life as the TWA Flight Center, a neo-futurist incarnation of the Jet Age that was way ahead of its time; it was one of the first airport terminals in the U.S. to be built with now-standard features like enclosed jetways and baggage carousels. While the terminal was adored by both JFK’s staff and the public, it quickly found itself facing an early retirement as jet aircraft got bigger and security restrictions got tighter—two things Saarinen and his relatively small, open-concept design failed to account for.

With TWA’s 2001 collapse, the obsolete property was shuttered while developers, preservationists and airport officials debated at length about its fate. It was nearly razed as JetBlue sought to build an expansive terminal on the site, though it was eventually agreed that the airline’s new Terminal 5 would be built partially encircling the landmark structure, left vacant and earmarked for potential use in the future.

“The plan from the word ‘go’ was to bring it back,” says Tyler Morse, CEO of MCR, which purchased the abandoned property in 2015. Morse, a former Delta Air Lines baggage handler, saw the revitalization of the TWA Flight Center as an opportunity to merge his passion for aviation with his expertise in hotel development, restoring the 512-room property to its former glory using original architectural prints and materials.

A quick glance at the hotel’s online availability calendar shows several sold-out dates through the end of the year despite an average $250-per-night room rate and some lukewarm online reviews—a sustained popularity that Morse attributes to more than just the hotel’s convenient location. “I think it’s kind of like Disneyland for adults. If you appreciate good architecture, if you appreciate good art—it’s candy for the eyes,” he says, adding that the hotel, which opened May 15, is an embodiment of a “terrific era” that captures the public’s imagination and has drawn a steady stream of guests.

Raising the roof
Last month, Pizza Hut became the latest major brand to unveil a throwback when it re-released its classic “Red Roof” logo, first developed by Lippincott in the late 1960s. Intended to resemble the chain restaurants’ distinct hump-backed trapezoidal roofs, the symbol became one of modern advertising’s most recognizable icons during its original use from 1967 to 1999. Revived to “reflect both the rich legacy of Pizza Hut, as well as nod to where we are headed,” says Pizza Hut Chief Brand Officer Marianne Radley, the old-school logo is meant to act as a bridge between the company’s longtime fans and new, younger consumers.

“When [Lippincott] designed the original Pizza Hut logo with its iconic red roof, it was created with the standard considerations in mind for back then—principally, will it stand out to travelers as they drive down a strip of highway? Now, it’s being used as an icon to showcase the brand’s enduring cultural relevance,” says Birdsall, a 30-year veteran of the agency, noting that brands that lean into their history may be hoping to recalibrate for the future by paying homage to their past. 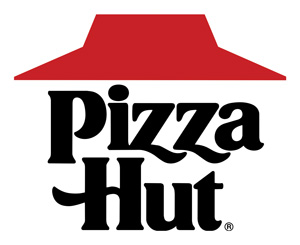 Pizza Hut’s red roof was initially designed to attract road travelers, but it also serves as a reminder of the brand’s heritage.

“People want to make a brand their own,” says freelance beer and spirits journalist Joshua Bernstein, who suggests that international beer giants and small-scale craft breweries alike have embraced nostalgic marketing and throwback packaging as brand elements perceived to be synonymous with good beverages.

Bernstein notes that mass-market domestic lagers, as the most-common variety of beer sold in the U.S. market, often share many similarities and can use eye-catching vintage labels to make themselves stand out on store shelves. “If you care about how [a product] looks,” he says, “chances are you care about how it tastes, too.”

In the past several years, beer brands have been cashing in on the nostalgia boom. Rhode Island brewer Narragansett has been introducing various nostalgic label designs for its portfolio of beers since 2012 and now emphasizes its World War II-era “Hi neighbor!” slogan. In 2013, Miller Lite revived one of its classic logos from the 1970s as part of a promotional campaign for “Anchorman 2” that proved so popular with consumers that the brand made it permanent. In May, Heineken-owned, Mexican-born Tecate launched its “Throw Back a Throwback” campaign centered on a limited-time run of “Edición Retro” cans designed to commemorate its 75th anniversary.

“For a lot of these long-running breweries, a retro label puts eyes back on the brand and its heritage,” Bernstein adds.

Uncharted youth
It might seem counterintuitive to assume nostalgia would draw millennials and Gen Zers who are unlikely to remember when a brand’s current throwback campaign was in its original run. “Why would you want to go back to a logo or iconography that your target has no familiarity with?” asks brand strategist Joe Anthony, founder of millennial-focused creative agency Hero Group.

“Well,” Anthony says, “young people want to know there’s an authentic backstory to your brand that allows them to determine how credible you are. It’s important for brands to have a story that goes beyond just that product.”

Anthony says younger demographics are “culture-cravers,” and as such, a brand that can express artistic value in its packaging or convey a compelling history via nostalgic marketing materials may succeed in winning over young audiences. “Brands want to say, ‘We’re still that same company with humble roots,’ so [they] reverse-engineer that value to an audience that may not be privy to a backstory,” he says.

Pop culture can also induce an appetite for nostalgia that brands can latch onto to boost their products. But brands cannot “sit on their hands and wait,” notes Anthony, who says he believes that brands have to be proactive in harnessing the marketing power of pop culture rather than hoping that it, in time, embraces them by chance.

From Miller Lite’s “Anchorman” tie-in to Coca-Cola’s revival of its infamous New Coke to promote Netflix’s ’80s-infused hit show “Stranger Things” (which now has promotional agreements with 74 other brands, including Pizza Hut), companies have long recognized the power of partnering with nostalgic pop-culture mainstays in a bid to draw new customers, tapping into vast demographics that may binge-watch a certain show, but might not (yet) be loyal to a brand.

What’s in it for businesses?
Nostalgia is generally an effective tool for brands, but companies that use it walk a fine line. To have a persuasive marketing campaign rooted in a corporate or social throwback, brands must strike an appropriate balance of developing excitement and curating nostalgia that holds the interest of consumers, both new and old. Otherwise they risk pandering and alienation.

According to a 2014 study published in the Journal of Consumer Research, brands that can successfully harness nostalgia may be in for significant rewards. The study found that when consumers feel nostalgic, they are willing to both pay more for a product and part with a larger percentage of their money overall.

“Nostalgia can serve as a signal of having attained ample social connectedness [which] can shift people’s motivations such that prioritizing and keeping control over money becomes less pressing,” wrote the study’s authors, Jannine Lasaleta, Constantine Sedikides and Kathleen Vohs. “Nostalgia may be so commonly used in marketing because it encourages consumers to part with their money.”