Hellish heat wave could be an advertiser's best friend

In missing the cut at the Open, Tiger Woods may cost NBC a small fortune. 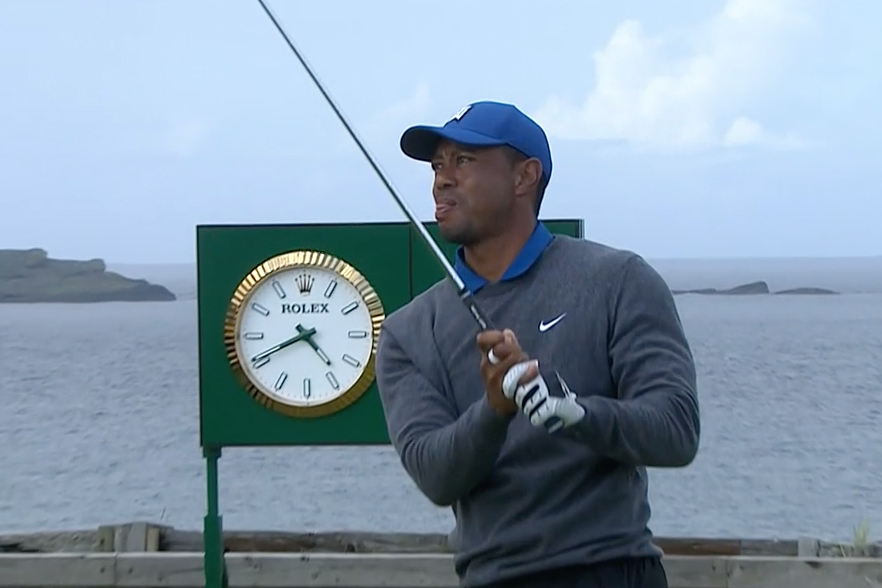 Three months ago, Tiger Woods clawed out his first major championship win in 11 years, and in so doing, seemed to have put an end to a decade marked by frustration, failure and grievous injury. His triumph in Augusta was an assurance that more Sunday victories would come, and in defying the ravages of time and a rickety spinal column held together with duct tape and Bubble Yum, the 43-year-old served as a beacon of hope for aging duffers and network ad sales execs alike.

But much like his beleaguered vertebral discs and long-defunct marriage, the promise inherent in Tiger’s Masters comeback has disintegrated. After shooting a 78 in the first round of the Open Championship, a career third-worst performance at a major, Woods this afternoon went on to miss the cut at Royal Portrush. In so doing, the man with 15 major titles under his belt made NBC’s weekend a lot less sunny, while reminding the rest of us imperfect beings that joy is temporary and we’ve all got graves to fill.

After Thursday’s nightmare round, which saw Woods gimping and grimacing his way around the course, the golfer seemed resigned to his fate. “[It’s] just the way it is,” Woods said in a post-round interview. “Father Time and some procedures I’ve had over the time. Just the way it’s going to be.”

Existentialist dread aside, Woods’ early exit almost certainly will put the squeeze on NBC’s ratings prospects. Last year, Tiger led the pack at Carnoustie as he headed into the back nine of the Sunday round. And while he couldn’t quite close the deal—he finished at five-under 279, three strokes behind Claret Jug winner Francesco Molinari—Woods’ late run galvanized TV viewers.

According to Nielsen, the final round of the 2018 Open averaged 6.48 million viewers and a 4.3 household rating, making it the tournament’s most-watched round since 2000. That the deliveries weren’t even bigger speaks to the time difference between the U.K. and the U.S.; NBC’s coverage of the event airs from 7 a.m. to 2 p.m. EDT, or from 4 a.m. to 11 a.m. for those on the West Coast.

Since Woods bagged his first major 22 years ago, the Tiger Effect has had a steroidal impact on Sunday golf ratings and average unit costs. When Woods won the Masters in April 1997, crushing runner-up Tom Kite by 12 strokes, he helped establish an all-time ratings record, as CBS’s coverage of the final round averaged a staggering 20.3 million viewers and a 14.1 household rating.

Although the attendant grief of four back surgeries and a host of other troubles largely neutralized Woods’ ratings magic for the better part of the last decade, the viewers began returning as soon as he found his groove again. When Tiger battled to a second-place finish behind Brooks Koepka in the 2018 PGA Championship, CBS’s deliveries soared to a nine-year high.

But Tiger giveth and Tiger taketh away—when he missed the cut at this year’s PGA tourney, the Sunday ratings plummeted 40 percent.

Since the decade began, Woods has missed four Open Championships, and his absence is evident in the Nielsen data. That quartet of Tiger-free Sunday rounds averaged 4.1 million viewers and a 2.8 rating, down more than 35 percent compared to last year’s multi-year high. As one might expect, the rates for in-match ad inventory are significantly higher when Tiger is sporting his Sunday red-shirt/black-pants finery.

In 2017, when injuries limited Woods to just two rounds of January golf, NBC aired its first Open since acquiring the rights from 55-year stewards ABC/ESPN. And while the network lucked out when wunderkind Jordan Spieth won his third major, the young champ didn’t command the high rates that Woods helped NBC snare the following year.

While long-term deals with Open stalwarts such as Mercedes-Benz, Geico and U.S. Bank generally help keep upfront rates from skyrocketing, scatter pricing in 2017 wasn’t nearly as robust as it was during the Tiger-centric 2018 round. Whereas the average 30-second unit in the final round of the 2017 Open fetched around $85,000 to $90,000 in scatter, the rates commanded by last year’s analogous broadcast were in the $145,000 to $150,000 range. Over the course of the afternoon, that can add up to a differential of around $8 million in total ad spend.

None of which is to suggest that NBC doesn’t have a chance at drawing a big crowd come Sunday. Koepka and Spieth are both just three strokes off the lead, and a late run by either of those two stars could make for a weekend ratings surge. But even if the two Americans don’t have a rally in their bones, the weather back home could do a lot of heavy lifting for NBC.

If meteorology is anything to go by, every citizen east of Oklahoma City will be projectile-sweating all over the place, as sizzling temperatures and stifling humidity send heat indices into the triple digits. As Sunday’s final foursomes begin making the turn into the back nine, it will feel as if it’s 111ºF in New York, 110ºF in Washington, D.C., and 106ºF in Boston. Anyone foolish enough to venture out-of-doors will risk heat stroke and death, while Willis Carrier’s grand invention will keep those of sound mind safely ensconced in front of the tube. If Tiger Woods can’t deliver for NBC, the Hellspawn of a midsummer heat wave may prove to be a worthy substitute.