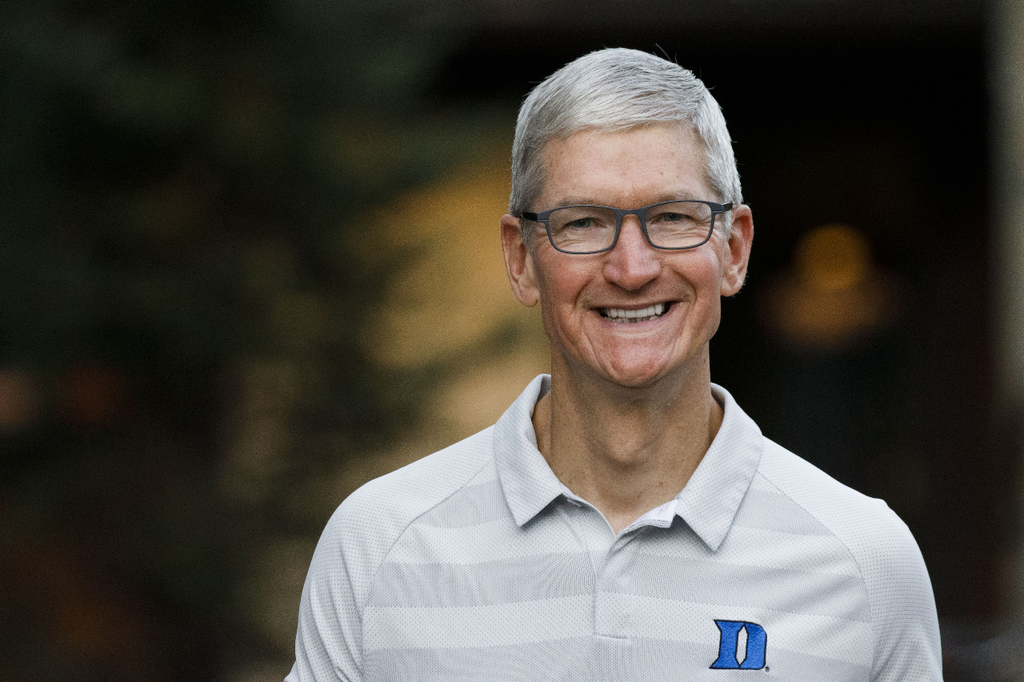 Apple CEO makes “compelling” case to Trump
President Trump had dinner with Apple CEO Tim Cook on Friday and, according to Bloomberg, Cook made a “good case” about Apple’s issues with the trade war on China. Cook described the difficulty in competing with Samsung if Apple products are subject to import tariffs, and Trump is quoted as saying: “I thought he made a very compelling argument.”

Cook made the point that Apple manufactures most of its devices in China, whereas chief competitor Samsung makes them in various countries including Vietnam and South Korea. Apple could potentially be hit with 10 percent tariffs as early as Sept. 1, as it prepares to launch important upgrades to Apple Watch and other products, and it could give Samsung an edge over its rival. It sounds as though Trump was listening, but we'll have to wait to see what transpires.

More on Trump: After the news broke last week that President Trump wants to “buy” Greenland from Denmark, John Oliver made the most of it in his Sunday show. As the Daily Beast reports, he compared Greenland to Melania, saying “Greenland is icy, distant and semi-autonomous—it’s exactly Trump’s type,” he added, before cutting to a picture of the First Lady.

Allstate beefs up its internal agency
The insurance giant Allstate is taking more of its marketing in-house, reports Ad Age’s Adrianne Pasquarelli, forming a 200-strong internal agency that it also plans to expand.

David Hernandez, who recently left Ogilvy to join Allstate as its first-ever chief creative officer, is leading the unit, and is tasked with “creating content on a variety of advertising channels that the brand can deliver in real-time.” It comes as the company is trying to broaden its reputation beyond car, life and home insurance and become a "holistic" protection company.

The move puts more pressure on Allstate’s external agencies such as Leo Burnett, which has held the account for 62 years and created its well-known “Mayhem” campaign. But it also has wider implications; as Pasquarelli writes: it "marks yet another setback for the agency industry, whose fees have come under pressure as more big marketers move work in-house.”

Barstool founder faces investigation
The controversy at Barstool Sports is escalating, with the sports media company’s founder Dave Portnoy facing an investigation by the National Labor Relations Board, according to the Hollywood Reporter, following his inflammatory tweets about unions.

As reported by Ad Age’s Ilyse Liffreing last week, Portnoy threatened to fire any of his employees who seek to unionize—and now, according to the article, a group calling itself the Committee to Preserve the Religious Right to Organize has filed charging papers at the NLRB against Barstool Sports.

As quoted by the Hollywood Reporter, the charge makes interesting reading, calling Portnoy “crazed" and demanding that he tweet a "severe and sincere" apology to his employees. The NRLB acknowledged the filing and is seeking a response from Barstool.

Just briefly:
Home smart: Ikea has announced that it will invest heavily in a new “Ikea Home smart” business unit, reports The Verge, to compete with smart home players like Google and Amazon. The Swedish retailer said it was the biggest new business it had established since the introduction of Children’s Ikea.

Playing: Cheez-It has signed a multiyear pact to serve as an official sponsor of the College Football Playoff series, writes Ad Age’s Anthony Crupi. The Kellogg’s brand joins a roster of 14 other CFP backers.

Trouble: Nordstrom’s year-on-year sales and profits are expected to fall for the second consecutive quarter when it reports results on Wednesday, according to the Wall Street Journal. Its troubles follow those of Macy's, whose stock plummeted last week after poor results.

‘Top brands’: Amazon is designating products sold by certain companies as “top brands,” according to Bloomberg. The company confirmed that products from Speedo, New Balance, Under Armour and Fruit of the Loom were given top-brand status in some product search results.

Campaign of the day: Attention Bridezillas: you too can have the perfect honeymoon, but only if you say “Hotels.com” in your wedding vows. The hotel booking site is linking with Hulu’s new “Four Weddings and a Funeral” series for a promotion in which, writes Ad Age’s Ilyse Liffreing, “Couples who incorporate 'Hotels.com' in their wedding vows in some way, film it and share it online with the hashtag #HotelsSponConVows, can be entered to win $15,000 towards their honeymoon.” Find out more over at Creativity Online, and in the meantime check out Creativity’s Top 5 campaigns from last week, including Publicis Seattle’s designing of a logo for the 2022 Special Olympics, working with some of the athletes themselves.