ESPN flags a standoff with AT&T during ‘Monday Night Football’

Another day, another carriage scrap

AT&T wades into another carriage scuffle, this time with Disney/ESPN. 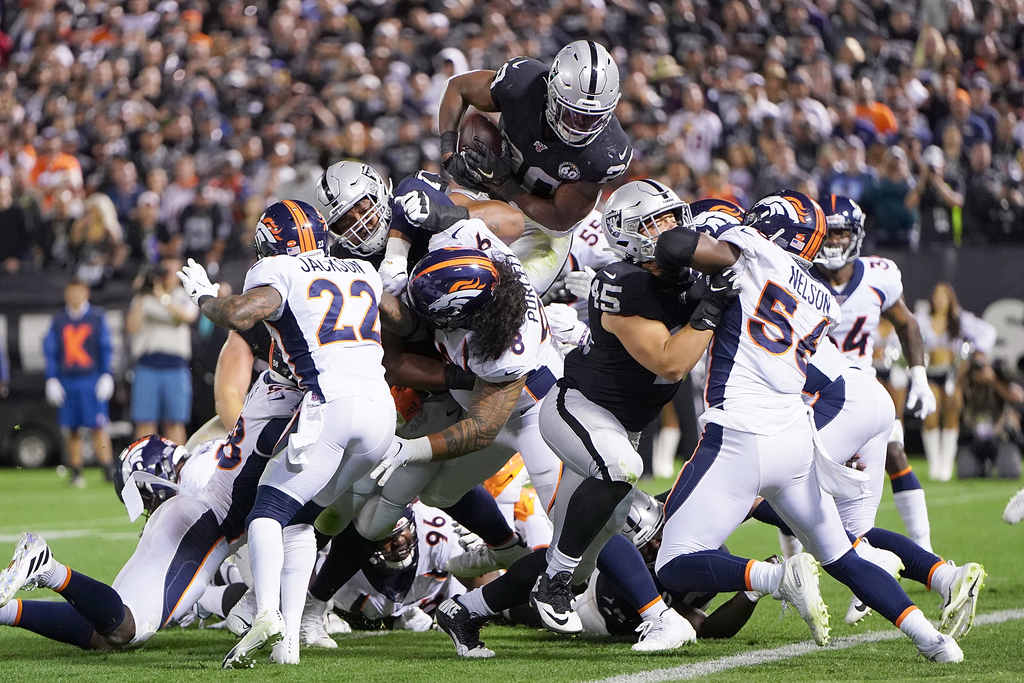 The Oakland Raiders vs. the Denver Broncos on Sept. 9 in Oakland, California.

Yet another carriage feud is heating up, as ESPN alerted “Monday Night Football” viewers that it and its Disney siblings could go dark in homes serviced by DirecTV and AT&T U-Verse.

As the Houston Texans and New Orleans Saints fought it out in ESPN’s early window, DirecTV subs were served up 30-second commercials that warned about the potential for an interruption in service in coming weeks. One spot that aired in Pennsylvania’s Harrisburg-Lancaster DMA included a block of text that read, “Attention customers: Don’t lose ESPN.” Viewers were directed to call an AT&T customer service number in order to “keep the networks you are paying for!”

ESPN also ran alerts in its on-screen ticker. One message that popped up during the late Broncos-Raiders telecast read “ESPN may soon be gone from your channel lineup” and then offered a short list of what AT&T subs would miss (“Monday Night Football,” college football, “SportsCenter”) in the event of a blackout.

ESPN’s contract with the AT&T-owned distributors is set to expire at the end of September, and should an agreement fail to be reached before then, subscribers may be shut off from not only the ESPN-branded networks, but also SEC Network and the newly-launched ACC Network. In addition to the disruption on the cable side, DirecTV/AT&T customers in eight markets would lose the signal from their local ABC affiliates.

Among the ABC stations that would be impacted by a carriage stalemate include WABC-7 in New York, KABC-7 in Los Angeles and KGO-7 in San Francisco.

The KGO-7 Facebook page got in on the action last night, posting a message that informed ABC viewers that the negotiations with AT&T weren’t going swimmingly: “Unfortunately, so far they have refused to reach a fair, market-based agreement with us. … We are as disappointed as you are about this situation.” The Facebook post went on to note that the deal being discussed with AT&T “is in line with recent marketplace deals we have reached with other distributors.”

AT&T for its part released a statement in which it said it was “disappointed to see the Walt Disney Co. put their viewers into the middle of negotiations.” The note went on to say that AT&T hopes “to avoid any interruption to the services some of our customers care about.”

This is only the latest distribution scuffle AT&T has stirred up in recent months; the phone company and its DirecTV subsidiary tried to play hardball with CBS in July, but wound up knuckling under just a few weeks later. In inking a new affiliate deal with CBS, AT&T managed to avoid a scenario in which some 6.5 million DirecTV subscribers would have been shut out of the network’s Sunday afternoon NFL coverage as well such high-impact primetime series as “NCIS” and “Young Sheldon.”

A widespread Disney outage would be similarly unpopular, as ESPN tends to be cable’s biggest draw in the fall. Much of that hegemony has to do with its NFL coverage; per Nielsen, ESPN’s “Monday Night Football” doubleheader last night scored its highest ratings since 2015, as the two windows averaged 11.8 million viewers, up 18 percent vs. the year-ago 9.96 million.

In the event of an October blackout, the first three “Monday Night Football” telecasts to be denied AT&T/DirecTV subs would be Browns-49ers, Lions-Packers and Patriots-Jets.

While AT&T’s leverage is wrapped up in its massive subscriber base—per a second-quarter earnings statement, its pay-TV platforms boast 22.9 million paying customers—the company of late has been struggling with higher-than-expected churn rates. Since the year began, AT&T has watched 1.57 million video subs walk out the door, well north of the 1.24 million customers it lost in the whole of 2018.

As with all carriage scuffles, money lies at the heart of the Disney-AT&T standoff. ESPN charges operators a vertiginous $9.06 per sub per month for its full channel bundle, making it by far the priciest offering on the cable dial. By comparison, AT&T/WarnerMedia’s TNT, which is the second most-expensive national cable network, charges operators around $2.10 per sub per month. Both figures are in stark contrast to the average fee for all broad-reach cable channels, which works out to around 30 cents a pop.

As much as ESPN’s “Monday Night Football” blitz would seem to suggest that the negotiations are at an impasse, precedent says that the two sides may agree to an extension if a new contract isn’t hashed out before the deadline. Such was the case five years ago when Disney and DirecTV worked out their current carriage agreement. In the meantime, football fans can expect the PR flame war to heat up during ESPN’s upcoming Browns-Jets, Bears-Skins and Bengals-Steelers telecasts.

Rarely do both sides get up from the table without resolving the matter, but history favors the networks over the distributors. After all, it’s hard to win the battle for hearts and minds when you send out a monthly bill for your services. While the AT&T and DirecTV logos are stamped all over the billing statement, and everything from equipment rental fees to various administrative charges and adjustments are itemized within, nowhere will a customer find a breakdown of ESPN’s affiliate rates.