Motorola brings back the Razr as a $1,499 foldable smartphone

It’ll be a Verizon exclusive in the U.S., arriving in January

It’ll be a Verizon exclusive in the U.S., arriving in January. 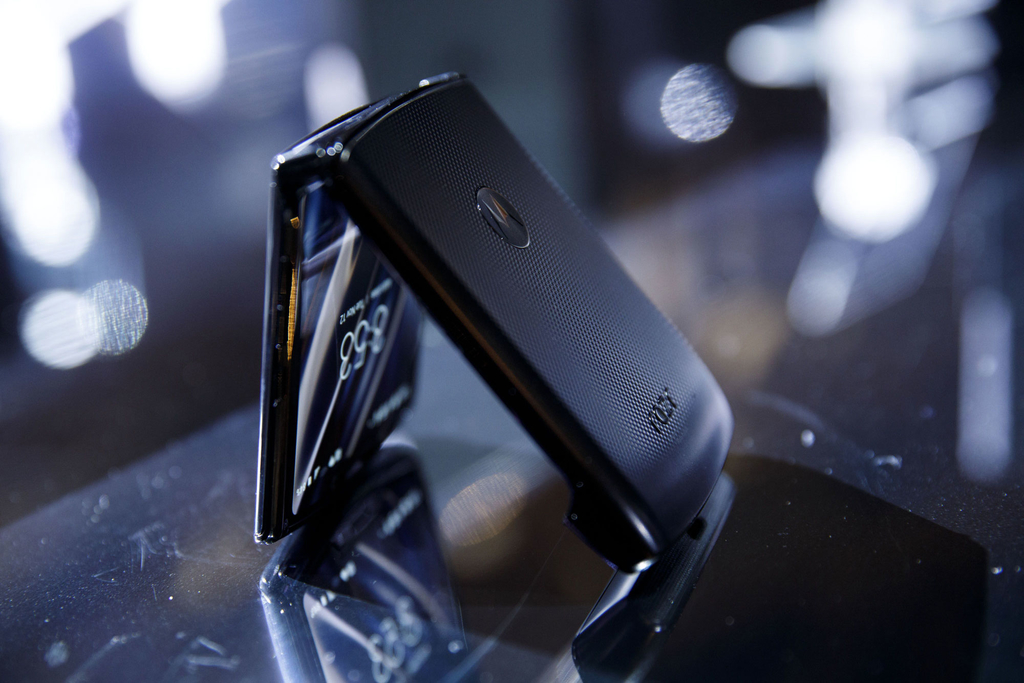 Motorola is rebooting the iconic Razr flip phone as a 6.2-inch smartphone with a foldable display that gives the Lenovo-owned brand a unique selling point against Apple’s and Samsung’s finest.

The new device reprises the Motorola Razr name and looks like a modernized version of the original. It costs $1,499 and will be available for pre-order in December in Europe and as a Verizon exclusive in the U.S., ahead of its retail arrival in January. For Lenovo Group, which has a tiny fraction of the global smartphone market, it's an effort to build brand awareness in the U.S. via a halo device.

Launched in late 2004, the first Razr became a cultural icon in the U.S., sold 130 million units and was the face of the phone industry before Apple launched the iPhone in 2007. Motorola’s new model has a shot at some fame as well, as it’s set to become the first true foldable smartphone on the market—every other device so far could more properly be described as a foldable tablet—and company executives say they are confident that their design won’t succumb to the durability issues that pushed back Samsung’s Galaxy Fold launch.

The 2019 Razr is no bargain, but compared to the $1,980 Galaxy Fold or Huawei Technologies’s $2,600 Mate X, it’s the most affordable member of the most expensive modern phone category. The compromise that users will have to accept with the Razr is in some of its specifications: It has a small battery at 2,510mAh and runs the older Android 9 Pie operating system on Qualcomm’s sub-flagship Snapdragon 710 chip. It lacks the 5G option and bountiful memory of its rivals. Aside from the U.S. and Europe, it’ll also be on sale in Latin America, Asia and Australia.

Motorola President Sergio Buniac says he doesn’t see the launch as a “silver bullet” for rocketing Motorola’s sales up to Apple and Samsung numbers. Over the past several quarters, Motorola has turned its mobile business from a flailing unit of China’s Lenovo to profitability in many markets, he said. The new Razr is intended to continue that even without strong sales. Buniac says he’s hoping for “a little bit more” demand than supply, while Lenovo Chief Operating Officer Gianfranco Lanci says “it will bring greater awareness to the brand, especially in key markets like North America.”

Motorola’s take on foldable phone design is markedly different from the first batch of foldable devices. Instead of a vertical hinge that makes it open like a book, the new Razr opens and closes like a classic flip phone. Closed shut, the phone is a square that’s about half the size of an iPhone 11 Pro Max, and Motorola has used the foldable technology to make one of the most portable phones on the market. In the process, it’s brought back the action of flipping the phone shut to hang up calls, which is something most premium smartphone consumers haven’t done in at least a decade.

Samsung is planning to introduce its own square-shaped foldable phone as its second Galaxy Fold device early next year. Until that time, Motorola looks set to be all alone in offering a regular smartphone capable of collapsing into a pocket-friendly clamshell.

“We wouldn’t be bringing the product to market if we didn’t think it was ready,” says Buniac, underlining Motorola’s belief in the reliability of its particular hinge and fold design. Samsung’s Galaxy Fold had issues with air bubbles popping up beneath the display and tiny particles getting trapped under the screen. Touting a so-called zero-gap design, Buniac says that “Our expectation is that we will have a reliable product, and as we launch you will see, but we are confident in what we achieved.”

In a brief hands-on test with the Razr, the handset looks and feels impressive. Its screen felt fragile, but the device’s design chief Ruben Castano says “We feel like we’ve really developed a robust solution,” pointing to stainless steel structural plates between the bottom of the inner screen and the device’s internals. He says that layer will help prevent particles like sand from going into the device’s electronics and breaking the display. There’s also a 2.7-inch exterior touchscreen for quick access to commonly used functions and checking notifications.

Similar to Samsung, Motorola will offer 24-hour turnaround replacements under a standard warranty for display failures, and it will charge $299 if the issue falls out of warranty in the U.S. The phone will be sold via Verizon Wireless as the exclusive launch carrier in the U.S. and will be available at Verizon and Walmart stores from January.

The Razr’s inner display has a high-resolution panel whose crease is more subtle than the one on the Galaxy Fold. When unfolded, the Razr operates like most other Android phones, running a full touchscreen version of Google’s operating system. The external screen is designed for light interactions like answering calls and texts, but like the front screen on the Galaxy Fold, it’s not something most consumers are likely to use much. The new Razr is a flip phone at heart and that’s how most people will want to use it.

Castano says that Motorola started working on a foldable design around 2015 and that its biggest challenge was being able to match the first Razr’s ability for the phone to be fully shut with no gap. Like the original Razr, the 2019 model has a chin at the bottom that houses electronics such as the LTE antenna. It also has a notch at the top of the main display, lacks a headphone jack and will be available only in black and with 128GB of storage without further upgrade options. Its camera and battery specs are underwhelming, though Motorola promises “all-day battery life” without quoting an exact number of hours.

Motorola’s other big task will be to prove itself at the super premium end of the market that’s long been dominated by Samsung and Apple. Since the first Razr, the Motorola brand has worn many hats, having served as a middling iPhone counter with the Verizon Droid, and having gone through a $12.5 billion Google acquisition and eventually ending up in the hands of Lenovo. It now needs to rebuild its own brand identity.

But the Razr’s shortcomings may very well not matter. This device is designed to appeal to those nostalgic for the flip-phone era, for whom specs may not be a priority, as well as the early adopters of new technology, who are more tolerant of first-generation imperfections.