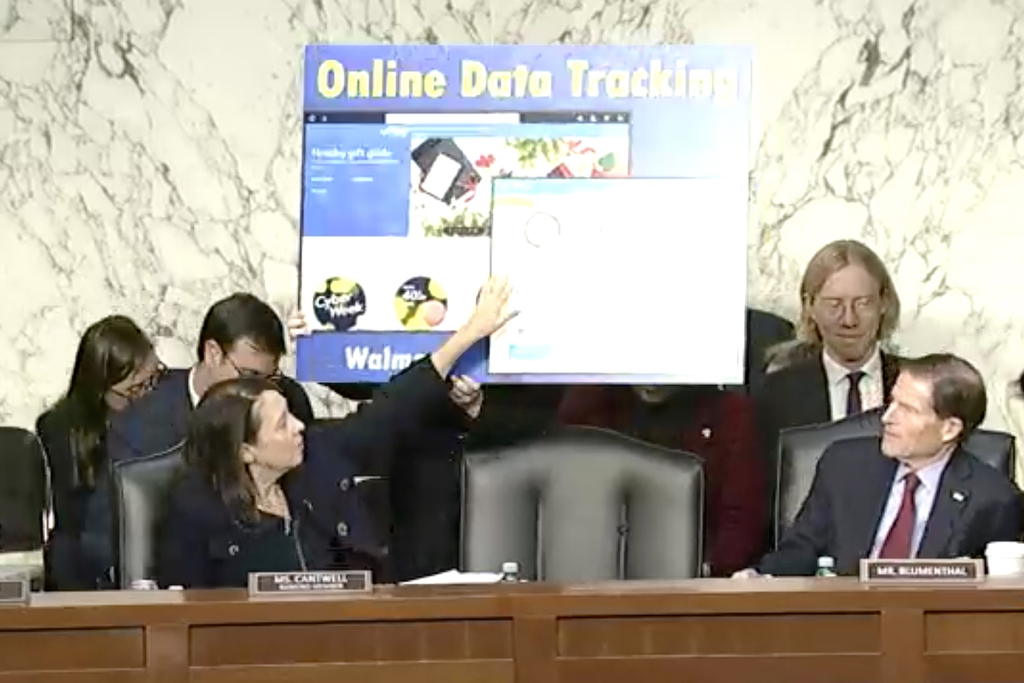 A top Senator confronted Walmart’s privacy chief with questions about how the company conducts online tracking through its website during a hearing to discuss the potential for nationwide consumer data protections on Wednesday.

U.S. Senator Maria Cantwell of Washington held up a graphic that showed Walmart’s website contains 19 trackers, which are common throughout the internet. Cantwell apologized for singling out Walmart but questioned whether consumers were well-informed about the types of data online trackers can collect.

“You should be more upfront about that,” Cantwell said. “That’s just a little too vague on what’s happening to information and data.”

Nuala O’Connor, SVP and chief counsel for digital citizenship at Walmart, said that the trackers do not enable Walmart to share personally identifiable information with third-parties outside the company, and they are used to make its services better.

“Most of what you saw ... is likely online tracking that we do of ourselves to see who’s coming to the website,” O’Connor said. “To see how long they’re staying, to better service you on a return visit, so that as you probably note when you leave and you’ve got something in your basket, it should hopefully be there when you return.”

“We do not sell or lease personally identifiable information about our customers outside of the Walmart family,” O’Connor said.

The line of questioning touched on some of the core issues before Congress as it crafts online privacy legislation—which entities should be allowed to track consumers, collect their data online; and how can those practices be explained to consumers in a simple way. The Senate is considering a number of competing proposals to reign in online data abuses, and O’Connor was among the experts called into testify. Julie Brill, former commissioner of the Federal Trade Commission and current corporate VP and deputy general counsel at Microsoft, also testified.

Despite the light call-out of Walmart’s tracking, the session was mostly tame and far less tense than similar proceedings over the past two years that have featured executives from Facebook, Google and Twitter.

Cantwell opened her remarks on Wednesday by noting that all five members of the panel are “people I know for sure care for privacy.”

In contrast, Senator Sherrod Brown had lambasted Facebook as “dangerous” in a hearing in July that included an executive from the social network.

The Senators are drafting bills that would increase the oversight power of the FTC, restrict how companies collect and share consumer data online, and provide a nationwide set of rules that would guide companies instead of a patchwork of regulations coming out of every state. Industries, especially advertising, worry that states could all go their own way and pass laws like the California Consumer Privacy Act that is taking effect in 2020.

“We are scrambling to be ready for the Jan. 1 compliance date at Walmart in California,” O’Connor said. “And to echo what has already been said, simply adding more complexity to consumers lives is not actually, I think, helping their privacy.”

The ad industry has been preparing for new rules on privacy by lobbying for its own protections as lawmakers write the bills. Just this week, the ad industry group Privacy For America issued a policy “framework” that represented input from five major advertising trade organizations.

Advertising companies and major brands are concerned that the strictest privacy measures will leave them at a disadvantage compared to the top companies in tech like Facebook, Google and Amazon. These three tech giants, for instance, have larger online platforms with direct relationships, making it easier to obtain consent from consumers to use their information.

Brill, Microsoft’s counsel, argued for some leeway when it comes to third-party data sharing, which would let companies piggyback on other companies’ relationships with consumers to make use of that data.

Some senators seem to be most-swayed by the “competition” argument, worried about enacting regulations that would stifle startups that are not as well-equipped to respond to the government’s new demands.

“The road to protecting consumers’ privacy is many times paved with good intentions,” said Maureen Ohlhausen, co-chairwoman of 21st Century Privacy Coalition, “but very difficult and fraught with peril.”