As part of our ‘90 Years of Ad Age’ series, a look at vintage Big Pharma marketing
READ THIS NEXT
As Verizon tries to offload HuffPost, a history lesson from Rupert Murdoch 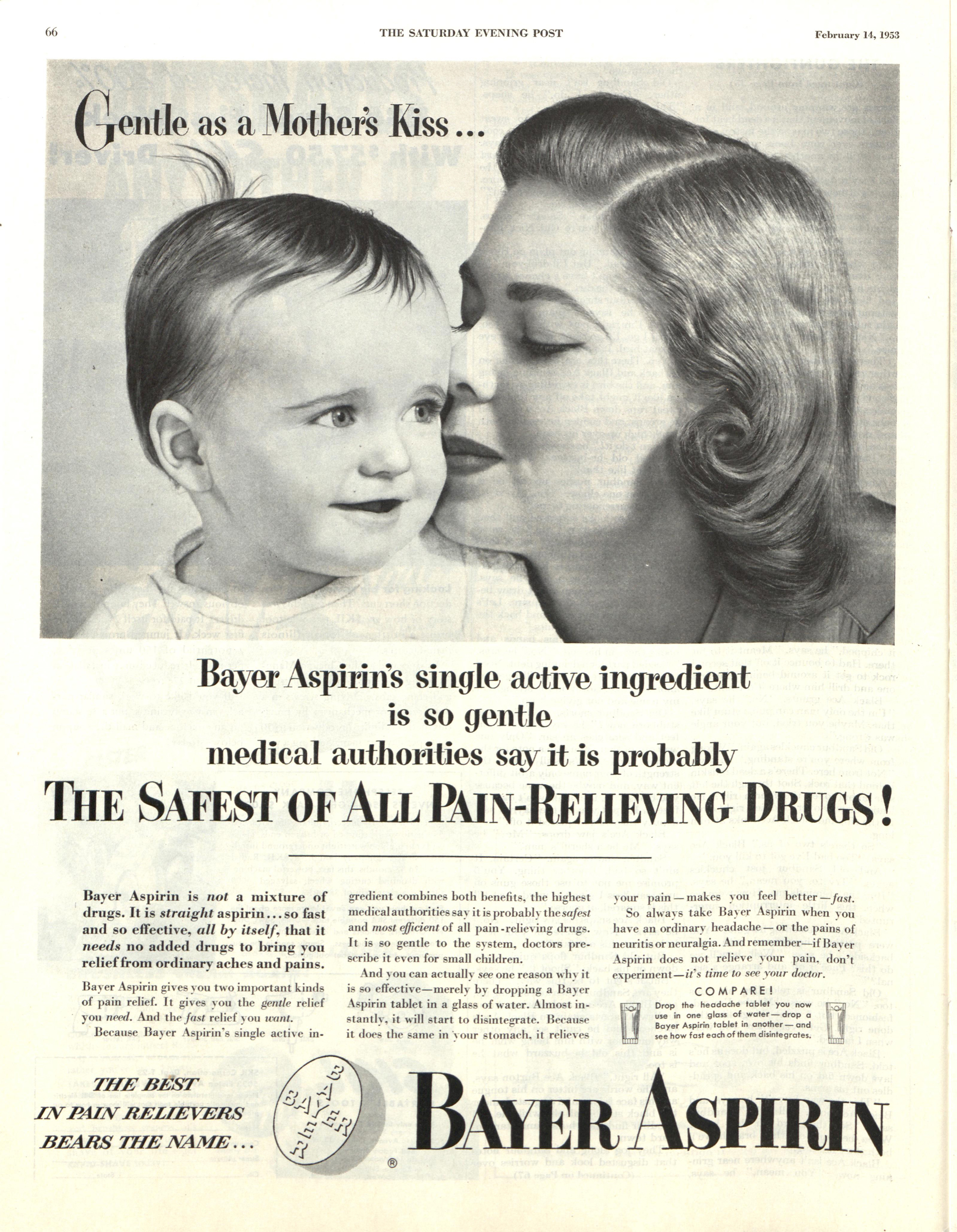 A 1953 Bayer Aspirin ad that appeared in The Saturday Evening Post.

Big Pharma can’t stay out of the headlines lately. Well, sure, pretty much all the time—but especially right now, during the pandemic.

On Wednesday of last week, for instance, Pfizer made news courtesy of the Trump administration, which signed a $1.95 billion contract with the New York-based pharmaceutical giant to produce a COVID-19 vaccine. Working with a German partner, BioNTech, Pfizer plans to manufacture 100 million doses of a still-unproven vaccine by December, which works out to about $20 per dose. (Safety and efficacy trials are only beginning this month, so stay tuned.)

When it comes to the pharmaceutical industry, though, the White House giveth and it taketh away. A day later, on Thursday, The Hill was reporting that Trump was on the verge of signing one or more executive orders focused on reining in drug prices, to make an election-season appeal to voters traumatized by ever-rising prescription costs.

As the Big Pharma headlines continued to unfurl, we dove into the Ad Age archives for our “90 Years of Ad Age” series. The most eye-opening find: A front-page story from August 23, 1948, headlined “Sterling Drug Sales Pegged on $25,000,000 Drive.”

Sterling Drug was founded in 1901 in Wheeling, West Virginia. By the late ’40s, it was a roaring success—a marketing-driven multinational. The company, we reported, had one helluva global marketing budget: It was set to “spend approximately $25,000,000 to advertise its products in world markets” in 1948 “and on this expenditure expects a $135,000,000 return in gross sales.”

A $25 million budget in 1948 translates to more than $274 million in today’s dollars. Ad Age made it sound like the company’s president and de facto marketing chief, James Hill Jr., was almost a profligate spender. Or at least an extremely enthusiastic one.

As Sterling expanded beyond the borders of the U.S.—marketing its aspirin in Central and South America, for instance—we reported that “liberal advertising budgets were provided; Sterling employed its tried and trusted technique of reaching as many people through as many media as often as possible.”

That said, there was some method to the madness. Most notably, Hill cut back on radio and worked newspaper and magazine advertising into the mix. “We want people to recognize our products when they see them,” Hill told Ad Age. (TV was still a couple of years away from meaningful market penetration.)

Sterling, by the way, is no more. Parts of it would eventually come to be owned by Eastman Kodak, then SmithKline Beecham and ultimately Germany’s Bayer AG (which, incidentally, allowed Bayer to regain the rights to its own name in the U.S., which Sterling had bought on the cheap at the end of World War I at a government auction of German trademarks that had been seized as war reparations).

As for Pfizer, it just landed at 22nd place on the newly released Ad Age Leading National Advertisers 2020 ranking. Ad Age Datacenter estimates that Pfizer’s 2019 outlay on U.S. advertising was $1.9 billion—right around the amount the company and its German partner hope to get for 100 million doses of a vaccine they won’t have to advertise at all.