Original Actors Are Back to Tell a 'User-Generated' Tale in New Campaign From W&K N.Y.
READ THIS NEXT
Marketing winners and losers of the week

Children of the '80s will no doubt feel a deep pang of nostalgia when they see "The Neverending Story" characters Atreyu and Falkor soaring together through the skies, once again, as Limahl sings the title track of the classic fantasy film in a new campaign from Spotify.

However, the scene is not a clip from the original movie -- it takes place in the present, the characters 30-plus years older. "I can't believe after all these years, people are still listening to the song," Atreyu, now a man, says to his pal. "Me neither! Ha ha ha!" dog-dragon Falkor, as fluffy as ever, guffaws back. The spot goes on to say, "'Never Ending Story' by Limahl: Still Streamed Every Day."

The ad reveals just one of the interesting factoids illustrated in Spotify's new brand campaign, created out of Wieden & Kennedy New York and beginning today. The idea is that behind every track on Spotify, there's a story -- one created by its users. It's the first big effort under new CMO Seth Farbman, who joined the company last year following his four-year tenure at The Gap, where he previously worked with Wieden & Kennedy.

Another ad in the campaign stars nuns in a church, nodding their heads to a rock track, then reveals that Pope Francis dropped a rock album that has 1,500 listeners a week. A third spot capitalizes on election season and depicts a couple on the road pulling their home on a trailer as they bop their heads to Flo Rida's "My House." That one's aimed at folks who may decide to move to Canada come November, and notes that the track has been added to hundreds of "Moving" playlists on Spotify.

The spots will run on TV, in movie theaters and online. The campaign also includes print and outdoor featuring imagery from the commercials and pointing to dedicated URLs that send listeners to specially curated playlists: Neverending80s.com, MovingUptoCanada.com and RockingNuns.com. Denizens of Manhattan and Williamsburg, Brooklyn, will also be treated to a giant hand-painted mural of Atreyu riding Falkor.

According to Jackie Jantos, VP-creative and brand strategy at Spotify, the brief to the agency was simple: "We think what makes Spotify special is our community of users, so we asked the agency to interpret interesting things happening in culture through learnings about the community."

"Spotify is built around an amazing community, but if you don't use it, it's hard to really appreciate and understand," said Wieden & Kennedy New York Creative Director Brandon Henderson. "There aren't many windows into the product. So, taking the [user] data, we wanted to develop a human and accessible voice for the brand to show the outside world all the insane things that are happening on the inside. The great thing about all that Spotify data is that truth is often stranger than fiction. There are so many great stories hidden in the data."

Spotify, which has 30 million paying subscribers and 75 million active users to either its paid or free services, is no stranger to turning its data into innovative marketing ideas. Last year, for example, for its "Year in Music," the brand allowed listeners to see their personal 2015 Spotify story on a site that aggregated their listening data of the past twelve months, including how much time they spent on the platform and which artists filled their ears the most. Last June, it also introduced "Taste Rewind," which allowed you to see what you would have listened to had you grown up in a different decade. 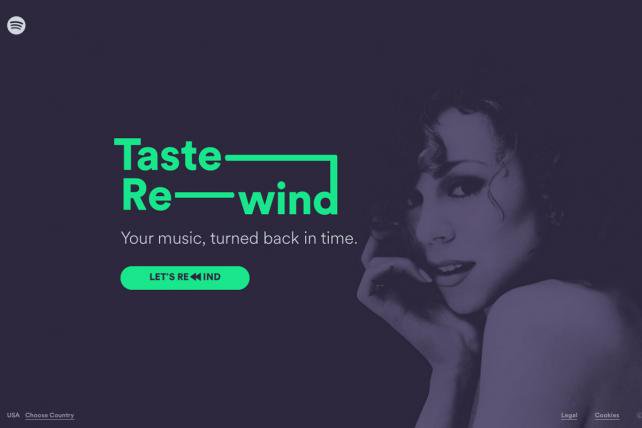 This time, however, the campaign is meant to reach to the broader audience beyond existing Spotify members, said Ms. Jantos. The "Neverending Story" spot, for example, can speak to a diverse fan base --those who experienced the film in the '80s, as well as younger consumers. In the case of "Neverending Story," Ms. Jantos explained, "It's a piece of content that is still so admired, but also has so many interesting current and modern memes around it."

That particular ad, conceived by the creative team of William Binder and Jed Heuer, was borne out of a real-world experience. "The writer, William, was at a party where someone was playing it ironically," explained Mr. Henderson. "When he looked up the song on Spotify he was amazed by how many streams it had. Two months later, we have our Falkor spot."

Directed by Tim Godsall out of Anonymous Content with effects created out of Method Studios, the spots features the original talent from the films, actor Noah Hathaway, who played Atreyu, and Alan Oppenheimer, the original voice of Falkor.

"Since we were dealing with a movie that has such a loyal following it was important to us that it be authentic," said Mr. Henderson. Production-wise, there weren't any huge hurdles, aside from "several gallons of cover-up paint to mask out all of Noah Hathaway's full arm sleeve tattoos," said Wieden & Kennedy Creative Director Erwin Federizo.

As for Falkor aka Mr. Oppenheimer, perhaps the biggest obstacle was the fanboys on the job. "As excited as we were to be able to get the original voice of Falkor, we were even more excited to learn that he was also the voice of Skeletor," said Mr. Henderson.

Not present for the shoot this time around was Falkor's body, which is now on display at a museum in Munich, Germany. To reproduce the flying scene, "We green-screen filmed Atreyu riding on top of a hairy, white Falkor shell that our production company recreated," said Mr. Federizo. "Method Studios then merged our green screen footage with the original film from the movie."

Nevertheless, Mr. Hathaway "was very excited to climb back on top of Falkor to take one more epic ride," said Mr. Henderson. Added Ms. Jantos, "It was funny seeing him on set saying, 'I'm having some serious de ja vu.'"