Also in this Turkey Day-themed Agency Brief: a few wins for thankful agencies
READ THIS NEXT
Agency Brief: Will lawyers take your jobs? 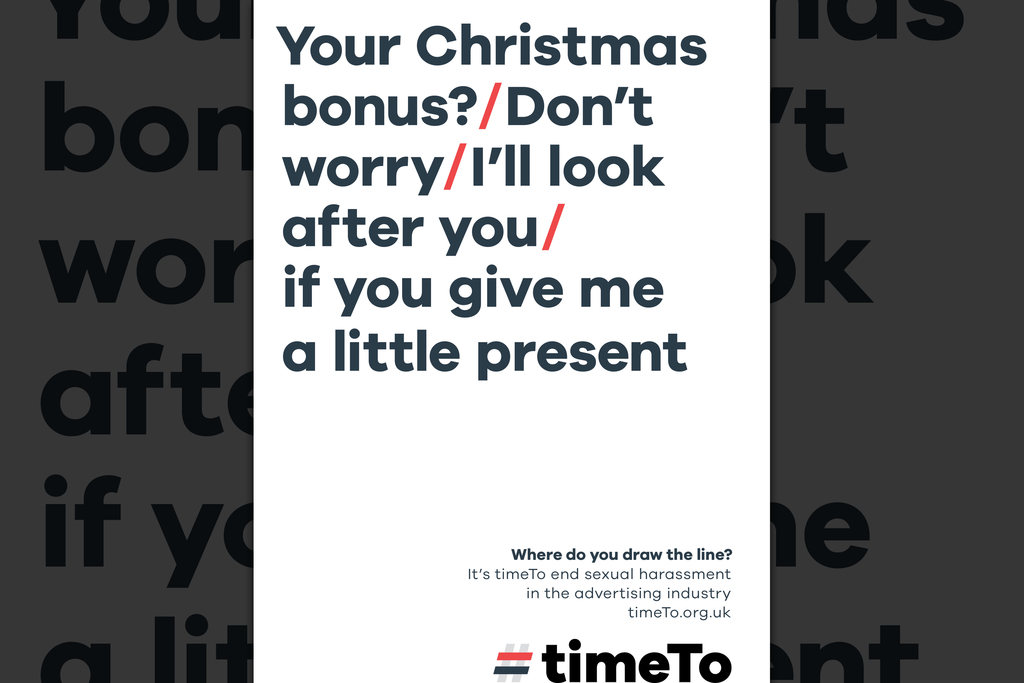 As part of a campaign from Lucky Generals for timeTo, posters question where people should 'draw the line' on workplace sexual harassment

Happy belated Thanksgiving to all. Hopefully you are reading this week’s Agency Brief from the comfort of your homes, with a tummy full of turkey or cauliflower or tofu or [insert whatever you eat here, we're sure it was delicious]. Or perhaps you’re one of the 36 percent of consumers out shopping in brick-and-mortar stores during the diminished Black Friday holiday, per The Washington Post. (Can I get an “OK, Boomer”?) If you are at an agency and working today (on a big pitch that you plan to leak to Ad Age, yes?), our condolences.

Where do you draw the line?

Lucky Generals, the TBWA-owned U.K. creative agency that crossed the pond to New York in February, reminds those in the industry to be respectful of one another and act appropriately heading into office party season. For timeTo—an initiative to end sexual harassment in the U.K. from organizations NABS, WACL and the Advertising Association—the agency has created the latest iteration in its “Where Do You Draw The Line?” campaign. The new PSA focuses on a bystander to a sexual harassment incident at a holiday work party, in which one male employee is making inappropriate comments and pressuring a female colleague to drink and dance with him against her wishes.

Stephen Woodford, CEO of Advertising Association, says the campaign “brings into sharp focus the important role of the bystander to report incidents if they see something happening.”

The film, directed by Another Film Co.’s Steve Reeves, is being released along with posters timeTo is asking companies to distribute to employees alongside any information they hand out for holiday parties. The posters are also being distributed across print and digital outlets in the U.K. and feature comments drawn from real situations including “You’re such a good worker / I want to see your potential / so go and get us some shots / we need to loosen you up” with the tagline, “Where do you draw the line?” Endorsing companies are also being asked to send a letter to their employees that pledges a commitment to protecting them from sexual harassment this holiday season and encouraging them to “speak up” if they “see a line being crossed."

“Sexual harassment is a real and current problem in our industry and the Christmas office party is a known high-risk environment for incidents to take place,” says Helen Calcraft, Lucky Generals founding partner. “No one should experience sexual harassment and certainly no moment witnessed by another should go unreported.”

Walrus gobbles up a win

Lowes Foods—a supermarket chain founded in 1954 that operates in the Carolinas and Virginia—sends its media and creative account to independent agency Walrus following a review led by Ark Advisors. The appointment comes as Lowes Foods looks to scale its business. Walrus says it will be tasked with delivering a campaign that builds awareness, drives consumer consideration and attracts new households. The agency expects to launch a new regional brand campaign for the company in the first quarter of 2020. The creative will focus on the supermarket chain’s in-store food experiences like its Beer Den, Pick & Prep and Chicken Kitchen stations.

“We’re proud of what we have built over the last few years and look forward to this next phase of growth,” says Heather George, SVP of brand strategy at Lowes Foods.

Creative agency Quiet Storm has been tapped to help The View From the Shard, a London tourist attraction in the city's tallest building, reposition its brand in 2020 as it works to enhance its visitor experience. The agency is tasked with developing and launching a new identity for London’s highest lookout attraction.

Through a new brand positioning and upgrades to its experience, The View From the Shard is looking to boost its proposition “as a must-go, iconic destination” for U.K. and international visitors. The appointment follows a competitive pitch. “The View from The Shard is the very peak of the building and the highest point in Western Europe,” says Trevor Robinson OBE, founder and executive creative director at Quiet Storm. “We are very proud to be working with the team at The Shard who want a launch campaign that’s as iconic and unconventional as the building itself.”

Valent U.S.A. names independent agency Barkley as its integrated agency of record. Under the partnership, Barkley will provide services including brand strategy, digital, creative, paid media, public relations and design for the brand.

The Walnut Creek, California-based company describes itself as a developer and marketer of products that advance sustainable agriculture, protect crops, enhance crop yields and improve food quality. Barkley says it has been working with the company since March in unifying its brand across products and portfolio communications and strengthening its positioning on sustainability. This new designation for Barkley is an expansion of the relationship. “We aim to partner with Valent on a completely revamped brand strategy and visual guidance that matches where modern agriculture is headed,” says Jason Parks, chief growth officer of Barkley.

Wavemaker—the WPP media, content and technology agency formed in 2017 by the merger of MEC and Maxus—names Anna Hickey as president of global clients. She previously was chief operating officer of Wavemaker U.K. and will now be part of the agency’s global leadership team. She is responsible for maintaining and driving global best practices, client leadership, client growth and new and existing client relationships. Hickey has been with Wavemaker since January 2018, helping support it through its launch year as its managing director. She has also served previously as managing director for Maxus as well as in senior client and strategic roles within the larger GroupM and Dentsu Aegis Network’s Carat. Hickey will remain based in the U.K. and assume the new role in February of 2020.

“Client leadership has over the years become too akin to project management when it should be focused on nurturing and developing truly valuable partnerships with our clients that lead to enhanced growth for their business,” Hickey says.