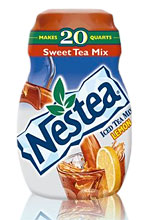 The brand -- owned by Nestea but marketed by Coke in the U.S. -- sees only about $4 million per year in annual media spending, per Kantar Media, but it's had an aggressive and innovative presence online.

Venables' major initiative was a highly interactive website dubbed "Liquid Awesomeness" that attempted to reposition Nestea for a younger audience. The site featured a 20-something character named "Steve" who claimed drinking Nestea would give him superpowers, and challenged visitors to prove otherwise by, among other things, throwing him from a mechanical bear.

The site won numerous accolades, including a spot on the shortlist at Cannes.

Venables remains on Coke's agency roster, having picked up the marketer's Gold Peak brand last year. It's other key clients include Intel, Audi, ConocoPhillips and Barclays. "When we started on Nestea, they intended to target yoga moms. We give them a lot of credit for following our lead to completely re-position the brand and target millennials," agency founder Paul Venables said in a statement. "Turning a ship like that is one of the more fun and rewarding things an agency can do."

For Zambezi, the win signals a growing relationship with the beverage giant.