After 75 years, Southfield, Mich.-based Doner -- one of the biggest independent agencies in adland -- has handed over an ownership stake to Toronto-based MDC Partners, according to industry executives. In a rare move, MDC has made an exception to its usual approach of taking a majority stake in agencies, and is making a minority investment in the shop. 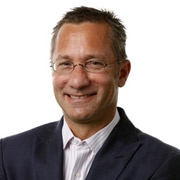 David DeMuth
The deal marks MDC Partners' fourth agency purchase in 2012. The holding company shows no signs of slowing its acquisition spree of the past few years, despite CEO Miles Nadal's insistence to the contrary. Just last month he told Ad Age that the company won't do as many deals as it has in the past few years, and that three of four a year were probably a better pace going forward.

But it's only April, so it won't be surprising if more deals are on the horizon.

MDC has lately been focused on investing in media agencies, including its purchases of R.J. Palmer and TargetCast. It's getting a bit more of that in Doner, which is not solely a creative shop -- its integrated model includes media-planning and -buying functions.

Doner has a link to MDC via co-CEO and Chief Creative Officer Rob Strasberg, who prior to Doner spent time at MDC-owned CP&B. Mr. Strasberg and co-CEO-President David DeMuth have been running the agency since a management upheaval caused by the departure of the agency's former chief Alan Kalter. In 2009, Mr. Kalter sold his stake in the agency to Messrs. DeMuth and Strasberg, and another former exec, Tim Blett, after 43 years with Doner. That move came after a massive layoff at the agency that affected more than 100 staffers, and Mr. Kalter's exit came amid legal issues over pension-fund problems. Mr. Blett left Doner in June 2011, selling his nearly 30% ownership stake back to the agency.

Terms of the deal with MDC were not known at press time, and representatives for both Doner and MDC declined to comment.

Doner -- which was earlier known as W.B. Doner & Co. -- opened in 1937 in Baltimore. Its founder Wilfred Broderick "Brod" Doner died in 1990 at the age of 75, and some years later the shop dropped the initials from its name. The agency has a tumultuous history. It's long been one of the biggest indie shops, but its rise from a regional to a national and then international firm was literally sparked by a fire that destroyed its Southfield office in 1996. Doner used that occasion to reinvent its business model and chase high-profile clients such as Mazda.

Today, Doner also has offices in Cleveland, Newport Beach, Calif., and London. The agency's clients include Perkins, Pennzoil, AutoZone and work for Chrysler. Doner was the agency behind the carmaker's controversial Jennifer Lopez work for the Fiat brand.