In June, Havas New York Chief Creative Officer Harry Bernstein fielded more than 2,000 text messages from potential interns. The hopeful pitches were sent directly to his personal phone as part of the agency's "Text Me Harry Bee" campaign, a ploy to cut down on bureaucratic gatekeepers and cast a wider recruitment net focused on ideas rather than portfolio. He hired 50 as interns in the hopes that they would bring fresh ideas and leave a lasting impact on the agency itself.

They have. Last week, Havas New York took the first step in a lengthy and ambitious greening initiative, led by a group of interns. As part of its "Make Ideas, Not Trash" platform, the office no longer supplies single-use plastic straws to employees. But unlike Starbucks, which began phasing out straws last month, Havas also gave all 1,200+ employees in the building a stainless steel straw to wash and reuse.

If every person in the Havas NY Village uses one plastic straw a day, we are throwing away 400,400 straws every year. 500MM straws are used every day in the US alone - enough to wrap around the earth two and a half times, polluting our oceans and beaches, and threatening wildlife that reside there. Starting now, Havas is leaving plastic straws behind. Shout out to our interns for helping us make a positive and real impact around our office. Metal straws for every employee ✌️ #makeideasnottrash

In the coming weeks, workers will also receive a sustainability starter kit, including a branded tote bag for grocery shopping, stainless steel silverware in a carry pouch, a 16-ounce Mason jar and a bamboo toothbrush.

"If you think about it, every toothbrush you've ever used in your life is still on this planet, and it will probably still be here when you're gone," says Kirsten Bannan, a creative/design intern who worked on the greening campaign. "You start your day off brushing your teeth, so it reminds you to start your sustainability initiative every day." 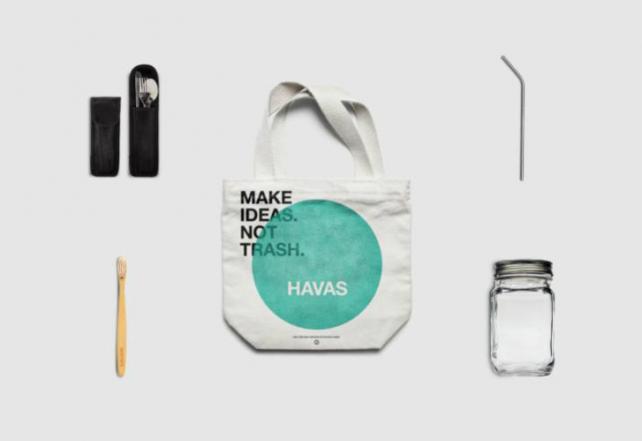 But bigger changes are on the way. Over the next few months, the office will introduce standardized bins for sorting food waste, trash and recyclables, along with color-coded signs and posters that indicate how each new initiative lessens the agency's environmental impact: yellow for energy, orange for compost, aqua for plastic, etc. "We created a system that organizes the sustainable initiatives in the office in a simple and recognizable way," says Josiel Correa, an art director intern. "It was also important for us to create something that got rid of the confusion around the office."

"The creative industry has been gifted with this ability to promote things and use creativity to make change in the world, but do they do it back home?" Bernstein says. "If you're going to be an organization that is building purpose and meaning for brands, we have to start here. It's the lamest most obvious thing, but to me it makes a big difference."

In fact, Bernstein and the interns wanted to introduce even more initiatives, but at this point, some of them, like a greywater reclamation system, are impractical. (Havas doesn't own the building.)

In order to focus on the most impactful and actionable steps, the interns began by sending a 16-question sustainability survey to everyone in the office. Single-use plastics popped up as an obvious issue. "The process didn't begin with the straw," says Claire Winston, a strategy intern. "Changing behaviors is obviously really hard to do overnight, so we figured the straw was a first, easy step to help people begin to tackle these problems and think about it in their everyday lives."

This year's interns were grouped into four teams, two of which worked on sustainability initiatives, one on an education project and one on a diversity venture. The other interns in the greening group are Bria Niland and Gregory Rizzo, account management; Sophia Hiller, content production; Kyrstiane Urbaniak, copywriting and Johanna Ljunggren, creative. 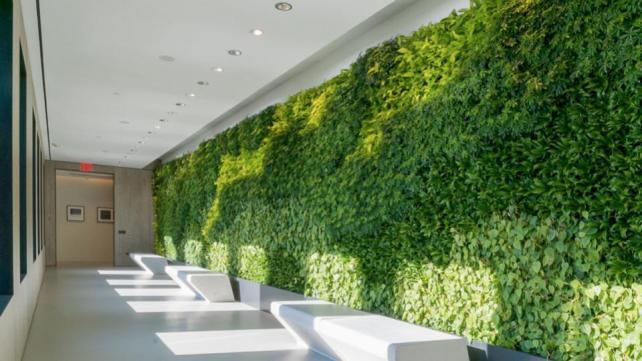 The changes being implemented will be permanent additions to the office. If they're successful, Havas will look into rolling them out at other locations worldwide. "We wanted to leave an impact on the office that would change the complete nature of Havas and its behavior," Niland says. "It's not something that will just disappear."

Bernstein's phone number, on the other hand, has. "That number is so burned," he says. "It started to get a little bit out of control." Texts and calls still go through, but don't expect anyone to respond.