If 'Character Is Destiny,' What Does That Mean for Our Industry? | Ad Age
Skip to main content
Sign In Register

If 'Character Is Destiny,' What Does That Mean for Our Industry?

When Clients See the Character of Our Industry Sometimes Lacking, It May Cause Them to Reconsider Our Worth
READ THIS NEXT
Opinion: Will Sorrell's exit help creativity regain center stage?

"Character is destiny." It's an aphorism I first encountered in high school and dates back over 2,500 years to Heraclitus and the Greeks. And for many months, both "character" and "destiny" have been much on my mind as a result of 2016's acutely surprising and sadly disappointing revelations regarding gender and racial bias, sexual harassment and blatant sexism within the advertising, news and entertainment industries.

"Character is Destiny" is also the title of an op-ed piece that appeared on the opinion page of the New York Times, written by the late William "Bill" Safire in January 2005 (not to be confused with the book of a similar name written by Senator John McCain in 2007).

I knew Bill Safire, the legendary political speech writer and New York Times columnist. We both served as trustees of Syracuse University. When he spoke, I listened. Actually, when he spoke, most everyone listened. And when he penned this particular column, many took notice.

In that column, Mr. Safire reflected on politics both present and possible and foretold political shifts as he saw them. I doubt he ever thought his words would appear nearly a dozen years later in Advertising Age. Nevertheless, his perspective speaks not just to the substrate value system upon which our nation grew and prospered, but also to enterprises of all kinds, even businesses like ours. "For a person, a party and a nation, the element essential to success is character, a word that grew out of the Greek for 'to mark, to engrave.'"

For sure, Mr. Safire was commenting on the politics of the moment and the directions those politics may have been taking our nation. But it was also more than that. He posited a very specific, 2,500 year-old question, "What's the secret to long-run success?"

Mr. Safire was recognizing the qualities of optimism, compassion, fair play and generosity, sacrifice, and honor that were prevalent throughout our nation's history. Qualities that inspired our nation and the world and furthered the advances of liberty, equality, justice and opportunity. All of which are subjects of daily political discussion across our nation in 2016 -- and some of which are subjects of passionate vocational discussion within our industry right now.

I wish Bill Safire were alive today to opine on the subject of both executive and corporate misbehavior. I assume, as implicit in Mr. Safire's view of the human condition, there was the supposition that all too often, what you see is what you will get -- that present behaviors exemplify true character and that, more than likely, those behaviors recur and are predictive of outcomes. So when we experience or observe acts, be they public or private, that by normative societal standards are offensive, objectionable or unconscionable, we can expect a price to be paid down the road for whatever tolerance or indifference allow those behaviors to endure.

For example, personal character was destiny in the Nixon presidency and character will be the primary factor driving whatever destiny either of the current main party presidential choices will attain. Personal executive character shaped destiny for Volkswagen and FIFA, just as character did for Gustavo Martinez and Roger Ailes. It's always only a matter of time.

If, indeed, character is destiny, what is the destiny of any industry where, at the most senior levels, such troubling attitudes prevail, attitudes that belie the supposedly accepted ethos and rhetoric of social justice -- attitudes that ultimately resulted in behaviors that were exposed broadly and were met with outrage?

What is the destiny of any person, any business, any profession where misogyny and racial bias evidence disrespect and manifest the devaluation of employees and colleagues as human beings? And though I imagine that many client companies in the advertising and public relations world are challenged by the same issues that beset their agencies, I also imagine that our clients judge us as leaders, as managers, as business partners and as citizens. I imagine clients expect more from us as creators and purveyors of their messages. I imagine that when they see the character of our industry sometimes lacking, it causes them to reconsider our worth. And so I wonder if "the secret" to our industry's "long-run success" does not hinge on fundamental qualities of character like decency, fairness and good will.

For Mr. Safire, character was shaped by "life's personal decisions." But we all know that life's personal decisions are also character driven. It is an eternal circle. We also know that when we choose to recruit or employ or advance within our organizations people who choose to live their lives with disrespectful, biased, abusive attitudes and behaviors, we pay a very large price. We are choosing to allow them to shred our better values and diminish our better destiny by driving away some of our best players. And, as Jack Welch of GE expressed years ago, "the team that fields the best players wins." 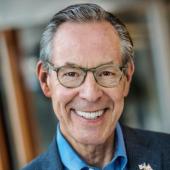