Red, White, and Blue All Over? Humor Across the Pond | Ad Age
Skip to main content

Red, White, and Blue All Over? Humor Across the Pond

At the risk of turning this into a debate over who pronounces "garage" correctly, it's fair to say our different cultural outlooks, unsurprisingly, result in different marketing styles. Here are four I've noticed since making the move across the pond -- with some lessons for marketing.

1. Selling doesn't have to be hard
Traditionally, the method of persuasion most common to British ads is the soft sell. This goes back to the 1950s, when commercials were completely banned from British television. When the practice was reintroduced in 1955, advertisers had no choice but to be polite (of course), quiet and entertaining, to avoid any risk of coming across as American ... I mean, intrusive.

It's safe to say that the polite and quiet part has now fallen by the wayside. In Britain today, there is a real focus on engaging with the viewer by telling compelling, emotive stories, with the product often not mentioned until the very end, leaving the viewer guessing. This is even seen in categories considered to be unexciting or mundane. A perfect example is an ad by British department store John Lewis. Brits want to make you laugh, cry and then buy home insurance.

So, how does this selling technique differ in the States? I've noticed that there is, shall we say, a much more generous use of advertising across the country. This means, in order for brands to cut through the noise of Mustang engines and high-quality meat sizzling on BBQs the size of Devonshire calves, and appeal to the huge and diverse population, they need to be single-minded in their messaging and avoid all ambiguity. This often results in very functional, hyperbolic and product-centric messaging, i.e.: "You need this in your life, buy it now!" In America, the product really is the star, and no one's afraid to say it.

2. Go for the gold laughs
This soft sell approach is also where humor (or, should we say, "humour") really comes into play. As British comedian Jimmy Carr once said of us Brits, "Saying someone can't take a joke is pretty much the worst thing you can say about them." So, it's no surprise that humor is a powerful tool in British advertising. We used it to try and sell home insurance for crying out loud! Comedy, in the right hands, forges a connection with the customer and drives warmth towards a brand. Basically, if you can combine self-deprecation with a dose of understated sarcasm, you've got a winning ad.

American advertising also uses humor to attract attention, but tends to be more playful and light-hearted in tone. DollarShaveClub.com goes for the big, gag-tastic laughs in its series of commercials, which feels to be on the kookier (British) side of advertising here in the States.

So, why is it that British advertisers can run with funnier or edgier ideas & techniques? It has nothing to do with lack of talent or ideas (just look along Madison Avenue for an idea of how big the American talent pool is), but it is likely due to the fact that the U.K. is a significantly smaller, more homogenous society than the U.S. This means that in the U.K., ads can be more subtle and unconventional because most of the country will just get it. It's practically against the law to not have watched everything Monty Python has done. The U.S. market, on the other hand, is too large and diverse to take chances with nuance. They hate John Cleese's "Argument Clinic" sketch in Alaska.

3. Don't worry, be happy
Generally speaking, Americans seem more likely to view tough times ahead as a road to a better future. This is represented in the "American Dream" trope and the almost instinctive desire to achieve greatness, "against all odds." This common outlook is reflected throughout American advertising, with positivity and optimism at its core, as seen in this Nike ad from a few years back.

It rains nearly every day in Britain, so it's hard for us to have that kind of outlook. It wouldn't be unusual to see advertisers employing a more brash tone, with a hint of swagger and an equal portion of depression. I mean, self-deprecation. This reactive and rather controversial ad from Bodyform might be frowned upon by Americans, who tend to reward up front, on-your-sleeve stupidity. By which I mean, niceness.

4. Patriots act
A poll from YouGov has shown that America is one of the most patriotic nations worldwide, with a huge, 41% of people responding to "my country is the best country in the world," which, of course, is hardly surprising when only 47% of Americans have passports! Coca-Cola, Levi's, Ford and Walmart all allow consumers to wear love of country on the sleeves, subscribing to the traditional "All-American" advertising model. Done right, using patriotism in marketing can foster a strong consumer association between a product and the country. Budweiser is leading the way with patriotic advertising with its limited-edition aluminium bottles draped in a camouflage design as a tribute to veterans and military personnel.

Meanwhile, across the pond ... Where it rains. Every. Day. Outward levels of patriotism leave us Brits feeling quite uncomfortable about the whole thing (unless there's a royal wedding or big football match). Generally speaking, when patriotism is involved, it's happening with a whole lot of tongue-in-cheek pub humor, as seen in this ad from Carlsberg.

Although we technically speak the same language, I will never get over the way Americans say "oregano," and there are some clear differences in the way brands communicate to audiences on either side of the Atlantic, too. To achieve emotional resonance with both target audiences, brands should strongly consider context, relevance, values, and customer motivations -- and include a laugh along the way! All in all, the messaging and humor will vary depending on if your audience prefers fish and chips or a burger and fries, but these four marketing principles will stay the same.

Just don't get me started on basil.… 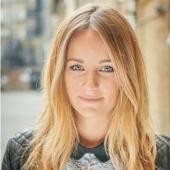