Miller Lite has been tweaking Bud Light for months with ads that boast "more taste" and "half the carbs" of its larger rival. Now Anheuser-Busch InBev is finally responding -- not with Bud Light, but with its economy brand, Natural Light, and supermodel Marisa Miller.

"My name might be Miller, but I prefer to act natural," Miller says in a new video, wearing a swimsuit. "Natural Light that is."

The video, which Miller shared today on social media, marks the beginning of a new endorsement deal that will include a digital content series this summer and fall. Zeno Group is behind the campaign, which uses the hashtag "#Miller4 Natty."

It is common for smaller brands to target larger brands in advertising. The Natty Light campaign allows AB InBev to respond to Lite's aggressive attacks while keeping Bud Light above the fray. 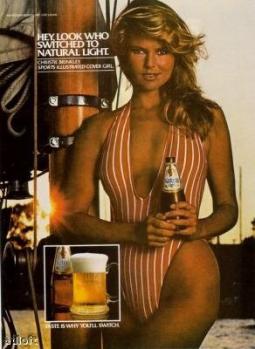 "We just saw an opportunity to jump into what we thought might be a fun conversation. The brand is all about this persona of not taking itself too seriously," said Chelsea Phillips, VP of value brands in the U.S. at AB InBev. "As a self-proclaimed challenger brand it was just an interesting opportunity for Natural Light to be involved in."

The ad is also a nod to an old Natural Light campaign featuring Christie Brinkley, she said. In one ad Brinkley appeared in a swimsuit with copy reading, "Hey, Look Who Switched to Natural Light."

Greg Butler, senior director for the Miller family of brands, said in a statement: "We've been focused on making sure American beer drinkers know we have the better beer and have taken share of the category for the last 10 quarters, while Bud Light has been losing share. Now they are hiding Bud Light behind one of their economy brands. We're going to continue to focus on the fact that we have the superior light beer." (AB InBev-owned Michelob Ultra's long-running tagline is "superior light beer.")

While swimsuit-wearing babes were once common in beer advertising, marketers have made a concerted move away from the tactic in recent years in order to appear more progressive. MillerCoors, for instance, has sought to remove barely-clothed women and frat boy jokes from its marketing as part of a program called "Project Luna." Asked about Natural Light's use of Miller, Phillips said, "She has a co-ed following and at the end of the day Natty Light is a co-ed beverage. For me it's more about the playfulness of the campaign versus what she is wearing. We are sure to keep it tasteful and that is something I prioritize."

Miller Lite, which on Monday named DDB Chicago its new ad agency, started its campaign against Bud Light last September. This summer Lite is visiting bars with a blind taste test against Bud Light called "Know Your Beer," with a goal of reaching 500,000 consumers by the end of the season. The attacks marked a new chapter in the beer wars after AB InBev and MillerCoors mostly refrained from taking each other on by name in recent years.

At store shelves Natural Light has been going after Miller Lite with promos that tout it as "Lighter than Lite" with "1 fewer calorie," along with 30 packs that are selling for $14.00, Beer Business Daily reported last week. Miller Lite has 3.2 grams of carbs per 12-ounce serving and 96 calories, while Natural Light has 3.2 carbs and 95 calories. Bud Light has 6.6 grams of carbs and 110 calories. Phillips said another Natty Light retail slogan states: "Spelled right because it's brewed right" -- a reference to a tagline Miller Lite has used earlier this year stating "Spelled different because it's brewed different." Light's newest tagline is "Hold True."

Natural Light has also attacked Lite on Instagram with the following video:

One. Fewer. Calorie. Go ahead and treat yourself to that extra piece of gum... you've earned it.