Brand is pessimistic on full return to US offices in 2020
READ THIS NEXT
NFL Playbook: Tracking how brands are marketing around an uncertain season 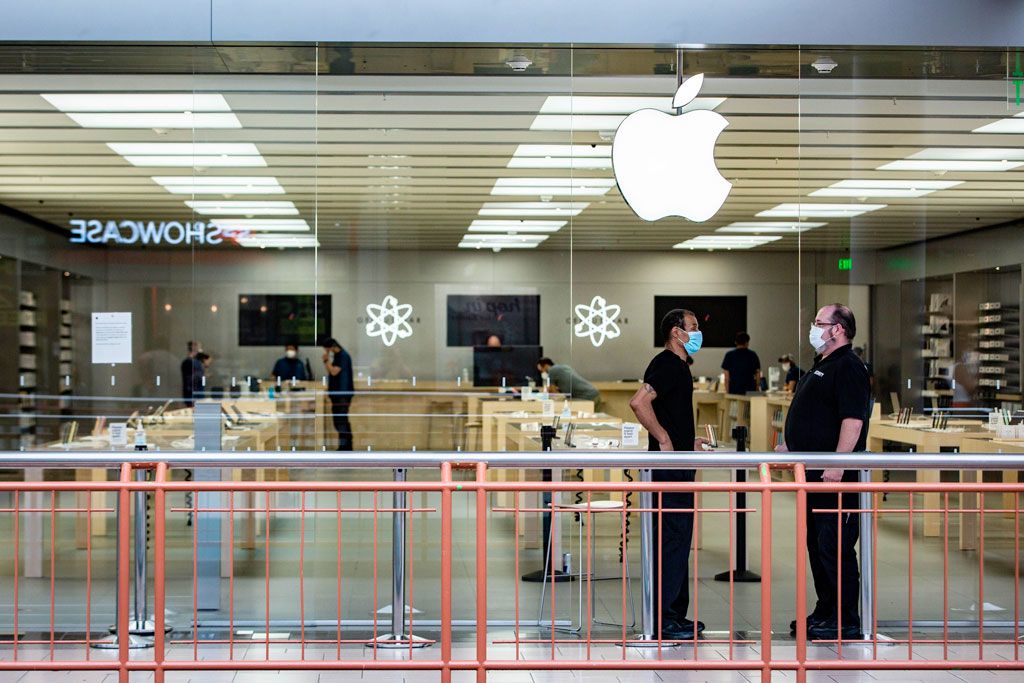 Apple Inc. is readjusting operations as Covid-19 cases continue to spike in the U.S. and some other parts of the world.

The Cupertino, California-based technology giant is pushing retail staff to work remotely as the virus forces the company to shut some of its stores again, according to a video message sent to employees. It is also shipping Covid-19 test kits to employees’ homes, and told staff in a memo that a full return to U.S. offices won’t occur before the end of the year.

In a video shared with Apple retail employees over the weekend, Deirdre O’Brien, Apple’s senior vice president of retail and people, pressed employees working at stores that have closed again to begin working from home to serve customers buying or seeking support for products online or over the phone.

“If your store is closed, please sign up for Retail at Home, please talk to your manager, because we really need to make sure that we shift our teams to greet our customers remotely in this time,” O’Brien told staff in the video. “We may need to be working remotely for some period of time.”

The Apple executive said that given the increase in customers looking to buy or service products online during the pandemic, some consumers are experiencing “significant wait times.”

“This is not the experience that we want to have for our customers,” O’Brien added. “So we really want to make sure that we are moving to where our customers are, to help them during this very challenging time. As you know people are really dependent upon their devices, especially right now.”

In March, Apple launched a program to let retail workers switch to online roles while most of Apple’s stores were shut across the world.

In the video, O’Brien also told staff that, beginning later this month, they will get name tag lanyards for use in store that they can customize with their own Memoiji, Apple’s system for users to create virtual avatars of themselves on the iPhone. This will help retail staff be more recognizable while they wear face masks, she said.

Of Apple’s 271 U.S. retail locations, more than 90 have had to close again due to Covid-19 spikes. The company has also shut some stores again in the U.K. and Australia. For locations that remain open, the company is requiring face masks for customers and employees as well as temperature checks upon entry. “The way we have been managing the protocols has been really effective,” O’Brien said in the recent video.

The company has also started a program that allows retail and corporate employees working remotely to take Covid-19 tests at home. The tests will be shipped to employees, and then the kit can be sent to a testing site for processing. Last month, Apple started letting corporate employees returning to its offices take on-site Covid-19 nasal swab tests.

The company has also shared new information on its plan to return to offices. In a memo to staff last month, the company said, “We currently do not anticipate a full return before the end of the year” for offices in the Americas, but that it does “anticipate full resumption will take place over the coming months based on local conditions” for “many” offices in the Asia-Pacific region and Europe.

Apple recently spent several billion dollars on a new Silicon Valley campus and has hardware-development processes that rely on working from the office.

The company is bringing staff back to its main office in phases, with the first phase having begun in mid-June. That phase was for employees who can’t effectively do their jobs from home, such as those working on future hardware products. In its recent note to employees, the company wrote that “we’ll begin to welcome back team members who prefer to work from the office or those with projects that require them to be in the office, while continuing to significantly limit total occupancy.”