The delivery brand is emphasizing women-owned businesses on its site and reminding at-home NBA and WNBA fans to order food
READ THIS NEXT
The Week Ahead: Delta reports earnings and ANA hosts data and analytics conference

DoorDash is the latest brand with a campaign timed for International Women’s Day, with dual efforts that support women-owned businesses and highlight one of women’s basketball’s stars.

The third-party delivery brand is making it easier to search for and find women-owned businesses to order from. And Chiney Ogwumike, forward for the WNBA’s Los Angeles Sparks and an ESPN commentator, stars in DoorDash’s newest national campaign.

A 30-second “In the Zone” TV spot shows Ogwumike on a surreal basketball court surrounded by dishes she calls out, such as tacos al pastor and lobster roll. It then zooms in on a DoorDash delivery person and basketball fans watching the sport on TV at home while dining.

It’s a bit of a rare play in sports-related marketing, as WNBA stars are not often featured in their own in campaigns unrelated to sports products. 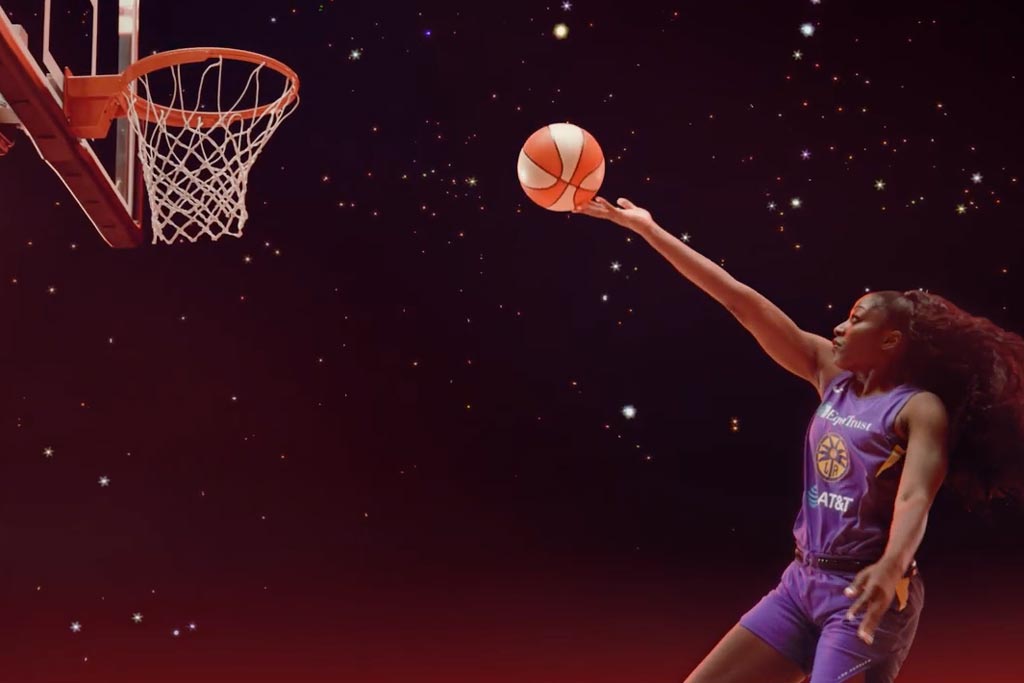 DoorDash, which became an official sponsor of the WNBA and NBA in 2020, is eager to emphasize its brand as one for basketball fans to order from as they watch games at home. The spot is also set to air during the upcoming NCAA March Madness games.

“As a woman trying to balance it all, it is critical to show the world that we will continue to break glass ceilings every day and lift each other up,” Ogwumike said in a statement. “On International Women’s Day, we recognize that women are bosses, and our mission is to open up doors for the next generation to run through.”

The campaign was created internally, and the spot was directed by Brian Beletic out of production company Smuggler.

“We wanted to make sure that we’re really cementing DoorDash with the world of basketball,” says DoorDash Executive Creative Director Mariota Essery. Tying into the WNBA is also timely as the league is celebrating its 25th anniversary, she added.

Ogwumike, says Essery, emulates the brand’s values and is “someone who is incredibly vocal about supporting women as well.”

More Ad Age news on the WNBA and NBA
Clorox becomes official cleaner for NBA and WNBA
Jack Neff
How the NBA is trying to lure viewers back for its unusual season start date
E.J. Schultz
DoorDash partnership with the NBA tips off during the playoffs
Jessica Wohl

Her participation, though, is within the campaign itself, which is separate from DoorDash’s business-focused effort for women.

Hundreds of women-owned, independent restaurants around the country opted into the Made by Women effort, including Goddess and the Baker in Chicago and Kismet in Los Angeles, and more merchants will be added in the future. DoorDash’s Caviar brand will also promote women-led businesses in certain markets.

DoorDash plans to donate $1 per order from Made by Women businesses through the end of March, on DoorDash or Caviar, up to $100,000, to the James Beard Foundation’s Women’s Leadership Programs. And DoorDash announced plans to match loans for women-owned businesses through its partnership with the non-profit organization Kiva.